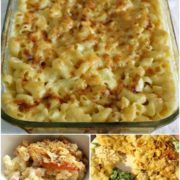 Of all the cook-offs we've held at our house, the Mac and Cheese Cook-Off was one of the best! Read about all the cheesy entries in this friendly competition.

In the last few years, we have held many cook-offs with our friends and they have all been glorious, gluttonous occasions filled with incredibly tasty and creative creations.

We devoured meatballs at the Meatball Showdown, filled the kitchen with crock pots of bubbling and spicy chilis at the Friends' Chili Cook-Off, and watched the sunrise as we smoked brisket and ribs for the Smoked Meat Cook-Off.

At the Lasagna Cook-Off, traditional recipes were changed up to create lasagnas for breakfast, dinner, and dessert! And we even gorged poolside on several styles of tacos, washed down with margaritas at the Taco& Margaritas Cook-Off.

This event, however, was one that many of us have been dreaming of since the very first cook-off. The event landed at the perfect time: in the midst of bleak and freezing winter, but far enough beyond the holidays that no one felt guilty anymore about over-indulging.

Our Mac and Cheese Cook-Off

Twenty-three big people and a handful of little ones filled our house: our biggest cook-off turnout yet.

And all were eager for a mac and cheese-filled afternoon, so eager that some had not eaten at all yet that day!

In anticipation of ten different pans of macaroni & cheese that we knew were coming to our house, we converted our daughter's bedroom into the mac and cheese room.

She was a good sport about it, and in return, hers was the best-smelling room in the house!

The dishes were carefully laid out and labeled with the name and a number (written on jumbo pasta shells.)

I had lofty intentions to take well-framed shots of all the macaroni and cheese entries, including some portioned out into bowls...

but it was not easy with a house full of people restless and ready to dig in.

The eating finally began! Hungry guests and chefs alike filed into the room and loaded their plates with samplings from all ten different varieties.

Some were careful to organize scoops of different mac and cheeses around their plates to remember which was which but most of the plates that I saw were just loaded. Which only meant that they would be *forced* to come back for seconds and confirm their favorites. The entries in this carb-heavy cook-off were:

After so much fevered anticipation the crowd was finally able to relax, with plates of food on their laps and plenty of drinks chilling outside on the freezing deck: beer, wine, margaritas, and maple whiskey.

Kids ate off of their parents' plates and there was plenty more mac and cheese when refills were needed.

Our son's entry of a box of Kraft mac and cheese was at our insistence after he added his name to the list of guests bringing an entry: he did it as a joke but we held him to it!

Almost everyone sampled this too, and it made for an interesting comparison to the homemade varieties. (Sometimes mac and cheese cooked from a box still holds a strange and comforting appeal.)

When the feasting began to wane we set out a basket of ballots. Guests were asked to vote for their top three mac and cheeses, and there was a second round of voting for just the chefs to choose their favorites.

And these votes were not decided lightly: there were quiet discussions, loud discussions, and lots of pacing through the Mac and Cheese room to ponder the myriad flavors, textures, and cheesiness. Once we had all the votes in hand the tallying and tabulating began, handled by my husband, Anna, and Paul.

This was another very serious and lengthy deliberation that took place closed doors. It's possible that tabulation time was somewhat hindered by the effect of pounds of pasta and cheese (and a bit of drink) on the judges' brains!

The winners were finally announced.

Taking the top spot, the winner of the Popular Vote was the spicy Buffalo Chicken Mac and Cheese submitted by Becca!

And the winner of the Chef's Vote was the decadent Crack Mac submitted by Kari & Eli!

More than any other cook-off to date, this was no doubt our best. Macaroni & cheese is a dish that almost everyone loves, adults and kids alike. It's a dish that can be as simple or as decadent as you wish, and one that is easy to pull together no matter what level of cooking skill you have.

For such a simple and straightforward pasta dish, the variations that we saw at our cook-off were so varied and creative. Spiced up with chipotle peppers and buffalo sauce, loaded with basil and garlic, paired with diced ham and tomatoes (which is classic and always delicious,) or made with multiple kinds of cheese to make a creamy and rich dish.

If you are considering hosting your first cook-off, a Macaroni & Cheese Cook-Off would be a great choice.

Don't just lay there dreaming about a Macaroni & Cheese Cook-Off... make it happen!

Here are links for the two winning recipes from our Cook-Off:

And if you're in the mood for more cheesy foods, check these out: