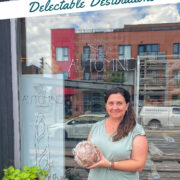 To celebrate both our 22nd anniversary and finally being able to resume travel into Canada, my husband and I spent the day looking for pastries and ice cream in Montreal.

Montreal is a favorite destination for our family, especially for an overnight trip, but since we're only about two hours from the city, even on a day trip there's plenty to do.

Some of our past favorite spots

Our favorite stops in the city over the years included baseball games at Olympic Stadium, where the Montreal Expos (now the Washington Nationals) would play other major league teams in an enormous, indoor arena—but with small crowds, maybe 2,500 people in attendance. They were fun games to go to, especially with our young kids.

Next door to the stadium is the Biodome, an indoor zoo with different habitats where Christian could visit one of his favorite animals: the capybara. We also loved to visit the Botanical Gardens and the cobblestone-paved Old Port area with restaurants and street vendors.

Just before the pandemic, we found a few new favorite Montreal destinations, including Anatol bulk spice shop for me, the massive Comic Hunter comic store for Christian, and the Jean-Talon open-air market that teems with food stalls, bakeries, and fresh fruit and veggie vendors. Since we can't bring produce back to the States with us, we usually just walk around devouring baskets of berries and currants.

Finding bakeries and ice cream in the city

For our 22nd anniversary trip, we hit Comic Hunter again, but instead of our other usual haunts we tried a new approach. I researched several Montreal bakeries from a few different "best of" lists online and chose a few to check out so we could bring home a treat or two.

A popular ice cream shop turned up in the search, so we threw that in as well. It was a fairly hot day, so we couldn't resist.

Here are the bakery and ice cream treats we found and enjoyed in Montreal.

Our first bakery stop was the hip Automne Boulangerie. A little info about this shop:

The biggest challenge in any bakery is trying to narrow down all the incredible options to finally make a choice. All of the loaves at Automne Boulangerie looked so perfect and enticing—the torment!

The loaf I finally chose to bring home from Automne was a blueberry and ginger boule, a hearty loaf made with white and rye flours.

I love, love, love this loaf with sweet and chewy blueberry bits throughout each slice. At first, I couldn't taste any ginger but then realized that the bread has bits of candied ginger scattered throughout. And when I caught an actual chunk of ginger in my slice, there was no missing it: sharp and intense against the sweet berries.

I think this flavor combo in bread is so unique. I fought the urge to eat the whole loaf in one day, and instead froze half of it to make the experience last a little longer. Toasted from the freezer and spread with some butter, it's divine.

Try ginger and blueberry together with mango in this bread pudding recipe.

Our next stop was for ice cream at Kem Coba, an adorable little hole-in-the-wall ice cream counter. A little history about this shop:

When we arrived it was easy to see that Kem Coba is a local treasure. That famous line of customers stretched down to the street corner, with dozens more people seated outside the shop with their ice cream cones.

Kem Coba has wonderfully unique flavors to try, including limited edition flavors that last only a week or two. Though that day's flavor—orange, cardamom, and raspberry—sounded amazing, we went for some different licks.

Christian had one scoop each of mango and passion fruit sorbets, refreshing choices for the hot afternoon. I went for the rich stuff: a scoop of beurre salé: salted butter ice cream, along with a scoop of fig-orange. As the French say, they were incroyable!

It's hard to describe that salted butter flavor. My first impression was that of caramel, which I think was a bit of a mind trick from the salt and the butteriness of the ice cream. It was so creamy and indulgent.

Somehow, the butter made it taste more authentic—kind of like the difference between generic, store-brand ice cream and a Ben and Jerry's pint. It was freaking amazing.

I was also tickled with the fig-orange. I've never had fig blended into ice cream before, and it is a genius pairing. That sweet, dark fruit flavor with the creamy base, and zingy flecks of orange zest throughout... just perfect.

I also loved Christian's sorbets. They had the intense flavors of tropical passionfruit and mango: fruits so pure, perfumed, and seductive that when you taste them you kick yourself for not eating them every day of your life. As sorbets, they're literally sunshine in a cone.

In my opinion, Kem Coba is worth standing in line for!

After ice cream, we drove to the bakery Au Kouing Amann, named for their signature pastry, the kouign amann! A little history about this shop:

I've seen kouign amann on the Great British Bake Off, but have not as of yet tasted one, which is why I was excited to get a couple at this bakery.

Kouign amann have laminated layers like a croissant, but are traditionally made without any fats or sugar in the dough. The pastries are topped with sugar and shaped as single-serving pastries or sold in larger rounds.

Imagine my chagrin when I arrived and discovered they were SOLD OUT. Crumbs!

Now to be completely fair to Au Kouing Amann, we didn't get there until 4:00 pm. With most bakeries, you're lucky to even find one still open that late considering that bakers begin their work hours before dawn. So I do not fault the bakery: the early birds got the pastries!

I played it cool and instead took home one of their gorgeous, flaky chocolate croissants as well as a chocolate-filled milk roll. The croissant was perfect, with a shiny slightly chewy outside and tender, airy layers inside and a dark chocolate center.

The milk roll was brioche-like and also very soft, with the same chocolaty filling. They were wonderful treats that afternoon and were clearly made with care and precision.

Some day we'll stop by again, although earlier in the day so we can get a kouign amann!

The next stop was an interesting little place called Ol' Sweet Pastry, which specializes in just one thing: the chimney cake. A little history about this shop:

The first thing we saw when we entered Ol' Sweet was a long, white wall holding poles with wooden ends shaped like cylinders or cones. Curious!

Kürtőskalács, or chimney cake, is a traditional pastry of Dracula's old hometown, Transylvania, as explained to us by the young lady at the counter—who, fittingly, had a goth look going on. A requirement to work there, perhaps? (Just kidding!)

She explained that chimney cakes are made by wrapping pastry dough around a wooden cone or cylinder at the end of a long pole. It then goes into the oven to bake right on the pole.

Traditionally chimney cakes are baked over a fire where the pole is rotated, rotisserie style, to bake the cakes on all sides. At Ol' Sweet there are little, convection oven-style boxes that hold the dough and mold and rotate them. Once baked, the finished pastry is doused in cinnamon and sugar, then slid off the end of the pole.

Here's the best part: the hollow center of the chimney cake can then be filled with ice cream, or spread with peanut butter or Nutella! As much as we would've loved to try one of those fillings, this pastry had to make it back home to the States, so we took it as it was.

Their chimney cakes are baked to order, and the staff really wanted us to try a piece at its best which is while it's fresh and hot. So we unwound a little sample—and they were right.

The cinnamon-sugar coating had me expecting a texture like a donut, but it was actually different than that. It had a thin, crispy surface which gave way to a slight chewiness. The inside of the pastry cylinder, where the dough had baked against the dowel, was sooo soft and tender!

Even once we were home hours later, the pastry still tasted amazing. I think this shop will be a regular stop on future Montreal trips.

Here's another way to enjoy cinnamon and sugar: in an Apple Cider Donut tour.

The last destination on our list took us into Chinatown to look for Dragon's Beard Candy sold out of a storefront of the same name. A little history about this shop:

It's easy to miss this spot, tucked between other businesses on De La Gauchetiere, because it's literally just a stall. When you walk up you can choose a preassembled box of dragon's beard candy or buy a single piece.

He showed me that the candy begins with a little cup of jelly-like sugar that's hand-pulled into thousands of wispy strands that look as fine as cobwebs. The strands form a sort of nest into which he places a filling of finely chopped peanuts, sesame seeds, chocolate, and coconut. The strands are folded around the filling to make individual pieces.

Here's a video showing how surprisingly fast this candy is made:

Mr. Chin told me that the best way to eat dragon's beard candy is this: place a whole piece in your mouth and let it sit on your tongue without chewing until the sugar dissolves.

Did I listen? Of course not!

Instead, Christian and I tried to bite right into a piece. Do not do this: the sugar threads are surprisingly strong, so much so that it's like trying to bite through a roll of gauze. And then the filling spills out.

With the next piece, I followed his directions and let the candy sit on my tongue. As the sugar strands softened and dissolved, the candy had a chewiness almost like taffy. After several seconds the filling was released and then the candy had a crunch from nuts and seeds against the chewy sugar.

Dragon's beard candy was definitely the most unusual treat we had on the trip. I've never had anything like it, and it's worth giving it a try!

Au revoir, Montreal. We'll be back!

We wrapped up our trip with dinner in Old Montreal, where sadly many of the menus at the casual restaurants that line the cobblestone streets are surprisingly identical and the food a bit meh. However, it was still nice to sit with a couple of beers and a plate of nachos to get our energy back.

We searched for black sesame ice cream (here's a recipe for something similar) that I had in Old Montreal years ago but had no luck finding the shop. (A victim of the pandemic, perhaps.) We settled for scoops of coffee and pistachio ice creams, which were a lovely treat before beginning our drive back home.

And now that the border is back open to visitors from the U.S., it won't be long before we visit again.

Have you been to any of these bakeries and spots in Montreal? If yes or if you head there after reading about our visit, leave a comment below!