Our friends brought their best tacos and margaritas game (and their appetites) to this tasty, summertime cook-off!

To paraphrase the Food Lover's Companion, a taco is a Mexican-style "sandwich" consisting of a folded tortilla, crisp or soft, filled with various ingredients, which may include meats, veggies, cheese, guacamole, beans, salsa.

This definition was the only rule per se that the participants of the Taco & Margarita Cook-Off were given. From there it was open to interpretation!

A perfect day for a cook-off

The day we chose for our taco-off was particularly sublime: hot and sunny, with a gentle breeze for those of us sitting on lawn chairs in our backyard, and plenty of sunshine for all who chose to jump in the pool.

Along with the adults there was a gaggle of toddlers, an infant and a small gang of teenagers on hand for the food and fun.

At various times the groups of kids of varying numbers were swimming, sleeping, throwing footballs at each other, playing King of Tokyo, and sneaking food off their parents' plates.

To whet our appetites for tacos we had three zesty dips, all homemade by Hillary:

They were a perfect accompaniment to — the margaritas.

We enjoyed three kinds of margaritas that day. They were all delicious and welcome on a hot summer day, and each with a distinct flavor. Rebecca brought classic margaritas: lime juice, Cointreau, tequila and salt, served over ice. They were made all the more tantalizing by the wait, as we eagerly watched their assembly (by Rob, who by offering to make our drinks was then forced to wait to enjoy his own!)

From delayed gratification we went to instant gratification, in the form of pitchers of margaritas. Kari and Eli provided frozen, slushy, Watermelon Margaritas in alcoholic and nonalcoholic versions. The watermelon drinks were bright pink and so cheery in a tall decanters. Margaritas are already pretty dang refreshing, and these even more so thanks to refreshing watermelon sweetness.

Lisa and Andrew brought a big pitcher of margarita made with Key lime margarita mixer from Stirrings. It was thirst quenching and so addictive thanks to a big dose of sugar!

The summery breeze and bright sunshine made a perfect backdrop for these sweet-tangy drinks. We never did get around to voting on the margaritas, but after we had them we realized that we were all really, freaking hungry for tacos.

My entry in the taco-off was a brisket taco, made from a hefty beef brisket fresh off the smoker. The brisket spent the previous night bathing in a Spicy Wet Rub that I whipped up, made of sautéed onions, garlic, Urfa pepper flakes and apple cider vinegar.

Because I have a Kamado-style ceramic smoker that holds heat so well, the 6-pound brisket was done in about 4-1/2 hours. The finished brisket was smoky, had that desirable pink smoke ring, and plenty of the heat from the wet rub.

I chopped the brisket and piled it into hand-shaped corn tortilla taco shells that I seasoned with adobo before crisping them in the oven. The tacos were then topped with sautéed onions, queso sauce, and cilantro.

The peanut sauce and crisp cabbage were an unexpected twist on traditional taco fillings. They were amazing. My daughter declared these here favorite of the savory tacos, and others agreed because the tacos disappeared quickly!

Continuing on the theme of creative taco twists, the third savory taco contender was from the team of Chris and Rob who used Smoked Pork Butt, made at Rob's. The smoky, shredded pork was paired with a flavorful Quick Spicy Kimchee.

To top their tacos Chris and Rob had a homemade, tart Salsa Verde. They also had my favorite, homemade Habanero Carrot Hot Sauce.

The Habanero Carrot Hot Sauce is a staple at The Mad Taco Restaurants in Waitsfield and Montpelier Vermont. Chris found the recipe in the Vermont Farm Table Cookbook by Tracy Medeiros. Though the sweet carrot in the sauce helps balance the habanero heat, it is still a REALLY hot sauce with brilliant flavor. We found that the sauce a few days later was even more intensely spicy. It's serious stuff!

The multitude of ingredients in their taco was astounding, and every layer rich with flavor and heat.

It seemed at the start to be way too much food and drink for all of us, but every ounce of every taco was devoured. I nearly missed out on a chance to try the pulled pork and kimchi taco (I don't know what I was doing, holding a baby or something) and had to take one out of someone else's hand to get a taste!

I was happy with the flavors I created for my taco entry, but what I didn't expect was that the most popular component of the taco was the Easy Restaurant Style White Queso sauce, a recipe from The Cookie Rookie. It made a cool topping on the spicy brisket taco, but we also used as a dip, for tortilla chips, veggies, and anything else we could find to dunk.

The grand (and I do mean grand) finale of the cook-off was the dessert taco entry by Kari.

She brushed wonton wrappers with butter and a cinnamon-sugar mixture, draped them over the edges of a baking pan and baked them to give them a taco shell shape. The fillings for these sweet little tacos were sliced strawberries, topped with a creamy mascarpone and honey filling. They were incredible, cinnamon-y and sooo sweet.

Kari was, of course, very modest about this creation of hers. She didn't use a recipe: just her brilliant dessert instincts.

We created a separate Dessert Taco category for Kari's creation, and immediately declared her the undisputed winner.

As for the savory tacos, the secret voting at the close of the cook-off revealed: that my brisket tacos took top spot! (Cue the fanfair.) However, they only barely nudged out the other two delectable tacos. Though folks denied it, I highly suspect that the popularity of that White Queso sauce was key in my win. (Thanks Cookie Rookie!) I guess the lesson here is never underestimate the power of queso!

Below are the recipes for the various dips, drinks, and tacos from our cook-off. Give them a try — and hold your own Tacos and Margaritas Cook-Off! Links to check out the cookbook, smoker, and food products are also below.

Spicy Wet Rub
This is a flavorful and spicy rub for meats headed for the grill or smoker. Cook up this rub on the stovetop and then rub it into the meats.
Take me there 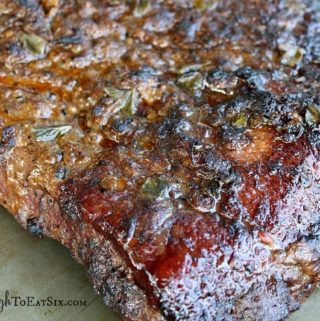 And we did it again the next year: the 2nd Annual Taco & Margarita Cook-Off.

Hungry Enough To Eat Six is where you'll find casual, family-friendly and creative recipes. Like foodie travels? Come along with me to Delectable Destinations!