Just shy of the one-year anniversary of our very first cook-off, we held our latest in a most delicious series of friends competing against and feeding friends. Once again we gathered, we drank, we ate, we voted, and we ate some more!

Our first cook-off was way back last November, the Meatball Showdown. That was followed by the Chili-Off, with an army of chilis in crock pots descending upon our house. A few months later we stuffed our guts at the Stuffed Meat Cook-Off. In August we closed out a beautiful summer with the Brisket & Ribs Smoke-Off.

The weekend's addition to the Cook-Off legacy was the much-anticipated Lasagna Challenge! 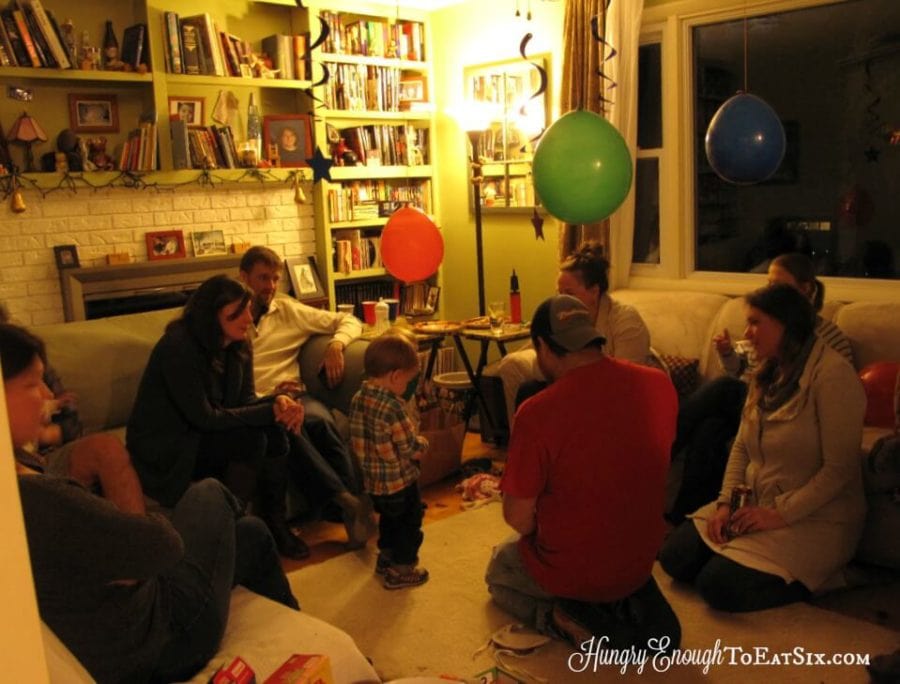 It was definitely time for a comfort food-themed cook-off and this one had nine lasagna entries - a new cook-off record! Several people arrived saying they had not eaten all day in anticipation of this feast. Our crew also took the challenge to a new level by creating three categories of lasagna entries: Breakfast, dinner, and dessert.

The day of the competition was perfect for the comfort food theme: drizzling, windy with brightly autumn leaves contrasted against a chilly, gray sky. No snow yet, but cool enough that the deck became the beverage cooler zone.

Fourteen adults, two kids and three babies filled our tiny house. The kitchen table was loaded with casserole dishes of lasagna, plates of dressed salad, and a big bowl of crisp and buttery garlic bread. Because this gathering was a joint lasagna competition/birthday celebration for my husband, there were also giant jars of dill pickles and pepperoncini on the table. Nothing to do with lasagna, but they are some of his favorites! 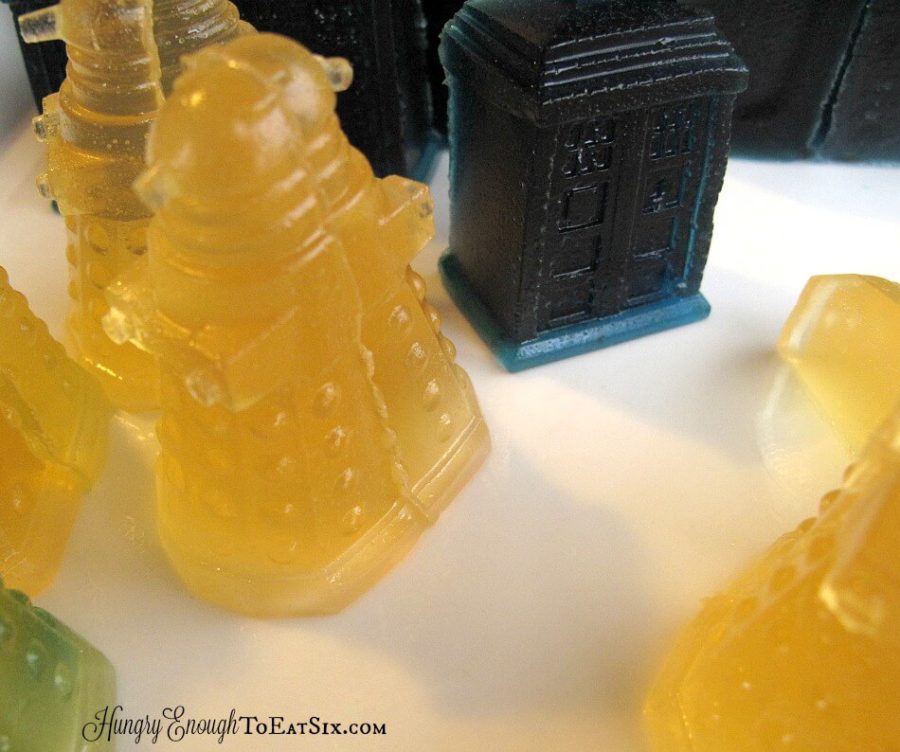 There was also a tray of jiggling Doctor Who-themed Jell-O shots: yellow Daleks and blue TARDISes in the flavor of Red Bull and vodka. Like bow ties and fezes, they were cool!

Accompanying all this food was plenty to drink. The beers included, Harpoon, Long Trail, Long Trail Smash Project, Sam Adams, Guinness Blonde, Brooklyn Oktoberfest and PBR. We had more wine at our house than I've ever seen before: Chianti, Cabernet, Malbec, Chardonnay and a couple of bottles of Champagne!

With this gathering coming together in late afternoon, everyone was ready to eat immediately. But, the satisfaction was delayed. For one entrant to cook his lasagna! 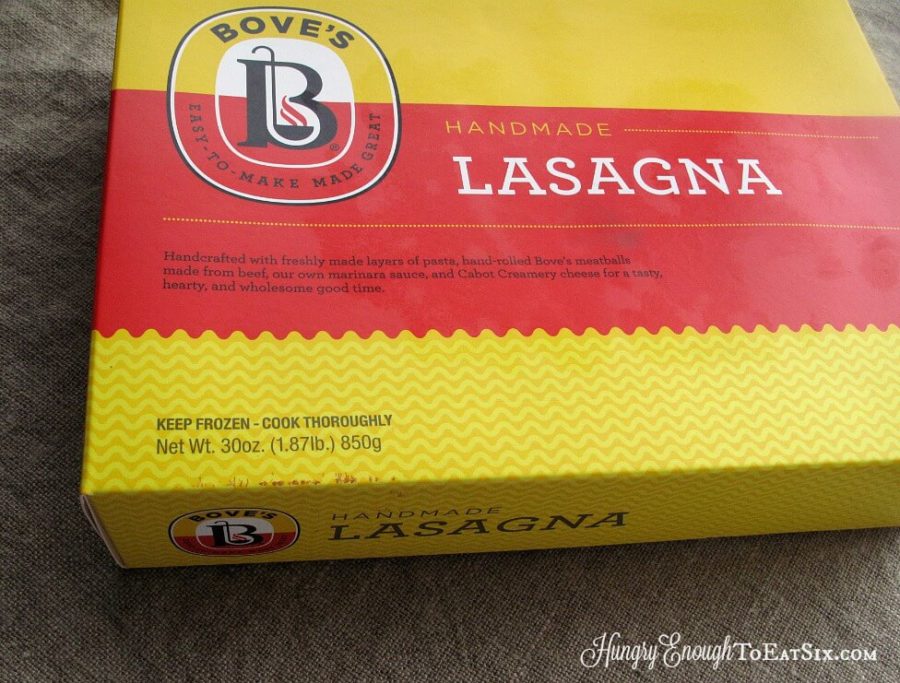 The raw ingredients came to our house and were cooked up... fried up actually, in our frigid backyard on the grill. This fire hazard waiting to happen (with my grill pulled up dangerously close to our house) was interesting to watch unfold. There was arguing, mad dashing up and down deck stairs for barbecue tools, paper towels, more beer. All while smoke billowed from the grill. This hot mess amped up the anticipation and our appetites even more.

Finally it was feeding time! Taking small portions of these cheesy, luscious lasagnas required a lot of self-control. That wasn't easy after fasting all day and several beverages consumed. Samples of each lasagna were carefully arranged on each person's plate so that they could savor and also keep track for the voting to come. The six main course lasagnas and one breakfast lasagna were all put out. Two dessert lasagnas were held back for later.

Here are the main course and breakfast lasagnas. Click on the pictures to be taken to the recipes!

For the Peoples' Lasagna Choice vote, guests were asked to choose their top 3 lasagnas. There was also a separate Chef's vote for the lasagna chefs to vote for their favorite. 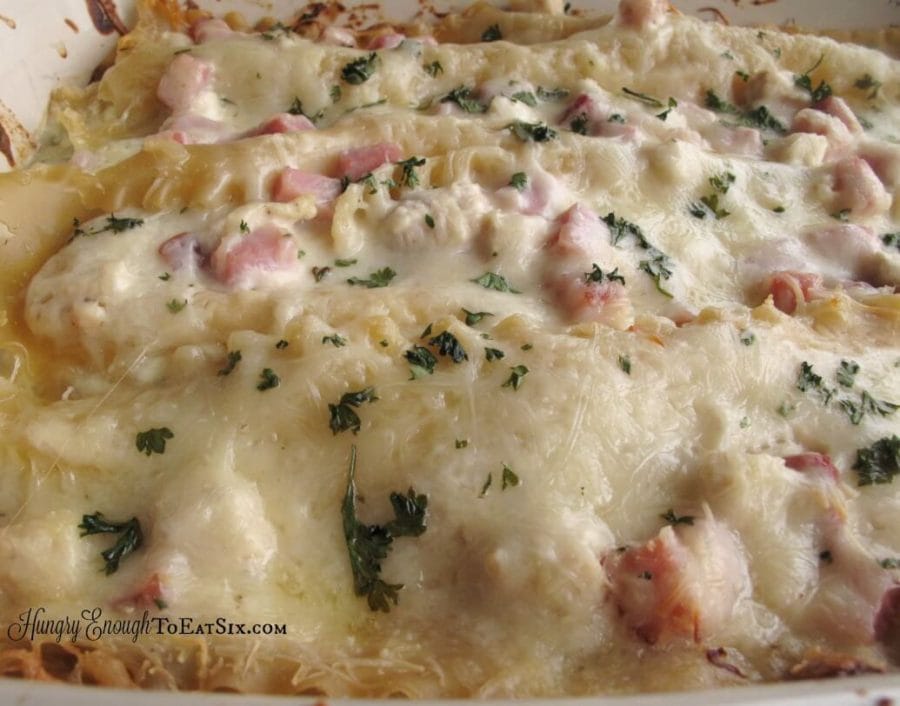 These lasagnas were rich and savory with cheese sauces in both. Hillary's had the classic Cordon Bleu flavors of ham, chicken and Swiss Cheese. Rob's combination of spinach and artichoke rolled up in the noodles was a delicious twist. And the Chefs Choice award went... to Hillary's Chicken Cordon Bleu! Congratulations to Rob and Hillary!!

Though there were only two winners, a whole boatload of rich, full-flavored lasagna was enjoyed by all. People back very quickly for seconds and thirds.

It amazed me that no one prepared a traditional lasagna (excluding Papa Frank's Restaurant.) All of the entries were unique and incredibly creative! The Black Bean Lasagna had delicious flavor and appealing texture. The Breakfast Lasagna was decadent with generous amounts of sausage and cheese layered throughout. The White Veggie lasagna was rich and creamy, with abundant broccoli and spinach. The Fried Lasagna did not disappoint, and also received many votes! There was not as much of it, due to some trial and error on the backyard grill. However the pieces we tried had the satisfying fried crunch surrounding classic lasagna flavor. The Papa Franks restaurant lasagna, though not homemade was still gobbled up and enjoyed.

In addition to several rounds of lasagna, there was also more impromptu frying: my husband's birthday pickles and pepperoncini were dredged in egg and flour and then fried up on the stove top. They were consumed quickly and were an unexpected middle-course between the main course and dessert lasagnas.

Speaking of which, let's get to the dessert lasagnas! Once everyone was sufficiently stuffed it was time to roll out the sweets. Here are the two dessert lasagna entries:

This Ice Cream Lasagna was created specially by Kari for the birthday boy. Caramel and butter crunch are his favorite ice cream flavors. This dessert had not only these two ice creams, but also ample Sea Salt Caramel Sauce and crushed 'Nilla wafers. It was incredible and over-the-top. Kari was sadly not feeling well and absent from the party, but her adoring fans quickly showered her with praise-filled texts and Facebook posts! 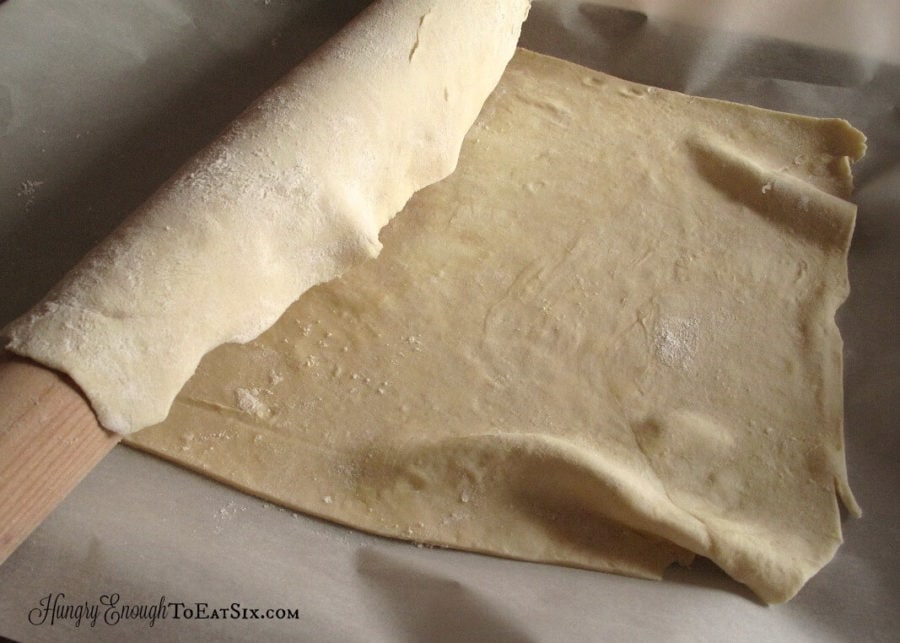 I am very happy with how my Apple Pie Dessert Lasagna came out. 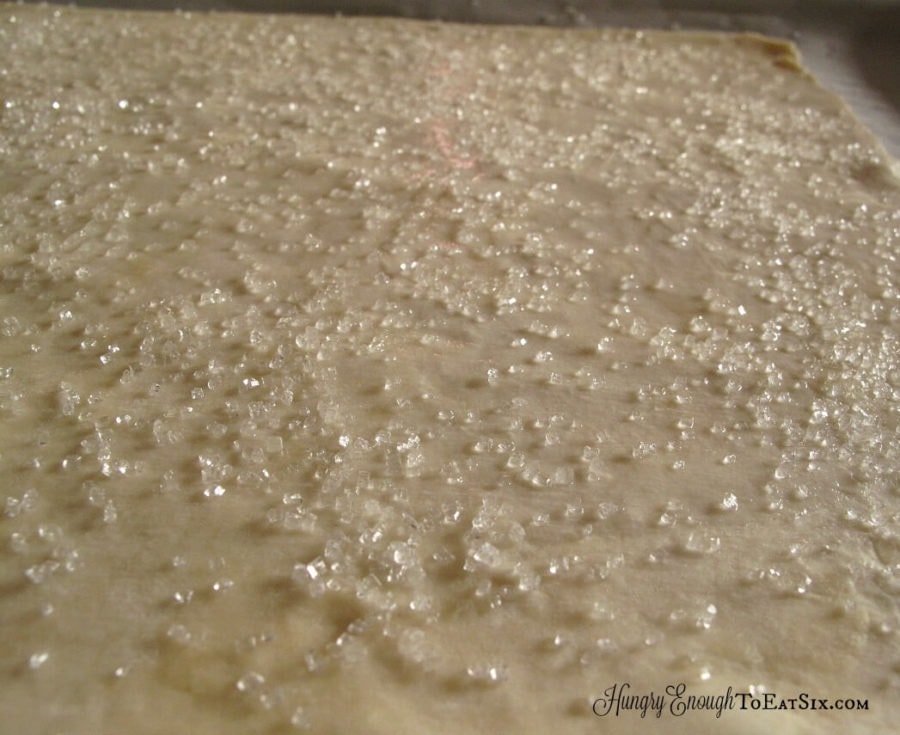 The idea I had in my brain, for crisp and light pastry layered with sweetened apples, apple bread and whipped cream panned out well in reality, which is always deeply satisfying! 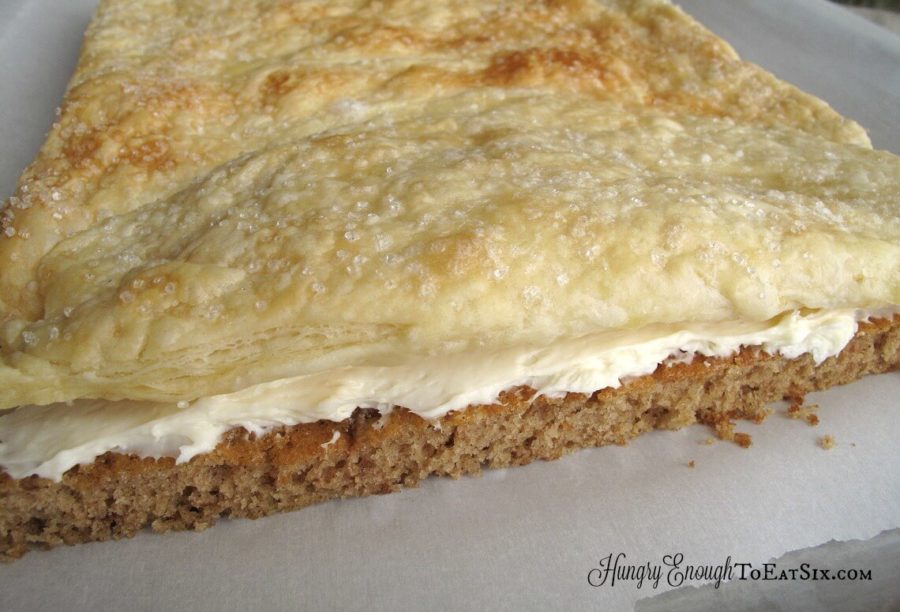 In this challenge though, I say the victory goes to Kari. 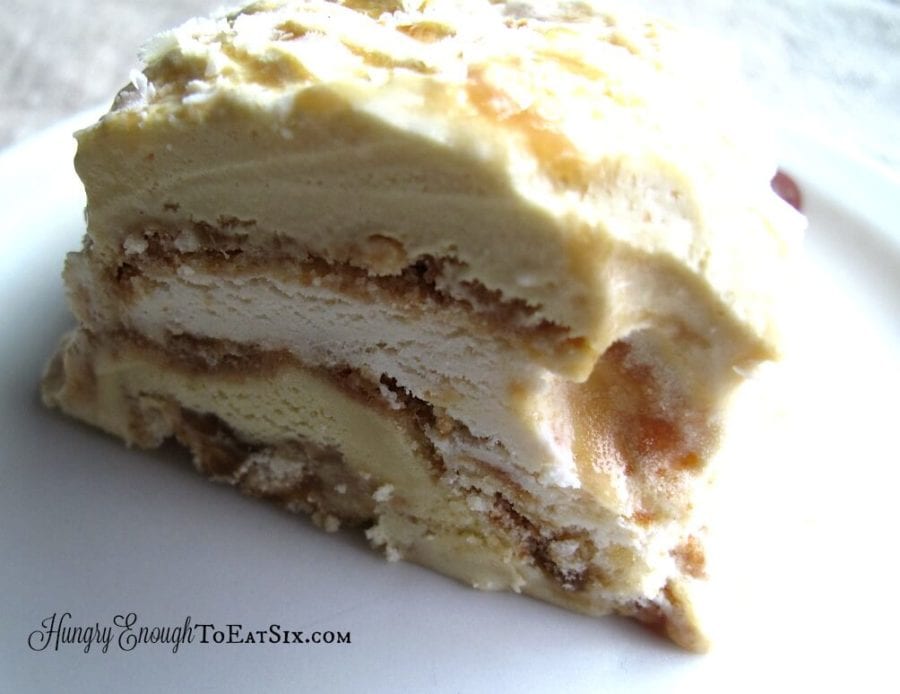 Hers was the best ice cream concoction I've ever had and a most memorable dessert!

This Cook-Off topped all others and we had a delectable, satisfying evening of incredible skillfully prepared food. We are in talks for the next competition. Apps? Hot drinks? Stay tuned!

And in the meantime, links for the lasagna recipes are below: