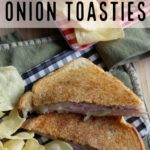 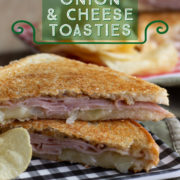 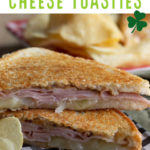 A delicious, melty sandwich that's perfect for a snack or late-night noshing! This Ham, Onion, and Cheese Toasties recipe was inspired by a pub lunch in Limerick, Ireland. A Delectable Destination.

After a day visiting Dingle we had dinner in Castlemaine and the next day set out to visit the city of Limerick. Our lunch in Limerick inspired my recipe for Irish Ham, Cheese, and Onion Toasties!

The recipe is first, then find stories of this leg of our Ireland journey, in Castlemaine and Limerick, right after the recipe.

Toasties, and why you'll love them

We loved our ham, onion, and cheese toasties in Ireland. Once home and researching toasties, I found this funny and very helpful article from The Guardian.com on what a toastie is and what it is not. In short, a toastie is meant to be simple and humble, a mid-afternoon or late-night snack, a lazy Saturday lunch, or (quite popularly) a post-hangover meal.

It's made of basic white bread, sometimes buttered on the outside, sometimes not with fillings that are not gourmet, and that won't squish or leak out. The sandwich is compressed and grilled to fuse everything together.

🔪 How to make Irish Ham, Onion, and Cheese Toasties

Butter the bread, then spread the other sides with mustard. Add Cheddar, ham, and sautéed onion. (And beans too if you'd like!) Put the sandwiches together.

Step 3: Slice and serve them

Slice the toasties in half and serve them hot, with a side of Taytos Chips if you have them!

The Toastie recipe is below. Here are more posts about our trip to Ireland, and the recipes it inspired:

Nancy Mock
This toastie is a delicious and melty sandwich that is perfect for a midday snack, lunch, or late night noshing! The filling in this toastie is ham, Cheddar and onion.
4.67 from 3 votes. Tap stars to vote
Print it! Pin This Recipe
Prep Time 12 mins
Cook Time 5 mins
Total Time 17 mins
Course Lunch, sandwiches, Snack
Servings 2 servings

Travels in Ireland: Dinner in Castlemaine

When we returned from the Slea Head drive in Dingle to our room at Murphy's Farmhouse in Castlemaine (Caisleán na Mainge,) it was time to grab dinner. Fortunately for us, there were two restaurants within walking distance, and we decided to go to The Anvil Bar & Restaurant right down the lane.

This area was a fairly quiet and rural one, and the folks eating and drinking at The Anvil seemed to be mostly locals. Inside we found a booth by the front window where we could settle in and enjoy the friendly atmosphere.

Instead of having a pint my sister and I decided to try some Irish whiskey. There was a helpful guide in the menu to point us towards the best whiskey for the uninitiated.

We decided to try a local single malt, from the Dingle Whiskey Distillery.

On its own, it was smooth and very clean tasting. With a little ginger ale, it was quite pleasant indeed—a nice way to unwind from the day.

We enjoyed it so much that we debated stealing the glasses etched with the Dingle Distillery logo. But our morals got the better of us, and we decided just to ask to buy some. Our waitress told us that our two Dingle glasses were the only ones the bar owned!

We began with grilled goat's cheese crostini and the star of that appetizer was the zingy red onion marmalade that came with it.

Mom tried hake for the first time, a locally-caught whitefish that John, our driver in Inishmore had told us was in season at that time of the year. It came battered like a traditional fish 'n chips platter, and she really liked it.

My sister and I had the "Truly Irish Roast of the Day" which our waitress warned us would be the size of a big Christmas dinner. And she was right: thickly carved slices of roast turkey and ham alongside steamed veggies, mashed potatoes, and a lake of dark, rich gravy.

We feasted on the massive entrees while watching on the bar television snippets of the Rose of Tralee Pageant. Young women from Ireland and abroad (12 from the U.S.) compete to be the next Rose of Tralee, judged on beauty, personality, ambitions, and social responsibility.

On our last morning at the lovely Murphy's Farmhouse, I decided to skip the enormous Irish breakfast and had Cheddar on toast, which is just as simple as it sounds yet was so rich, gooey, and delicious.

We talked with the owner Mary about our Irish heritage and family names (Riley, Reilly, Fennessey, Lavin, Haren), and then about our plans to head to Limerick for the day. She told us that as a child she knew a family from Limerick with the surname Lavin.

We had two goals for our day in Limerick (Luimneach:) to buy hurleys (the sticks used in the game of hurling) for our sons, and for my sister to get a tattoo. She had achieved everything on her Ireland bucket list (try Irish whiskey, have a pint in a pub, get a selfie with a sheep) and the tattoo was all that remained.

She'd been keeping her eye out for a tattoo place as we traveled, but we hadn't come across any. (I'm sure there were plenty in Dublin but not in the tiny area we explored!) When she checked online in Limerick, she found one: Chapel Street Custom Tattoos.

In contrast to the area of Dublin that we had explored, Limerick felt very urban. The majority of the people we saw were residents—heading to work, taking lunch, and pushing babies in strollers.

As we walked we saw lots of bakeries and cafés, several butcher shops with beautifully lavish displays of meats and fish, with the butchers all in striped aprons and bowler hats. One of these butchers gave us directions to a local tea shop where we bought some Irish teas to take back home.

We also figured Limerick would be a perfect place to pick up the hurleys, as they had just won the All Ireland Championship that week, their first championship win in 45 years.

There were still green and white flags hanging in shops and strung across the streets in celebration of the All Ireland win, and we heard from a few shop owners that it had been quite the party when the team came home with the trophy.

We found our hurleys and sliotars in a local sporting goods shop. The young man who helped us looked just like Colin Hanks!

What the heck is hurling?

Hurling is the national sport of Ireland and variations have been played there for thousands of years. The matches are played on a field longer than a football field, and players run and collide the length of it endlessly while trying to score.

The sticks (hurleys) are similar to field hockey sticks but with a flared end tapered like a blade. With that stick, you can hit the sliotar (a small ball) on the ground or in the air. You can bounce the sliotar on the end of that stick—while running! You can hit it with your hand. You can hit other players with that stick... or with your fist. (Well, at least in the video I watched they did.) It is really wild.

While watching the videos I wondered if hurling had been, in part at least the inspiration for the game of Quidditch in the world of Harry Potter. The sliotar in hurling is about the size of the Golden Snitch, and like Quidditch, the sport has its brutal moments!

My sister found the Chapel Street shop and made plans with the owner to return in a short time for her tattoo. Right across the street was Charlie Chaplin's Pub and we headed in to find some lunch. As it was pretty early in the day and the bar had just opened, the only food they had to offer us were toasties.

This was not the first time we had seen toasties on menus during the week. When I had asked at one restaurant if a toastie was just a grilled cheese sandwich, a waitress told me that it was but that you "could put anything inside it."

At Charlie Chaplin's Pub, the toasties consisted of ham, onion, and cheese and were served with Tayto Cheese & Onion chips (which mom fell in love with! Seriously, she ordered a case of them once we got back home!)

The toastie was pressed in a panini press (but with flat plates, so there were no ridges on our sandwiches.) The cheese was melty, the bread toasty and buttery, and the whole thing really hit the spot!

While my sister got inked, my mom and I did some more wandering. We stopped in a café for tea and Americano, brown bread with butter, and a decadent tiffin which is a sweet bar of digestive biscuits (like Graham crackers) crushed and suspended in chocolate. We found a yarn shop for mom to explore, and a second-hand store where I bought a 45 of the song "Only You" by Yazoo.

And a short time after we left her, my sister was done. Her tattoo has her sons' names (my nephews) written in ancient Ogham. Made of lines and crosshatches, it was the first language of Ireland.

With that our Limerick day was done, and we were off to our final B&B of the trip: the Dunaree B&B in Bunratty.