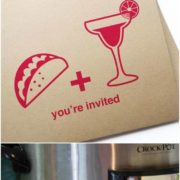 The only downside to this year’s summertime cook-off is that the weather did not cooperate. The thunderstorms were predicted days in advance, so of course, I had plenty of time to worry. Instead of tacos and margaritas poolside, our 20+ guests ended up huddled in our tiny kitchen and living room while it poured outside.

Though this did not create the best conditions for photography, as far as the gathering and the eating was concerned no one seemed to mind! Our counters, tables, and stovetop overflowed with taco creations, dips, chips, salsas, and tortillas. The drinks were sheltered on our deck under the awning, traditional Mexican music streamed from the radio, and people were eager to dig in.

For this cook-off was we decided to make it non-competitive... as exemplified by those friendly peace-and-love faces above! So technically this was not a cook-off at all, but we kept the name because we all love it!

My husband and I hoped to make this gathering a chance for everyone to sample and enjoy as many entries as they could without worrying about tracking dishes or tallying votes. Skipping that step definitely gave us more time to eat, and to focus our attention on eating and more eating!

This taco cook-off was especially especial because my husband created a taco entry! Our family had just returned from our trip to Old San Juan, Puerto Rico where we had incredible tacos, and one of the tacos my husband really enjoyed at La Güerita Taqueria was filled with chorizo.

It inspired my husband to pick up chorizo and potatoes to create his first-ever entry. The recipe he used is from Splendid Table: tacos filled with cubed, cooked potato and spicy, diced chorizo cooked with onions and chilies. They were delicious! The dish was one of the most popular ones there and brought back memories of our meals in Puerto Rico.

I opted for a quick approach for my taco entry and made a filling using a favorite dinnertime recipe: Mississippi Roast in the crockpot.

Once the meat was cooked, I shredded it, crisped it up under the broiler, and then served it in grilled corn tortillas with pepperoncini and a homemade crema sauce.

Other tasty taco entries included "Hair Of The Dog" Chicken Tinga from Beth, complete with this awesome illustration! She began with the recipe from SeriousEats.com, then made the filling her own with generous dashes of honey, molasses, hot sauce, and tequila. She added homemade pickled onions and lime wedges to garnish the Tinga.

Paul and his son Sam brought "9-Year-Old Tacos". The tacos were not, in fact, nine years old, but their creator Sam was! His tacos included seasoned beef and homemade salsa.

Chris made two kinds of seasoned steak for his tacos: Southwest and Taco, and included cilantro, lime, and chunks of avocado to top them.

He also made a big batch of my favorite sauce, "The Bad Hombre" Carrot Habanero Hot Sauce, a recipe from the Vermont Farm Table Cookbook by Tracey Medeiros.

Rob made a Tacos Al Pastor recipe that we loved, as it was one of our favorite taco fillings from our Puerto Rico trip.

He cunningly teased us with this Instagram photo days before the cook-off! There was also a pulled pork taco filling from Audrey and Dan, which included homemade flour tortillas, cabbage, feta cheese, and radishes.

There were several fresh dips on hand including salsas and guacamoles, and Hillary brought us the coveted creamy jalapeño dip. We fell in love with this dip at the first Taco Cook-Off. To round out the feast, Eli and Kari brought a decadent sweet taco dish: Sopapilla Dessert Tacos, a recipe from Pillsbury.com.

My daughter’s boyfriend scored major points with me by making a margarita recipe from Hungry Enough To Eat Six: the Lemon Drop Margarita! He crafted this cocktail perfectly, and it was a refreshing margarita indeed.

There were also plenty of Mexican beers on hand. (I accidentally created a delightful drink that was not a margarita, but was still quite tasty: a splash of tequila plus agave syrup, then topped with a can of Blueberry Lemonade seltzer from Polar!)

And at the end, sunshine

To our delight the rain actually tapered off a few hours into our gathering, and the sun finally shined on our cook-off.

Having feasted and thoroughly stuffed ourselves, it felt wonderful to spread out into the yard, jump into the pool, and settle into lawn chairs with cool drinks.

This year's Taco & Margarita Cook-Off really set the bar high not only for future taco competitions but for all cook-offs, in terms of number of entries and creativity of dishes!

(And I am definitely expecting my husband to continue contributing tasty entries!)

Here are more of our famous cook-offs!

Tacos & Margarita Cook-Off — Hungry Enough To Eat Six
Our friends brought their best tacos and margaritas game (and their appetites) to this tasty, summertime cook-off!
Take me there 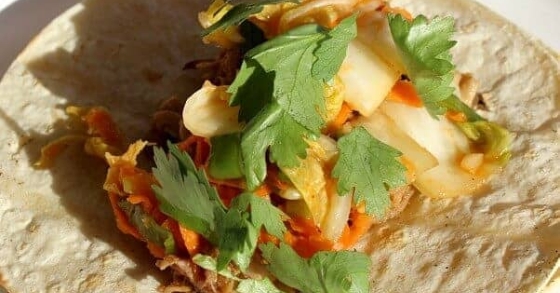 Pie Recipe Challenge for Pi Day! — Hungry Enough To Eat Six
Pie Challenge, one of our beloved cook-off gettogethers! See the big winners, then check out pie recipes that are perfect to make for Pi Day!
Take me there