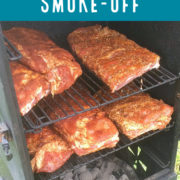 The Summertime Brisket & Ribs Smoke-Off! Yet another in a delicious series of friendly cook-offs among food-loving friends.

Thus far, "the meatier the better" seems to be the theme that we embrace for these cook-offs. Our first was the meatball showdown where I offered Sausage Meatballs with Country-Style Cream Gravy and Spicy Meatball Bites. A few months later we had our chili cook-off - my chili featured pork ribs, dark beer, and lots of char! Then in early springtime, we had our stuffed meat cook-off, and my contribution was a Beef Roulade Stuffed with Stuffed Jalapeños.

This cook-off, tailor-made for a gorgeous summer weekend pitted smoker against smoker and brisket against ribs. Me against Schmid.

My choice for the smoke-off was a big, beefy beef brisket. I turned to the Bobby Flay recipe for "Texas Style Brisket" for the spice rub. I picked up big chunks of hickory wood to add some extra flavor to the meat.

The star ingredient of this rub was the ancho chili pepper. Flay's recipe called for ancho chili powder, but my smoking partner and advisor Charles wisely pointed out that fresh, whole anchos would give the rub a superior flavor. And he delivered them to my door just in time to grind and add to the marinating meat!

Schmid's pork ribs were thickly covered with a Kansas City Style spice rub and they had their own beautiful, chili powder-tinged hue!

I am often the victim of my poor planning, and this event was no exception. I agreed that our arrival time for our Saturday party would be noon, and planned that folks would be eating by 1:00 pm. I knew from reading recipes casually here and there that brisket would take many hours to smoke, and I envisioned myself starting around 6:00 am.

When I did some real research at the last minute on Friday I calculated that my eight-pound brisket would need about 1-½ hours of smoke time per pound. Twelve hours!

2:30 am to be precise. It should have been even earlier, but that was the earliest I could muster (Christian was already laughing at me as I went to sleep in our daughter's bedroom, banished so that I would not wake anyone else at 2:30 am.)

Surprisingly I learned that 2:30 am is really a very peaceful time to be up. At that hour our backyard was cool and quiet, the house dark and silent next to me with sleeping husband and child inside. Our two cats stalked around my feet in the grass wondering why I was up but not feeding them. With a headlamp on (nervously scanning the yard for wildlife critters that might be out to get me,) flashlight, and matches in hand I got the smoker ablaze.

I had a precision plan from Derald Schultz, Sales Manager at Primo Grills. He graciously talked with me by phone a few days before the smoke-off, taking me through all the steps to properly set up and heat the ceramic smoker. I felt confident and raring to go! After the coals had ignited and started heating it was crucial that I watch for the temperature to reach 250° and then quickly take steps to keep it there.

Unfortunately, I ran into the house for ten minutes... to nap or something.

When I came back out I had missed that window: the temperature had shot up to 700°! It took two hours to bring that temperature back down (the downside to how well ceramic smokers hold in heat) by repeated venting and spritzing the inside with water. When the brisket finally got in it was 4:00 am. And I went back to bed.

I was up again at 6:30 am to baste/spritz the brisket with apple juice. At 7:00 I heard the front doorknob of our house being jiggled and found that Schmid had arrived with his smoker and ribs.

From there Schmid and I had a pleasant morning sitting in the backyard with Christian. The morning hours were filled with lots of coffee, breakfast sandwiches from our local diner The Guilty Plate (graciously procured by Christian,) basting, turning, and beer.

At 9:30 I wrapped the brisket in foil, a Bobby Flay recommendation to help keep the meat moist. And it was around that time that these two competitors switched from competing to collaborating.

We helped each other with the smokers, with the spritzing, and the timing. Schmid talked me through my panic attack when I misread the meat thermometer and thought my brisket was lost. And I talked him through hot coal challenges that threatened his ribs, charred my backyard, and blackened my oven mitt.

My brisket actually finished hours ahead of schedule and came off the smoker after only 7-½ hours of smoking! Schmid's ribs were off and resting by that time too, and the party was in full swing.

To go with the smoked meat Schmid and I both labored over separate pans of barbecue sauce on the grill. Both sauces had endless tweaking as they cooked.

Schmid's featured mustard, molasses, and chopped onion. Mine was inspired by a recipe from Sandra Lee and had diced garlic, hot sauce, and brown sugar.

Both meats were exquisite, a smoke ring visible on both the brisket and the ribs.

They were succulent and juicy, and we mixed and matched meats with sauces.

Our food-loving fans were impressed. My smoking partner and adviser Charles was impressed. There was much high-fiving.

So much delicious food

Though the party was set around smoked meat our long table under the awning was filled with amazing sides, salads, and desserts, provided by all of our friends: Hillary's homemade macaroni and cheese topped with fresh tomato slices, Rebecca's secret family recipe baked beans and her salt potatoes with melted butter.

Hillary brought chocolate cupcakes (for Kari's birthday!) with Rolos baked inside, and there were chocolate cream and raspberry pies brought by Andrew and Lisa from Poorhouse Pies and Red Door Bakery, Kelly's Asian slaw, Rob's grilled baguette slices with cheese. And it wouldn't be a party without tons of chips, and cheese dogs for the kids.

There was plenty of eating and drinking to be sure, but also swimming, corn hole, eating blueberries off the bushes, chasing babies.

It was one of the best parties we've ever had here. It's the cook-off to beat as we already begin planning our next match of culinary prowess!

The recipe that guided my brisket is from Bobby Flay and can be found here. My bbq sauce was inspired by this recipe by Sandra Lee!

Do you have a smoker? What meats or veggies or what else do you like to smoke? Leave a comment below!