Our house was the location of a 2nd great cook-off. The first was the Mansfield Meatball Classic back in November. Just before Christmas we hosted The Chili Off, where participants were instructed to "Make the best damn chili you know how!"

Sixteen friends gathered with their children in tow to taste and judge six amazing home-cooked chilis.

There was also plenty of fresh-baked cornbread, Mexican beer, and also the fixings for Bitter Devil cocktails (that one in particular got the most votes for official Chili Off cocktail.) 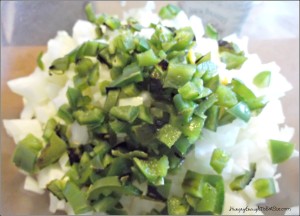 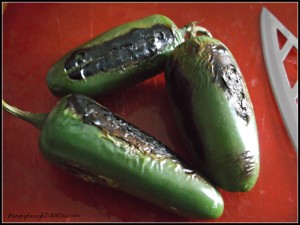 The morning started early (especially for a Saturday) but I was already feeling the pressure. Chris Schmid, who joined forces with Rob Melasky to form Team Schmid-Melasky had started their chili prep the night before. Saturday morning the taunting pics came over via text, attempting to intimidate - and it worked!

I was beginning to worry that I had seriously underestimated the time required to produce a really good chili. 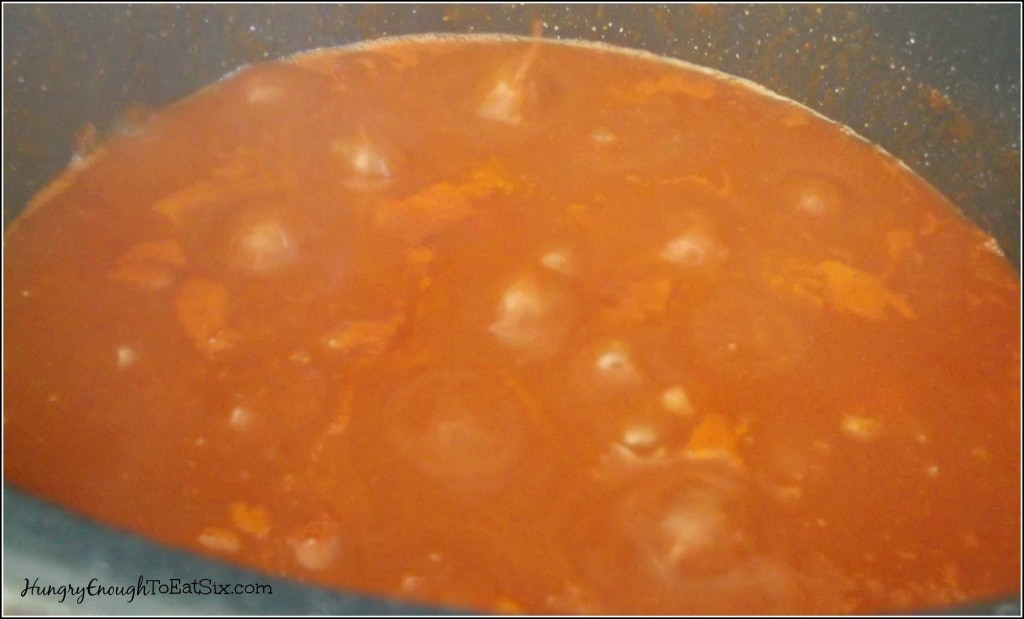 I don't have a lot of experience making chili. It's a dish that I make perhaps once a year. To prepare I pored over several recipes in books and online, studying various bases, seasoning blends, cooking methods, and meat philosophies. In the end my mind was a chili-tinted blur, and I ultimately pulled ingredient inspiration from multiple sources.  I was creating my Frankenstein's monster of chili.

A recipe at Bon Appétit for Black Bean Chili with Crispy Pork gave me the idea of using pork in my chili instead of beef. Motivated by price more than anything else I chose some country-style pork ribs, and researched the best ways to braise and sear that cut. I decided to have a smoky, dark stout as part of the base after reading another Bon Appétit recipe for Beef and Dark Beer Chili. 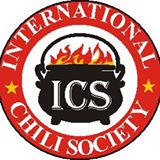 Further inspiration came from the ICS: The International Chili Society which is the largest food contest/festival organization in the world. The ICS organizes several chili and salsa cook-offs every year and all events benefit several charities. The handy element of their website is that they list winners going back several years as well as the chili recipes. I zeroed in on the 2013 winning chili recipe from Bob Plager, who was the first in ICS history to win the World's Championship Chili Cook-off two years in a row. His 2013 chili is called Pools Brew Chili.

Two things struck me about Plager's recipe. The first is that he uses pitted prunes in the cooking liquid with the meat, for sweetness and to enhance the appearance. An interesting idea, but I decided against it as I didn't want to add additional sweetness to my chili. The second thing that struck me was that Plager has three rounds of seasoning for his chili: the first gets added when the liquids and meat are initially combined, the second round gets added over two hours later, and the third round goes in fifteen minutes before the chili is due to be judged.

I loved this idea, imagining that it would make for a really flavorful and spicy final product, so I did these seasoning rounds with my chili too. 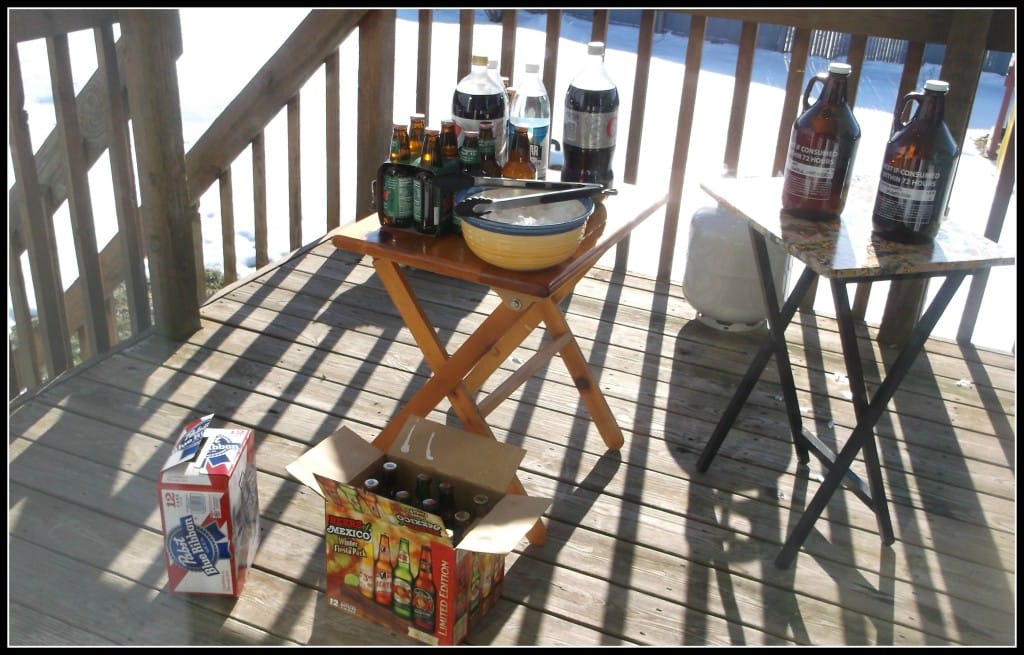 Competition day: a cold, stark December afternoon, but with bright sunshine glinting off the frosted deck. It was a good day for six crock pots full of hot chili. The deep-freeze outside was the perfect place to store all the beer, ginger beer, Jim Beam and sodas. 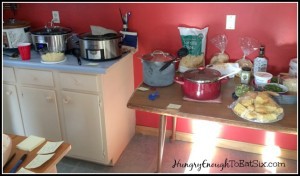 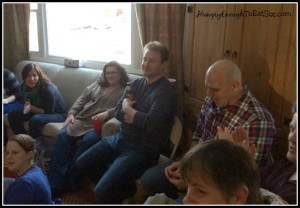 Just around noon the chilis - I mean our friends, began to arrive. In short time our tiny house was filled to bursting. The older kids scampered downstairs for Wii games, and adults sat shoulder to shoulder around the living room and to block the toddlers from the stairs. The table in the kitchen was brimming with searing-hot crocks, bowls of toppings, pans of cornbread. 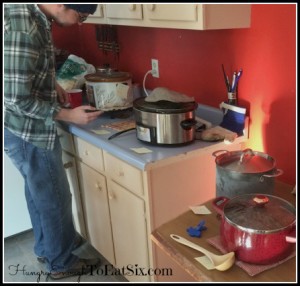 Chili chefs nervously milled about the kitchen adjusting the temperatures on the slow cookers and testing the seasoning. Charles of Team Charles had his chili in a beautiful, weighty, cast iron pot, that he tended at the stove top. 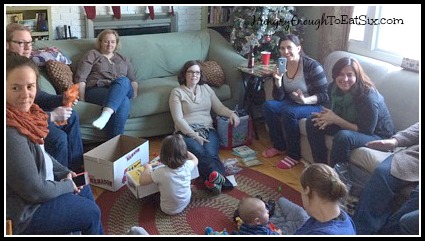 The start was delayed repeatedly for chefs to make final alterations. A full hour past the scheduled judging time the crowd could wait no more, and the chefs were asked to leave the kitchen. 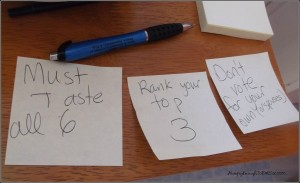 Two baskets were set up on the island in the middle of the kitchen with scraps of paper and pens. The guests then moved through the kitchen taking tiny samples of each chili in their bowls. Very shrewdly (but much to the anxiety of the chefs!) the taste-testers took their time savoring and pondering each chili, discussing them with one other. One factor adding difficulty to the vote was that the chilis were so different from each other. Here is a quick overview of the competing dishes:

Team 1 - Lisa: a red sauce base with large meaty chunks of pork and beef, deglazed with beer. Salsa and corn chips were also added to the sauce.

Team 4 - Me!: A red sauce base with pork ribs, dark beer, corn and lots of seasoning.

Team 6 - Dan: A white sauce base made with chicken, bacon and - surprise ingredient, maple syrup! It had a sweet, lightly seasoned flavor and a broth consistency. 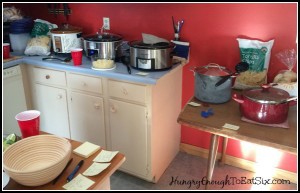 The guests made way for the chefs to come in, have their tastes, and cast their ballots in a separate vote dubbed the "Chef's Choice."

The wait time for the votes to be cast seemed agonizing enough, but then came the tabulations of the votes by Christian and Paul. Using extremely high-level computations and algorithms, they counted, checked, and rechecked, discussed, drank beer and discussed some more. Fortunately there were no hanging chads on our ballots, otherwise we might have been waiting for days. The audience in the next room grew restless, and chefs began to pace the floor.

Finally the long-awaited announcement was made.

First the Chef's Choice Winner was named. And what do you know, it was yours truly!

Then the big one: Winner of the Popular Vote, Champion of the First Ever Chili-Off:

The rich combination of peppered bacon, sweet sausage, hot sausage, roasted peppers and puréed corn to thicken and add heft to the sauce was the crowd favorite. The variety of beans and bean puree added extra body and flavor, giving the chili a wonderful mouth-feel. (There, Christian are you happy? I used your favorite food descriptor.)

The prestigious trophy was awarded, team Schmid-Melasky basked in the glow of their chili victory. 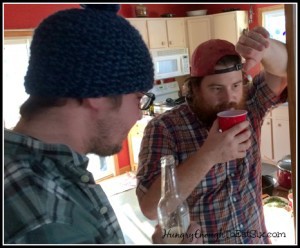 This was by far our best food competition yet, and we're in negotiations now for the next. There have been suggestions of mac n' cheese, lasagna, desserts, or ingredient-based cook-offs. Where will our love of food, competition and sheer over-indulgence take us next? 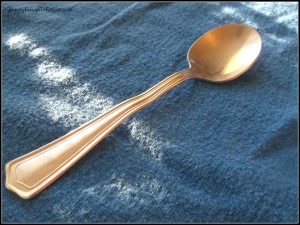 Chili Breakdown: Not all ingredients, secrets or recipes were revealed to me but here are some of the components of the amazing chilis we sampled that day!