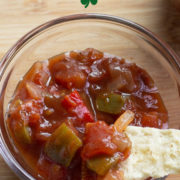 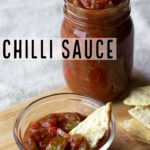 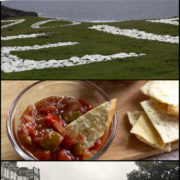 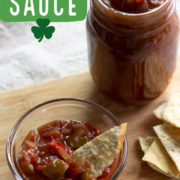 This sweet-savory homemade Chilli Sauce, my great-great-aunt's recipe, is delicious on burgers and sandwiches. We found chilli sauce on several menus during our trip to Ireland.

This trip took me to what was one of my most exciting Delectable Destinations. (The bar was set pretty high after our family's impulsive jaunt to Old San Juan, Puerto Rico.)

I traveled with my mother and sister to Ireland, where we started our trip in the northwestern region of Donegal and then visited Ballyshannon, birthplace of a famous '70s Irish rock guitarist. That's where we found Chilli Sauce.

The recipe is first—then find stories of this leg of our Ireland journey, in Donegal and Ballyshannon, right after the recipe.

Our family recipe for homemade Irish Chilli Sauce is full of tomatoes, peppers, sugar, and spice.

It's simmered slowly to create a thick sweet-savory sauce. It's really delicious on burgers, grilled meats, and veggies. Or, try it the way we had it in Ballyshannon: tossed with cooked, shredded chicken.

🔪 How to make homemade Chilli Sauce

Slice an X in the bottoms of the tomatoes and drop them into boiling water for a minute. Fish them out and when they're cool, remove the peels.

Slice the peeled tomatoes along with the peppers and onions. Place these in a stock pot with the sugar, vinegar, and spices.

Stir and simmer the sauce for about an hour. You can let the finished sauce cool to store it in the fridge or preserve the sauce using a hot water bath method.

The Chilli Sauce recipe is below! Here are more stories of our Ireland trip and the recipes it inspired:

💬 Have you tried this Chilli Sauce? Please click the stars at the top of the recipe to rate it and leave a comment for me below! 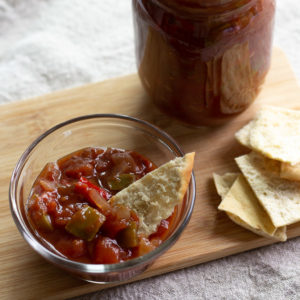 Deciding on the trip dates was easy, but deciding where to go in Ireland was much more difficult. There are so many sites and towns we wanted to see, and it felt impossible to narrow down where to go in just one week's time!

Little by little, with help from Rick Steves and Lonely Planet travel guides we honed in on places to visit, and my mother scouted out sweet little B&Bs where we could stay.

We chose a route that would begin at the airport in Shannon, and then meander mostly through the north and west of Ireland, plus one quick dash over to Dublin on the east coast. And the first town on the agenda was Donegal. (Dún na nGall)

We arrived at Shannon airport so excited to begin — and a little punchy too, despite our best efforts to sleep on the flight. The Hertz rental car representative (who looked like actor Simon Pegg!) took great pleasure in teasing my mother, who mistakenly rented a stick shift instead of an automatic. (Drive a stick while on the wrong side of the road and the wrong side of the car? Yeah, no thanks.)

To our relief, the Simon Pegg doppelgänger found a car we could manage, and also made us laugh with an exaggerated, "Jesus, Mary, and Joseph!" Armed with cups of airport coffee and tea, we got on our way to our B&B in Donegal.

My mother drew the short stick and was the first to try out driving on the wrong side of the road. My sister got the nail-biting role of navigator. (Faux Simon Pegg would only allow two names on the rental agreement: mine and Mom's. I wanted to cheat and let my sister drive too, but someone said we'd get into trouble.)

The trickiest part was staying off the shoulder (on the left side there) and out of the shrubbery, rocks, etc. very close to the shoulder. As the navigator, my poor sister saw that treacherous shoulder looming towards her quite often.

The drive there was long and rainy. The landscape I could see through the rain-streaked windows was very green, ranged from flat to somewhat hilly, and was dotted with sheep and brown cows.

A few hours along we stopped for a bite in the small town of Charlestown and found The Market Café, a little eatery with a homey decor of flowered tablecloths, hutches and china. and it was here that we had our first Irish breakfast: traditionally this includes rashers, sausages, black pudding, white pudding, eggs, toast, and fried tomatoes. My sister's plate had fries instead of tomatoes.

The puddings were so interesting: two semi-circular, fried-up slices. They're made from pork and offal along with flour or oats, spices, and in the black pudding, pig's blood. I found that the white pudding tasted much like a regular breakfast sausage. The black pudding had a much stronger and distinct flavor, one that reminded me of our grandmother's old-fashioned Thanksgiving dressing made with turkey giblets.

I was nervous to try them... and surprised to find I liked them! My lunch was a more familiar panini with ham, pineapple, and Ballymaloe relish.

We finally reached Rossmore Manor in Donegal a few hours later, after winding through a narrow lane that sat low between lush fields with grazing horses and sheep.

Perched at the top of a steep drive, Rossmore Manor is a lovely stone home designed to look like a small castle, complete with coats of arms, arched entryways, and heavy, wood doors.

The view from the drive was stunning: a sweeping view of verdant, cow-covered hills sloping down to the inlet where the River Eske empties into Donegal Bay.

What a beautiful view the owners of Rossmore wake up to every day!

In Donegal Town that night we had dinner at The Harbour Restaurant. We were greeted by a crackling fire in the fireplace as we came in out of the windy, damp air.

It was there at our table that we heard our first "Not a bother!" This was our waitress's smiling answer to everything we asked for and after each of our thank-yous!

"Not a bother"—such a welcoming and friendly reply. What a wonderful world it would be to always hear and reassure others with it. Though we would occasionally hear this at other stops on our trip, to us it was really a Donegal-ism.

My sister had the Harbour's traditional Fish and Chips (served with mushy peas) and mom had the Oven-Baked Cod.

I had a really interesting and delicious entree: a Mille Feuille made with layers of flaky pastry, toasted goat's cheese, pesto, and Mediterranean veggies. The layers of goat's cheese were generous in size and melty: a nice balance with the pesto and airy pastry.

After dinner, we wandered the streets and visited shops. As dusk fell, we saw a sign for the ruins of the 15th-century Donegal Abbey and graveyard. Sounded interesting!

As we entered the graveyard to have a look, I noticed two girls (15, maybe 16 years old) in miniskirts and puffy, cool-weather jackets. One of them was leaning against the other to buckle the straps of her tall, clear-plastic, wedge sandals. And I thought, "Well, that's weird."

It was then I realized that the graveyard was filled not with tourists but with teens. Girls dressed to the nines and shivering in the cold drizzle. Boys with beers in hand and smashing emptys against the crumbling walls.

We had walked into a party... at the ruins of a 500-year-old friary and graveyard. The kids eyed us leerily, and we decided to sight-see another time.

The next day we had a lovely breakfast of sausages and café Americano. We also had our first taste of Irish brown bread there: a rustic soda bread so different from the white Irish soda bread we were familiar with. It was delicious with butter and tea!

I shared with Rossmore owner Vicky our plans to take a long drive north to Fanad Lighthouse and then drive south to Galway. She frowned and replied with a worried, "Oh no, no, no, no, no." Her husband said, "Oh that's mad." (I loved it.)

Our mistake was that we took literally the appearance that all points in Ireland are at most three hours away from each other. By week's end, we learned that this estimate doesn't account for weather, traffic, our driving abilities, or sheep in the road.

Thankfully Vicky and her husband convinced us to drive to the nearby lighthouse on St. John's Point instead. Such a wise suggestion.

It was my turn to drive, and I confess I was really terrified. To my surprise, it was not hard to get used to. My navigator-sister would probably disagree, as she had a few tense moments while I drove. Despite my best efforts, that shoulder loomed close to her own shoulder several times. Overall I think I did okay though!

The narrow drive wound down the point, taking us to the seacoast and lighthouse.

The views there were just gorgeous: windy, green cliffs and the blue-gray sea all around, sending pounding waves to the rocky shore.

On one cliff we discovered the word EIRE (Ireland) spelled out in white stones.

Saint John's Point was one of several lookouts along the coast manned by a volunteer Coast Watching Service that worked with the Irish Defense Forces during WWII. This "EIRE" marker and dozens of others around the coast were added to guide American pilots, and many of these EIRE markers are still visible today. (They're listed here.)

Along the point, we came upon a real gem: a tiny thatched cottage where we met Cyndi Graham. She weaves wool there on an enormous loom that takes up most of the small space, creating scarves, cloaks, hats, and other apparel.

She shared that her family has lived on the point for several generations. Her husband and father help her re-thatch the roof of the cottage every few years.

I bet little has changed on the point in all those generations, except maybe the number of people driving out to see it all.

We left the point to make our way south and stopped for a break in the town of Ballyshannon. Incorporated in 1613, the town bills itself as the oldest in Ireland.

The owner of a small arts cooperative has a lot to share with us about '70s rock musician Rory Gallagher. This Ballyshannon-born guitarist influenced the likes of Brian May, The Rolling Stones, and Eric Clapton.

Ballyshannoners proudly claim Gallagher as their own. A statue of him stands in the center of town.

We had lunch at Kate's Kitchen. There we were delighted to find "chilli sauce" on the menu!

Why? Well, my mother has recipes from her Great Aunt Lizzie Reilly (like traditional Irish Soda Bread), including one for Chilli Sauce. I had always assumed that "chilli" was supposed to be "chili" and had simply been misspelled on the card. But here, and indeed everywhere else we went in Ireland, it was spelled "chilli".

At Kate's Kitchen, the chilli sauce was tossed with shredded chicken and piled onto a bap—a soft, white Irish roll. It was very tasty indeed.

After some tea and Americano, we said goodbye to Ballyshannon to head to our next destination: our B&B in Clifden and a day trip to the fascinating island of Inishmore.