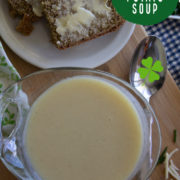 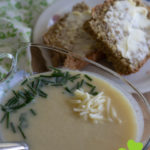 A simple yet flavorful Irish potato soup, just the ticket for a lunch or light dinner. It's a recipe inspired by a soup we had at a small pub in Dublin. A Delectable Destination.

After a day spent on the island of Inishmore, the largest of the Aran Islands, we drove through Galway for dinner and then headed to Dublin.

There we had a lovely lunch of potato soup and brown bread, a meal that inspired this recipe for Irish Potato Soup

The recipe is first, then find stories of this leg of our Ireland journey, through Galway and Dublin right after the recipe.

Why you'll love this hearty soup

Once home from Ireland I created my own version of a traditional Irish Potato Soup. It's a simple recipe made extra flavorful with onion, garlic, and cream. It's pureed to a silky finish.

Potato Soup is delicious with a Corned Beef and Cabbage Slaw Sandwich, which I like on a potato roll, but if you can find a soft wheat (wheaten) roll then you can make them even more authentic!

Speaking of potatoes, have you ever tried Syracuse Salt Potatoes? They're so delicious!

🔪 How to make this Irish Potato Soup recipe

Peel and slice the potatoes, and hold them aside in a pan of cold water. Dice the onion and garlic.

Step 2: Saute the onions and garlic

Cook the diced onions and garlic for about 5 minutes until they're translucent and fragrant.

Step 3: Add everything to the soup pot

Add stock, garlic, onions, and potatoes to a stock pot along with the seasoning. Bring everything to a boil, then simmer the soup for about 15 minutes until the potatoes are tender.

Use an immersion blender or a regular blender to puree the soup, until it's smooth. Stir in warmed half & half and a little more seasoning. Give it a few more minutes on the burner to warm it through, and it's ready to serve.

What goes well with Potato Soup?

Well, at the Irish pub in Dublin we had corned beef and cabbage sandwiches with our potato soup and that was a very good pairing. The light flavor of this soup is perfect with other deli meat sandwiches, grilled cheese, a good Irish toastie, or simply served with a buttered slice of bread—or Brown Bread.

The recipe for old-fashioned Irish Potato Soup is below. Here are more recipes inspired by my time in Ireland:

💬 What do you think of this Irish Potato Soup? Have you been to Dublin? Leave a comment below. 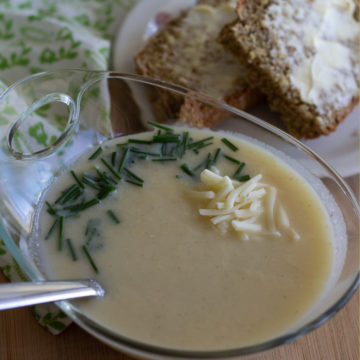 Prepare the potatoes and veggies:

Cook the onions and garlic:

Put everything in the pot:

Travels in Ireland: Dinner in Galway

We boarded the ferry from Inishmore back to Rossaveal, squishing into our seats with our bags of island treasures. For some reason, I decided not to have the store ship my Irish wool sweaters for free. (I have a bad habit of doing illogical things.)

As we sat, I soon realized that the sound system no longer played the '80s music we had heard on the ride over. Instead, it was a sporting event. The announcers were frantic and emotional as they covered the game, quickly throwing in the changing scores for Limerick and Galway teams.

A couple of nights earlier in Donegal, we had seen a news story about the national sport of Ireland: Hurling, "the fastest game on grass." (If you haven't seen a hurling match, watch this clip on YouTube now.)

I later learned that this was the All Ireland Championship, a tournament that Limerick had not won since 1973. Their fans were pumped! Our ferry arrived before the finish, so we were left to wonder if the favored Galway team would take it, or if Limerick would pull in their first win in 45 years.

We faced a long drive to get to our next destination, Dublin. There wasn't enough time for an extended visit to Galway (Gaillimhe) but figured we could at least swing through for dinner. We parked in the Latin Quarter near the Spanish Arch, the remains of a 16th-century wall built along the quay of the River Corrib.

As we walked past this cobblestone-paved public area, there was a strange feeling in the air and in the people, one that felt like... a party had just ended. There was listlessness, and debris blew around all over the ground. We didn't think much of it at the moment (too hungry) and continued onto Quay Street.

Quay Street is a colorful and vibrant walking mall with restaurants crowding both sides of the street, and a crush of people filing through. Musicians and dancers performed here and there. I wished we had had more time to explore this street, but we instead ducked into Martine's Restaurant.

There, my sister and mom enjoyed Irish beef burgers on soft baps (rolls) spread with "sweet mayo". They loved that sweet mayo!

Later research revealed that sweet mayo is just mayonnaise mixed with ketchup — but they insist it's much tastier than that. My dinner was a wonderful and velvety sweet potato coconut soup, as well as a walnut-spinach risotto.

And while we sat eating, we overheard (from a neighboring table or maybe the bar) that Limerick had defeated Galway in the All-Ireland Championship. No wonder the party by the quay had come to a halt!

As we headed back to the car, however, it seemed the party was coming back to life: a huge swarm of teens had ducked into the Spanish Arch. Music blared from somewhere and the kids passed plenty of beers around. A few guys were pissing against a wall. Party on!

A day in Dublin

After spending the night at Glenmore House, we drove into Dublin (Baile Áth Cliath) the next morning. Actually, Gavin the cab driver drove us into Dublin, as I insisted that I would not attempt driving in the city. Every travel guide we consulted had the same warning: "A tip on driving in Dublin: don't."

As Gavin drove, he pointed out sights like the Famine Memorial along the Custom House Quay, and the Samuel Beckett Bridge. He told us about the block of buildings that Google owns in the city (they employ 7,000 people there!)

Gavin also mentioned that U2 owns a building there housing the Clarence Hotel, and remarked, "People think U2 are saving the world, but they also have the best accountants in the world to help them hide money from the Office of Revenue!" Meow, Gavin!

We started on Grafton Street which is full of mostly high-end boutiques and designer-label stores.

Meandering onto side streets we found flower stands, a cheesemonger, and souvenir shops. We spent some time wandering before heading to Trinity College to see the Book of Kells and the Long Room at the Old Library.

(I left a few of my business cards along the way!)

While waiting for our tour time, we had our first pint in an Irish pub — at O'Neill's Pub & Kitchen.

My sister really enjoyed her time spent with a Galway Hooker. (Easy now... it's a pale ale named for a boat!) I had a Rebel Red, which I liked very much indeed.

We got mom to lift a glass too!

The Book of Kells and the Old Library

Back at Trinity, we filed through an informational area about the Book of Kells. The exhibition also held two stone pillars carved with Ogham inscriptions.

Ogham is the earliest written Irish language dating from about the 5th century. On a side note, Vermont has an interesting and mysterious connection to this language. Several small, stone caves with domed roofs exist in Vermont, and some have Ogham inscriptions carved into the stone. There are many competing theories about these caves. Some scientists believe that Celts living in the area built the caves over 2,000 years ago. How intriguing!

We then moved into a shadowy room to view the book itself. The illuminated manuscript, created around 800 A.D., has been at Trinity College since the 1600s. It is a beautifully illustrated piece. It's difficult, in my opinion, to wrap one's head around just how old it is, or how it has survived so incredibly long.

From there we climbed stairs into the Long Room of the Old Library, a breathtaking space stretching out 213 feet with a soaring, vaulted ceiling covering two floors.

Books completely fill the floor-to-ceiling shelves. Marble busts of philosophers and authors line the room. The country's oldest Irish harp, dating to the 15th century is also on display there.

It was dazzling. I took far too many photos and several failed selfies!

After leaving the campus we browsed in the Books Upstairs bookstore and picked up some Irish cookbooks and an Irish-English Dictionary.

Then we strolled to Merrion Square to find Oscar Wilde reclining on a rock—a sculpture that, according to Atlas Obscura, was commissioned by the Guinness Ireland Group and created by artist Danny Osborne.

I loved this column inscribed with quotes from Wilde and topped with a bronze sculpture of his wife Constance.

As we neared the end of our time in Dublin we found our way into Sheehan's Bar, its crimson and black exterior with gold lettering catching our attention from nearby Grafton Street.

Inside the space is cozy and old-fashioned, with dark wood floors and walls, exposed brick, and a low, paneled ceiling. We sat tucked into a corner just off the bar.

There my mother and I had a velvety potato soup served in an enameled tin mug, alongside a corned beef and cabbage sandwich on hearty slices of wheat bread. (Or "wheaten bread" as it's called everywhere in Ireland.)

My sister enjoyed a sandwich of ham, Cheddar, tomato, and onion. It was all so comforting and filling and felt like a truly Irish meal. It was a perfect way to refuel for our long drive to the next destination.

My Ireland posts are dedicated to my mom Kathy and sister Melissa. I loved our time together in Ireland and I love you both!