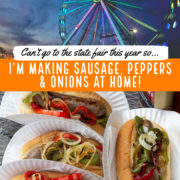 One of our favorite fair foods is really easy to make at home! Make savory State Fair Sausage, Peppers, and Onions on the grill, deliciously loaded into rolls.

My favorite part of going to the fair is the ridiculously indulgent food. Sometimes we just can’t get to the fair because of other plans or a lack of cash. For these times—and any time of the year, really—it’s a perfect opportunity to make our own State Fair Sausage, Peppers, and Onions at home, with bratwurst sausages that are simmered in beer before they hit the grill.

More of my fave fair foods include sugar-dusted pieces of Fried Dough and long ears of Corn on the Cob Drenched In Butter.

Ah, I can picture it now: the smoke and heavenly aroma of grilling meat and veggies wafting through the fairgrounds. It's almost like there are wispy fingers of smoke drawing us closer and closer.

It's a good thing that this particular state fair craving is an easy one to make at home. Just start grilling those sausages and peppers, and you'll soon see your neighbors peeking out the window to find out what smells so delicious!

How long do sausages take to grill?

Because the bratwurst sausages are raw, they must be cooked long enough to reach an internal temperature of 160°F. To help get them to this temperature faster without bursting or burning, I first par-cook the sausages in a little beer bath on the stovetop.

Just five minutes of simmering gives the meat a headstart while keeping them moist, and infuses them with a flavor from the brew. After this, the sausages only need another 5-10 minutes on the grill where they get crispy edges and lovely grill marks.

How long does it take to grill peppers and onions?

Tossed in a little oil, the peppers and onions grill up in 10-15 minutes. I like to spread them out on a baking sheet set right on the grill grates: this way, no veggies fall through the slats and they still get tender with browned edges.

Also known as a sausage dog with peppers and onions, this is a great recipe to pull out for a fun, family barbecue or when friends are coming over. Soft hoagie rolls are filled with savory, juicy sausages, tender rings of peppers, and lightly charred onions. They're a big fair-style hit.

The sausages get a quick cook on the stovetop in a beer bath. Not only does this plump them up and give some extra flavor, but it also makes sure the sausages cook through without burning or bursting on the grill.

🔪 How to make State Fair Sausage, Peppers, and Onions

Bring beer to a simmer in a large saucepan. Add in the sausages and enough water so they're just covered. Simmer the sausages for five minutes, then remove them from the pan.

Step 2: Cut the peppers and onions

While the sausages cook, slice the bell peppers and onions into thin rings.

Heat a gas grill to medium heat. Spread the sliced peppers and onions out on a rimmed baking sheet or sheets of foil set on the grates, and drizzle them with oil. Turn and grill the veggies until they're soft and browning.

Add the sausages to the grill and cook them for 5 to 10 more minutes, to finish cooking them through and give them some color.

Step 4: Load them into rolls

What types of sausage can I use to make sausage, peppers, and onions?

I like to use Switchback bratwurst sausages. Other types that work well are hot or sweet Italian sausages. Precooked sausages can also be used in this recipe, such as kielbasa or smoked sausage. Since these are pre-cooked, you can skip the beer bath and just heat them through on the grill.

What toppings are good on sausage, peppers, and onions?

Everyone likes something different, so I try to put out a variety of toppings to choose from. Ketchup, hot sauce, spicy mustard, and barbecue sauce are all good. Melted cheese is pretty tasty, too. It's even good with no toppings at all!

How do you serve sausage, peppers, and onions?

In my recipe, the sausage is set inside a soft bun with grilled onions and peppers. You can also skip the roll and serve them over cooked rice or over pasta.

What are good side dishes and drinks to serve with sausage, peppers, and onions?

Serve these up with sides of fried potatoes, your favorite summer sides like macaroni salad or potato salad, or buttered corn on the cob.

For drinks, we love to enjoy these with a cold lager or pilsner beer, or non-alcoholic drinks like lemonade and iced tea. Some wines to serve with the sausage are sweet Lambrusco or chilled rosé.

It's about time for some State Fair Sausage, Peppers, and Onions, don't you think? Find the recipe below! And here are more recipes to tempt you as well:

💬 How do you like this taste of the fair at home? Scroll down to leave a star rating on the recipe, and a comment. 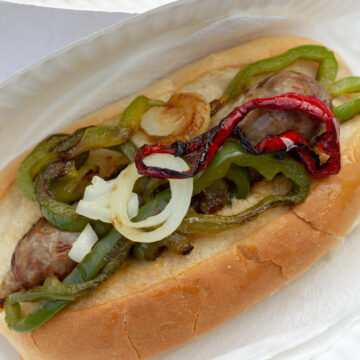 Cook the brats on the stovetop:

Prepare the peppers and onions:

Grill the veggies and brats:

Assemble the sausage, peppers and onions