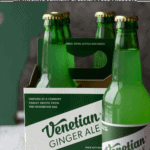 A popular Prohibition-era ginger ale made in Burlington, VT was all but forgotten after ending production over 70 years ago. Now this spicy ginger ale is back on store shelves thanks to Justin Bunnell, the great-great-grandson of the man who created Venetian.

Venetian is a heady ginger ale made with real ginger juice, lime, and cane sugar. It's lightly carbonated and has just enough sweetness to balance with the spicy ginger - and less sugar than in most other sodas. It packs a powerful and very tasty ginger punch.

What's the story behind it?

Venetian Beverages began in the early 1900s when Michael Dorn built a plant on Pine Street in Burlington to mix and bottle his popular ginger ale. (Maaaybe some other stuff was going on in the plant? The family has heard some speculation and isn't entirely sure, but it was the Prohibition, after all.) By the mid 1940s the business had ended. The history and legacy of this ginger ale was discovered amidst family papers and mementos by Justin Bunnell a few years ago. He tested and adapted the old recipe and decided to bring his family's ginger ale business back to life.

Where is it made?

The old building on Pine Street is still there and now appropriately named The Soda Plant. It's home to galleries and shops - including a storefront for Venetian Ginger Ale. The ginger ale is mixed and bottled in Williston.

It comes down to two things: it's strong but not too sweet. The ginger flavor in Venetian is really potent - which I love. It's also less sweet than regular ginger ale which means you can actually enjoy it without being weighed down by sickly-sweetness. And it makes it especially nice for a mixer for cocktails.

How to enjoy it:

Well, just drink it! It's delicious all on its own. This ginger ale is unfiltered so give the bottle a quick swirl before popping it open.

It's also a great mixer for cocktails. The flavor is potent enough to stand in for ginger beer in drinks like a Dark n' Stormy or a Moscow Mule. The Venetian website has some other tasty cocktail recipes, too.

I enjoyed it in a simple Irish Buck: pour 1-½ ounces of Irish whiskey in a glass, add ice if you like and pour in a Venetian to fill the glass. Finish it with a squeeze of fresh lime.

Where to find it:

Stop by The Soda Plant to pick up some Venetian Ginger Ale at their shop. It's also sold in local groceries, restaurants and cafes. I found mine at Healthy Living in South Burlington. Visit the website for Venetian Beverages here to find these locations or to order it online.

Hungry For Vermont is me sharing some of my favorite Vermont specialty and gourmet foods: unique and delicious eats and drinks made right here in the Green Mountain State. All of the products I share are ones that I've tried, I love, I use, and that I'm hungry for! All opinions are my own.

Here's another Hungry For Vermont product you should check out:

Do you have a favorite made-in-Vermont food product I should know about? Tell me below in the comments!