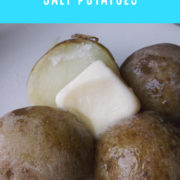 Have you ever heard of Syracuse salt potatoes? They're a regional favorite of upstate New York and a delicious discovery for this Vermonter!

I heard about salt potatoes for the first time at the start of one fine summer, from my friend Meghan. Our conversation went like this:

Meghan: "I went to Hannaford's to see if salt potatoes are in, but they didn't have any. The guy there said he's never heard of them."

Me: "What are salt potatoes?"

I had not, but I was intrigued! Meghan explained that they're small, white spuds that come in a bag along with a big packet of salt. All of that salt is added to the cooking water for the potatoes. "Then," she said, "you eat them hot with lots of butter." Wow, they sound simple—and they sound delicious!

Shortly after that conversation, Meghan made a trip to Syracuse, NY where she grew up, and where bags of salt potatoes are plentiful. She stocked up and brought back an extra bag for lucky me! The brand was Hinerwadel's Famous Salt Potatoes, and the bag proclaimed, "Now with "Less Salt, More Potatoes".

I cooked them up according to the recipe on the bag. Those little, steaming potatoes with white rings and swirls covering the skins were sublimely salty and buttery! The skins on the potatoes had taken on a thin salt crust, and the potato inside was soft and fluffy. My husband and I had them for dinner—nothing else, just those wonderful potatoes.

The history of salt potatoes

Salt potatoes are a regional favorite in upstate New York, especially in Syracuse where they seem to have originated. The Onondaga Lake area in Syracuse is full of salt springs and in the 19th century an industry sprung up to harvest the salt for distribution.

To extract the salt, the salty water from the springs was gathered into large trays and then allowed to evaporate, leaving the salt behind. Workers would scrape it from the trays, grind it, and package the salt for sale.

Many of the salt miners working in the area were Irish immigrants, and for their lunch would bring a few uncooked potatoes. They'd boil these potatoes in the plentiful salt water flowing from the springs, and the salt potato was born.

Having grown up in Bennington, Vermont a stone's throw from New York with several relatives living in New York, I was surprised that I had never heard of salt potatoes. Had my family been cruelly keeping the delicious taters from me??

I asked my mom, who grew up in Hoosick Falls about an hour outside of Albany and close to Vermont, about salt potatoes. She had never heard of them! It seems this area of New York is too far south to have ever been touched by the salt potato craze.

Next, I checked with family members who live in the Rochester, NY area: my Uncle Jack and cousin Meghann. And bingo! Though they hadn't heard of the Hinerwadel's brand specifically, my cousin said that there are many brands of salt potatoes in their grocery stores, and they all come with a packet of salt. My uncle and cousin both agree that salt potatoes are delicious, and shared that they're usually served at clambakes and lobster bakes.

This seems to jive with the history of the Hinerwadel brand. Their site says that John Hinerwadel began selling salt potatoes at his popular Syracuse-area clambakes in the early 1900s. More than one hundred years later they're still going strong, selling about a million bags annually.

I just love learning of regional favorites like this, with their own little historical tales and devoted local fans.

Why you'll love making them at home

It's okay if you can't find bags of salt potatoes at the store because you can easily replicate the dish with this salt potatoes recipe, and it only requires two ingredients. Waxy, small potatoes are key here because they cook through quickly while absorbing some of the salty brine. They also keep their shape, unlike starchy potatoes.

I chose pickling salt because it has a very fine texture like the salt that's packaged with salt potatoes. It dissolves quickly once added to the water.

Make Salt Potatoes for summertime barbecues and clambakes, or any time of the year as an easy and fast side dish.

🔪 How to make Syracuse Salt Potatoes

Bring water to a boil in a large pot and add in the cup of salt.

Put potatoes in the boiling water and cook for 15 minutes or so until the potatoes are fork tender.

Step 3: Get the butter and enjoy!

Serve the Salt Potatoes while they're hot, and with plenty of melted butter.

The recipe for Syracuse Salt Potatoes is below, and here are a few more posts about favorite regional eats!

Great Places To Get Apple Cider Doughnuts Near Burlington
Experience the very best of fall at these Vermont orchards: pick apples, drink cider, and most important of all: get apple cider doughnuts!
Take me there 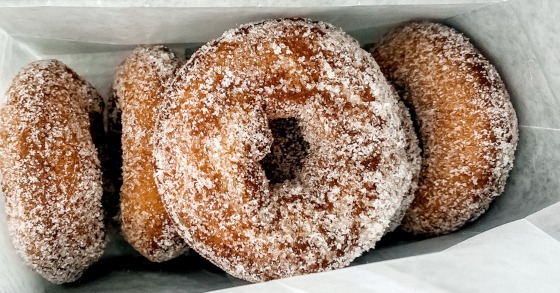 Chilli Sauce
This family recipe for Chilli Sauce is savory with tomatoes, peppers, and onion and sweet with cinnamon and clove. It's a great sauce to top grilled meats and veggies.
Take me there 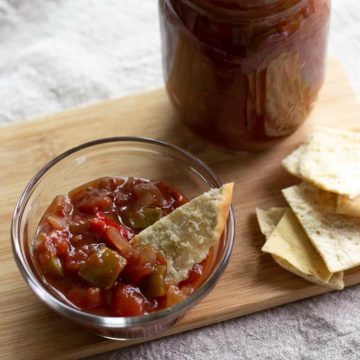 💬 Have you ever heard of these taters? Tell me in the comments below! 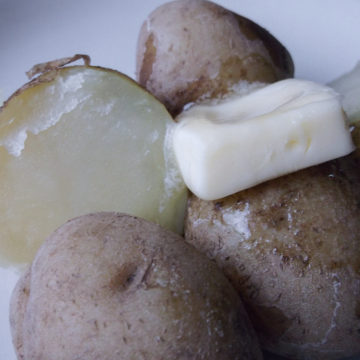 Nancy Mock
Have you ever heard of Syracuse salt potatoes? They're a regional favorite of upstate New York, really delicious, and a very easy to make at home!
5 from 2 votes. Tap stars to vote
Print it! Pin This Recipe
Cook Time 15 mins
Total Time 15 mins
Course Side Dish, Summer Side Dish, Vegetables
Servings 10 servings