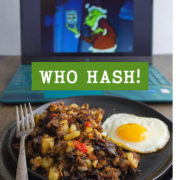 A nod to the classic How The Grinch Stole Christmas, this Who Hash Recipe made with roast beef and potato is savory and so delicious. No wonder the Grinch stole some!

What a Grinchy thing to say!

Go ahead and roll your eyes, but we all have our favorite holiday specials, and favorite lines from those shows and movies, too! ("Nobody likes a Charlie-in-the-box!")

My friend and I decided to recreate some foods featured in our favorite holiday shows. He created a homemade cheese pizza just like Kevin's in Home Alone!

And I made this Who Hash—like the last can of Who Hash that the Grinch stole in the classic, How The Grinch Stole Christmas.

Speaking of holiday classics, have you tried Elf Spaghetti?

Why you'll love this dish

No offense to the Grinch, but I prefer a hash that's a cut above the canned variety. Perhaps The Grinch does, too, but we understand that he was pressed for time that evening, and really he was just trying to make a point: for the Whos to quiet the heck down so he could relax on Mt. Crumpit!

Anyway, this recipe for Who Hash is much tastier than any canned hash. It has diced potatoes, onions, and chopped roast beast—whoops, I mean beef!

This beef hash recipe is a great way to use up a holiday or Sunday evening roast, and it comes together fast for a savory breakfast, brunch, or casual dinner.

🔪 How to make this Who Hash recipe

In a large bowl mix together diced roast beef, diced cooked potato, and diced onion. Mix these together with milk and seasonings.

Heat oil in a large skillet over medium heat, and when it's hot add the hash mixture. Spread it in an even layer and let it cook for 10 minutes. Once a crust has formed on the bottom, stir the hash around and cook it for another 5-10 minutes until it's hot and browned throughout.

Step 3: Invite your Grinches to join you!

Serve plates of Who Hash while it's hot, with fried or scrambled eggs and buttered toast or hot biscuits on the side.

What is Who Hash made of?

We may never know the true ingredients of that cartoon can of Who Hash: there was no ingredients label! In real life, canned hash is usually a blend of potatoes and either beef or corned beef. Either way, this homemade Who Hash is far tastier than any canned Hash.

What's the best potato to use in Who Hash?

I prefer to use a waxy type of potato in this recipe: like Yukon gold or white potatoes. They hold their shape better during cooking than starchy potatoes.

Prepare a lovely Party Cheese Board for the holiday party!

What a tasty, savory dinner of Who Hash—and it makes a hearty breakfast, too! It'll be easy to soften the heart of even the Grinchiest Grinches with this dish!

"Fahoo Fores, Dahoo Dores!" The Who Hash recipe is below, and here are a few more holiday treats for you:

💬 How do you like this Who Hash? Leave a comment below and give this recipe a star rating! 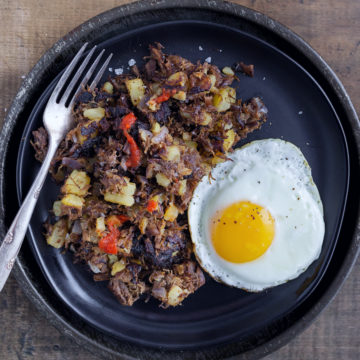 Nancy Mock
A nod to the classic How The Grinch Stole Christmas, this Who Hash Recipe made with roast beef and potato is savory and so delicious. No wonder the Grinch stole some!
4.75 from 4 votes. Tap stars to vote
Print it! Pin This Recipe
Prep Time 5 mins
Cook Time 20 mins
Total Time 25 mins
Course Breakfast, Brunch, Christmas, Dinner, Side Dish
Servings 4 servings