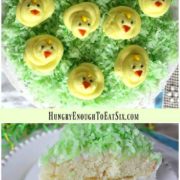 Think Spring and eat it too! This cake is full of bright lemon flavor, buttercream, and happy spring chicks on coconut grass.

In our neck of the woods we were teased with what seemed to be an early spring that started up in late February. The snow disappeared, the air was warm, the sun was out, and all the little kids at my school gleefully ditched their snow pants and mittens. A few even came to school in shorts.

That tease came to a bitter end in mid-March when we received over two feet of new snow (as well as two snow days to spend at home, which admittedly were quite fun!) The sun went away, the wind kicked up and the temperature plummeted. Bye-bye, spring.

And as though that were not enough, we received another eight inches of snow last night. Ugh.

Nevertheless I am still thinking spring, dreaming of spring, eagerly awaiting spring. In my kitchen I am trying to work my witchcraft to bring about that spring... by dreaming up some Spring cakes!

I have baked some sweet, sweet sunshine into this cake, in the form of lemon marmalade and lemon syrup - permeating two soft layers of white cake and slathers of buttercream frosting.

And atop this cake are two more calls to spring: green grass (shredded coconut, that is) and little chicks!

I got the idea for a chick-topped cake from an unlikely source: a very tiny reference in a hilarious book that has nothing to do with baking.

The book is The Secret Diary of Adrian Mole, Aged 13-¾  by British author Sue Townsend. It's Easter and Adrian visits his grandmother's house.

"...had a fantastic tea at Grandma's. She made a cake covered in little fluffy chicks. Some of the fluff got into my father's mouth, he had to have his back thumped hard. He always manages to spoil things. He has got no Social Decorum at all."

That image of the little fluffy chicks cake stayed with me - I don't know why. I guess it just sounds very cute: cute enough to charm an angst-ridden, self-proclaimed "undiscovered intellectual" 13-¾ year old.

It inspired me to create this fluffy chicks cake, and all parts of the chicks are edible: buttercream and sprinkles.

So no back thumping. Just a happy, little spring cake!

The recipe for this Spring Chicks Cake is below, and here are more recipes that are bright and sweet, too.

Lemon & Cardamom Sweet Rolls
Lemon and cardamom sweet rolls hold a swirl of fragrant spices and bright lemon. They're a delicious treat for breakfast or afternoon snack.
Take me there 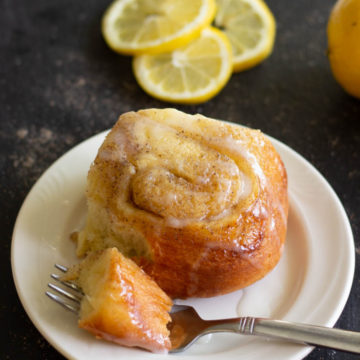 Welcome Spring Cake
With bright colors outside and in, and a light citrus flavored-cake this is a perfect cake to celebrate Spring!
Take me there 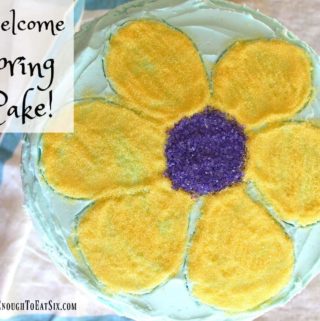 This recipe is featured in the collection, Springtime Cakes & Sweets for Easter Brunch or Anytime.

>> Tell me how your cake turned out. Leave a comment and a star rating below.

For the lemon syrup:

For the coconut "grass":

While the cake layers chill, prepare the coconut and frosting: