It has been my quest to bring on Spring, and dream up some sweets that keep us chanting, "Think Spring!" Even as the snow continues to fall.

I walked the aisles of the grocery store thinking on what I flavors and ingredients I could try throwing together for a springtime treat. As I turned the corner I was struck full-force by a Technicolor gleam: from the Easter display. Plastic eggs, Easter basket grass, foil-wrapped chocolates, boxes of marshmallow Peeps in ever-expanding choices of flavors and shapes, and bags upon bags of candies. All these goodies were bathed in brilliant never-seen-in-nature shades of pink, blue, yellow, purple and green.

There were chocolate rabbits too of course: deep, chocolaty brown in that rainbow sea. The cheaper, chocolate bunnies all stared out from plastic wrapped boxes with that one white candy eye that gives them a terrified expression, as if they're wondering if their heads are next to be bitten into. Or maybe they're stunned by all that gleaming color around them.

Though I had not intended to make an Easter treat, it was hard to look over all that sweet stuff and not feel inspired.

One treat I found on the Easter display that was new to me were Iddy Biddy Bunnies from Russel Stover: just a little package of little chocolate bunnies! Once I saw these the idea for these cupcakes came together very quickly.

The cupcake itself is a simple yellow cake, but it hides a surprise: jellybeans! They are secreted away in the center of the cupcake.

When you bite into the cupcake and find the jellybean stash, you will experience in miniature that color explosion of the Easter aisle at the grocery store.

On top of the cupcake is some grass-green buttercream frosting in which the Iddy Biddy bunnies get to frolic. Have you ever watched the animated Wallace & Gromit movie "The Curse of the Were-Rabbit"?

The bunnies on the tops of these cupcakes will make you think of the hundreds of bunnies playing on the grounds of Tottington Hall!

These cupcakes would make a fun treat at an Easter brunch or party...

or just as a treat for the hungry bunny-loving fans in your house! 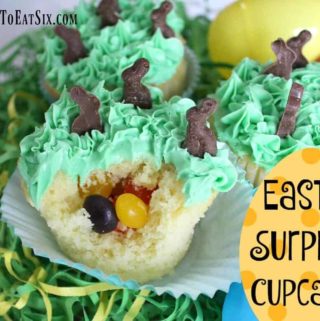 For the buttercream frosting: