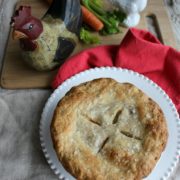 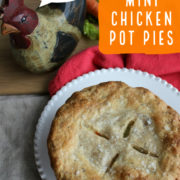 Mini Chicken Pot Pies hold tender chicken and veggies in gravy tucked in a pastry crust. And you can freeze them for later!

What a perfect comfort food: a savory, gravy-laden filling in a flaky pie crust!

I remember as a teen buying little 4-inch diameter frozen chicken pot pies (Swanson? Marie Callender?) that held about three tablespoons of chicken and gravy and yet took upwards of an hour to bake.

That store-bought, teeny, supposed convenience food was never worth the wait. However, if you're baking up a frozen, homemade chicken pot pie, you know it will be worth the bake time, and definitely worth the wait.

Here's a seemingly random, but actually related side note. Though it's been a very long time since we've watched the late 90's TV show Just Shoot Me, my husband and I remember this bit very clearly, and we love it.

We sang the ditty many, many times while making and eating these mini Chicken Pot Pies. Watch the quick clip above and you will understand.

This recipe makes six individual chicken pot pies, and there are directions for freezing some or all of the pies. They'll be great to have on hand for a future dinner - just bake them up.

The filling is the classic mixture of chicken breast, carrots, celery, and onion. Peas are also a favorite ingredient, and they're listed as an option. (I left them out of our pot pie because we have many anti-pea people in this house!)

The crust is the savory version of my Perfect All-Butter Pie Crust. Flakes of Maldon Sea Salt are gorgeous scattered across the tops!

Cook the chopped vegetables in butter until they're soft. Sprinkle flour over the mixture, then add in stock and milk. Cook until the liquid thickens, then stir in the chopped chicken. Let the filling cool.

Divide the All-Butter Pie Crust dough into 6 pieces. Roll them out into circles, and fit them into the mini pie plates.

Step 3: Add the filling and the top crusts

Spoon filling into the crusts. Divide and roll out the rest of the dough. Fit the dough circles over the tops of the pies and crimp the edges.

Brush the pies with egg wash, then bake them for about 30 minutes until the crusts are brown and the filling is bubbling. Let the pies cool a little, then enjoy!

The recipe for Mini Chicken Pot Pies is below, and here are some other warm and hearty Savory Pies!

Thanksgiving Leftovers Hand Pies
All those Thanksgiving leftovers like mashed potatoes, turkey and cranberry sauce tucked into a flaky hand pie!
Take me there 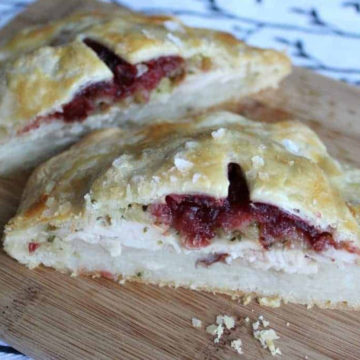 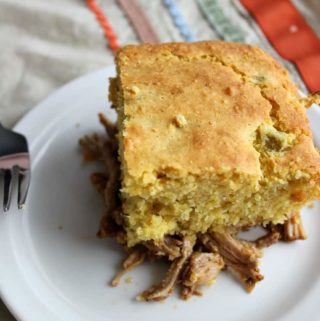 Savory Carrot Cheddar Tart
This recipe used half of the recipe for Buttery Pastry Dough. You may also use your own favorite pie or pastry dough, or store-bought dough: enough for one shell.
Take me there

💬 After you try this recipe let me know what you think: click the stars to rate the recipe and leave a comment below! 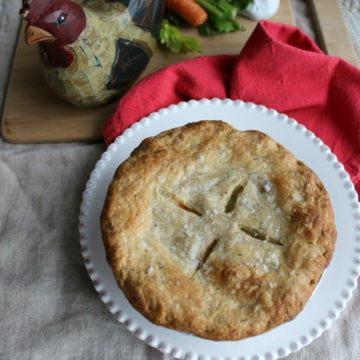 Option: Make Your Own Poultry Seasoning