From a Far-Off Land: A Gift of Spices from Doha. 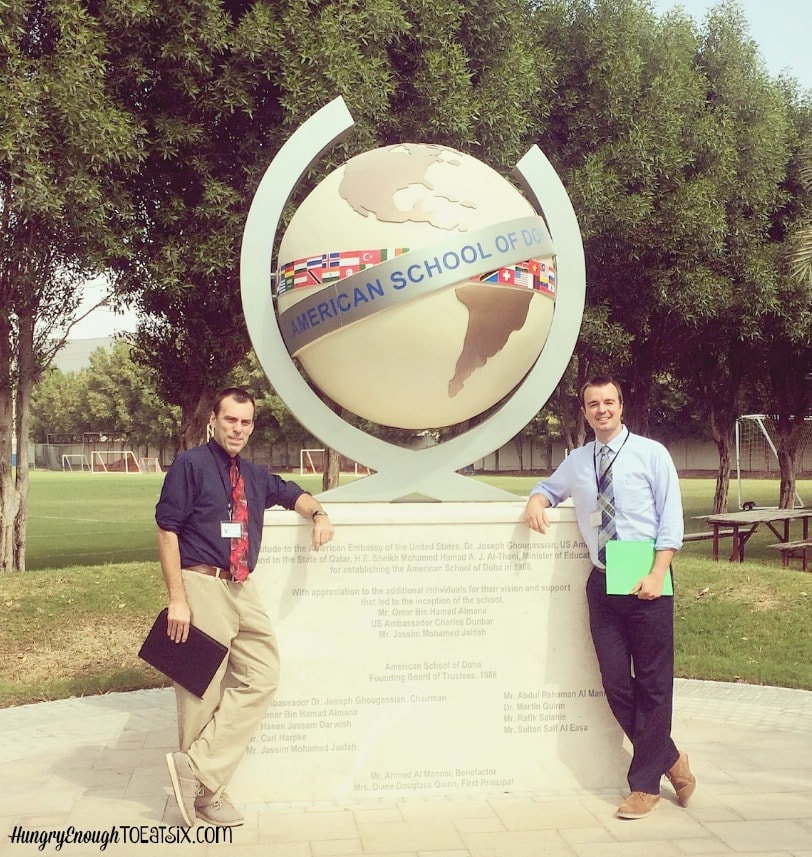 Christian and Chris at the American School of Doha

Recently my husband Christian went an amazing journey. He and our friend Chris had a unique opportunity to attend the World Innovation Summit for Education (WISE) that took place in Doha, Qatar. They went as ambassadors not only for the elementary school where they teach, but also for Southern New Hampshire University, where they are enrolled for their Masters Degrees in Education.

Just before the start of the first day at WISE. 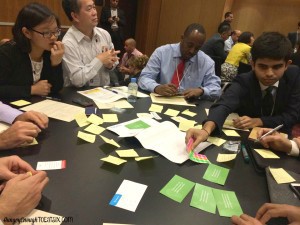 International collaboration: sharing ideas for the school of the future.

In Doha they had the chance to collaborate with educators from all over the world, and hear inspiring speeches from First Lady Michelle Obama, Her Highness Sheikha Moza bint Nasser of Qatar, and Dr. Sakena Yacoobi the founder of the Afghan Institute of Learning which provides education to women and children. 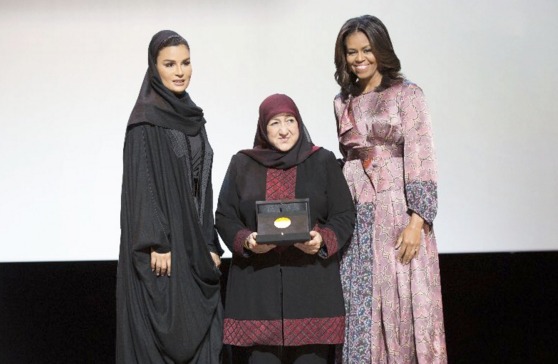 They visited schools in Doha, and also took them to restaurants, museums, and markets in Doha. Not to mention to the beach for a swim in the Persian Gulf! 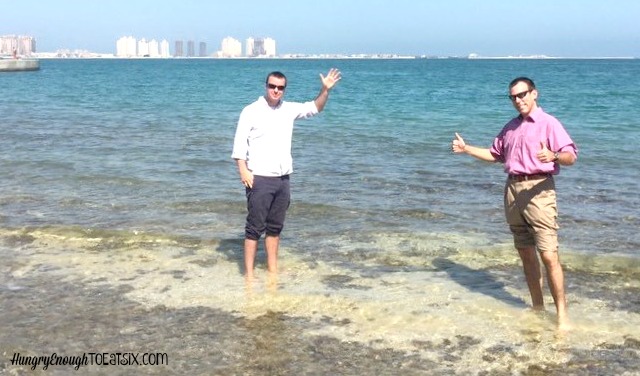 Schmid and Mock wade into the Persian Gulf!

They documented their trip on their school blog for students, families and friends to read. After looking through the posts a friend of mine commented, "You can tell Mr. Mock's wife is a foodie!" 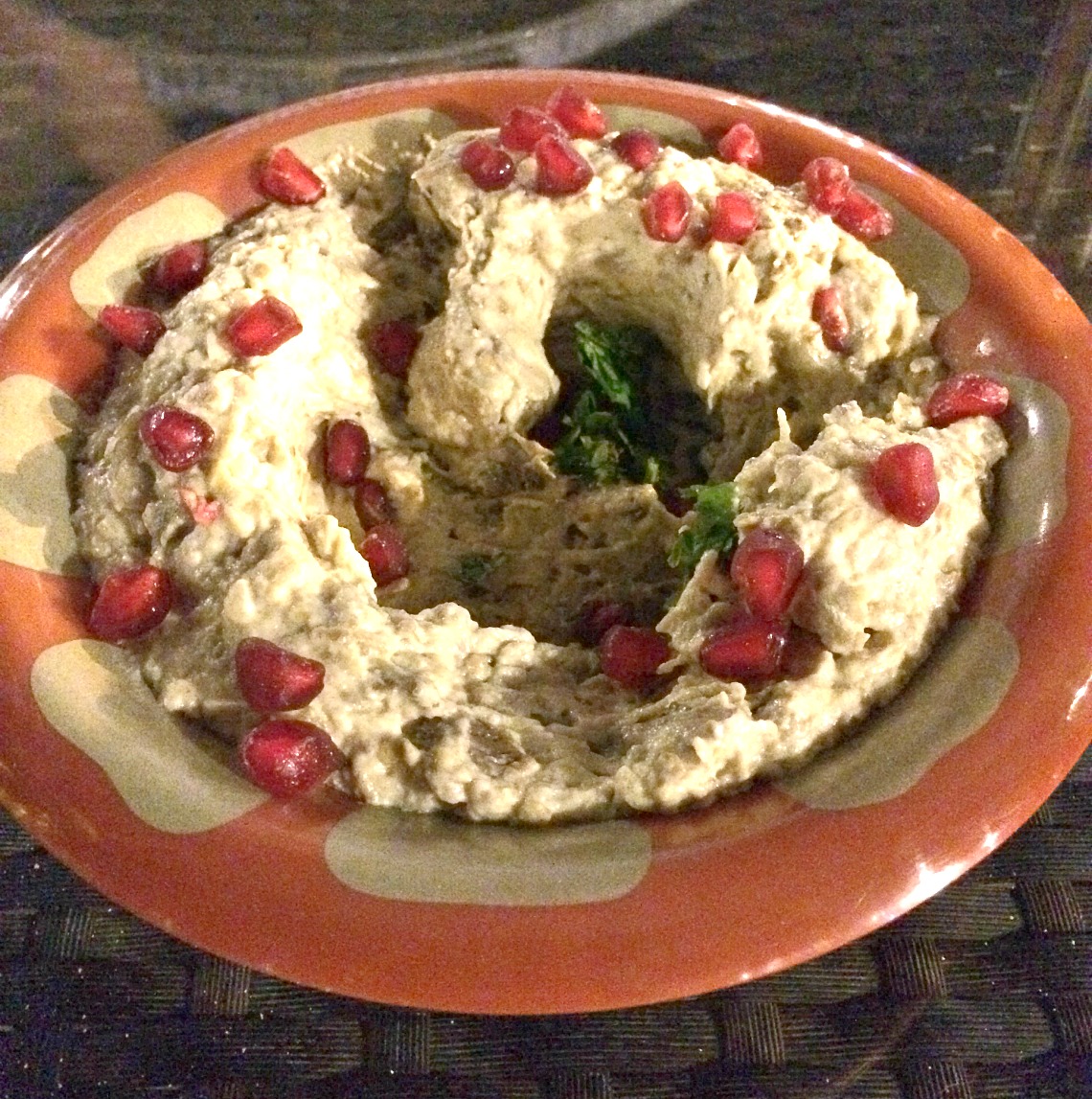 And perhaps my blogging habits have rubbed off on him, for there were many, many photos of the food! 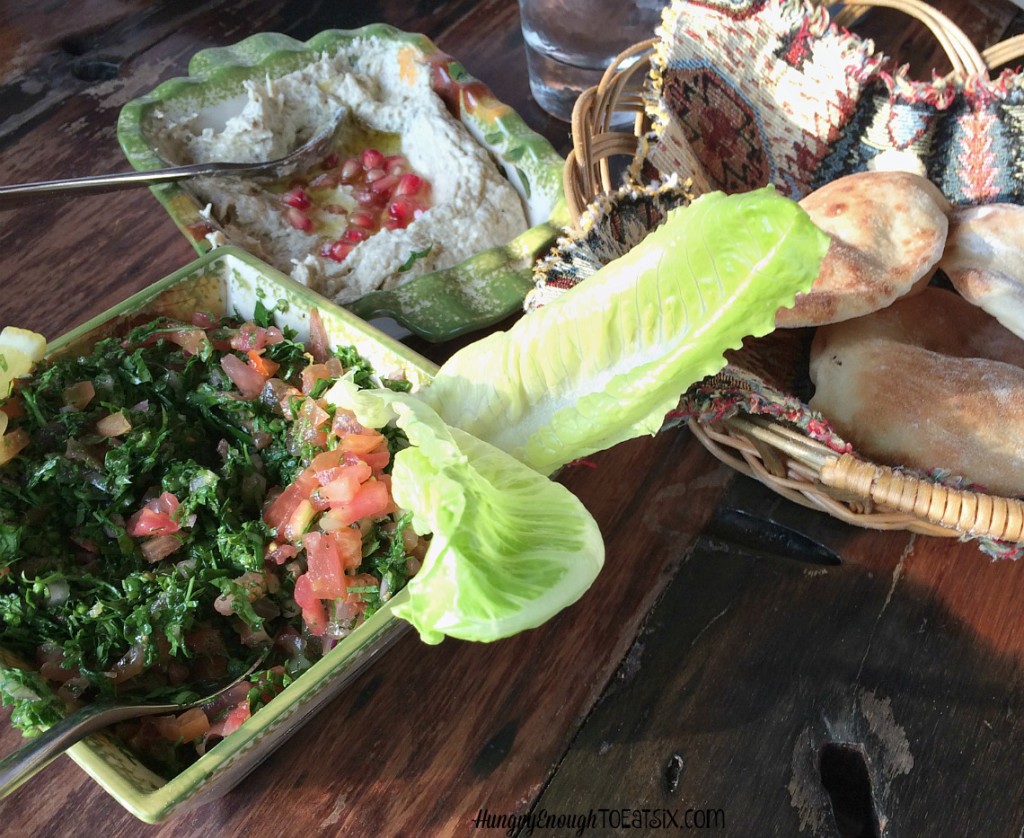 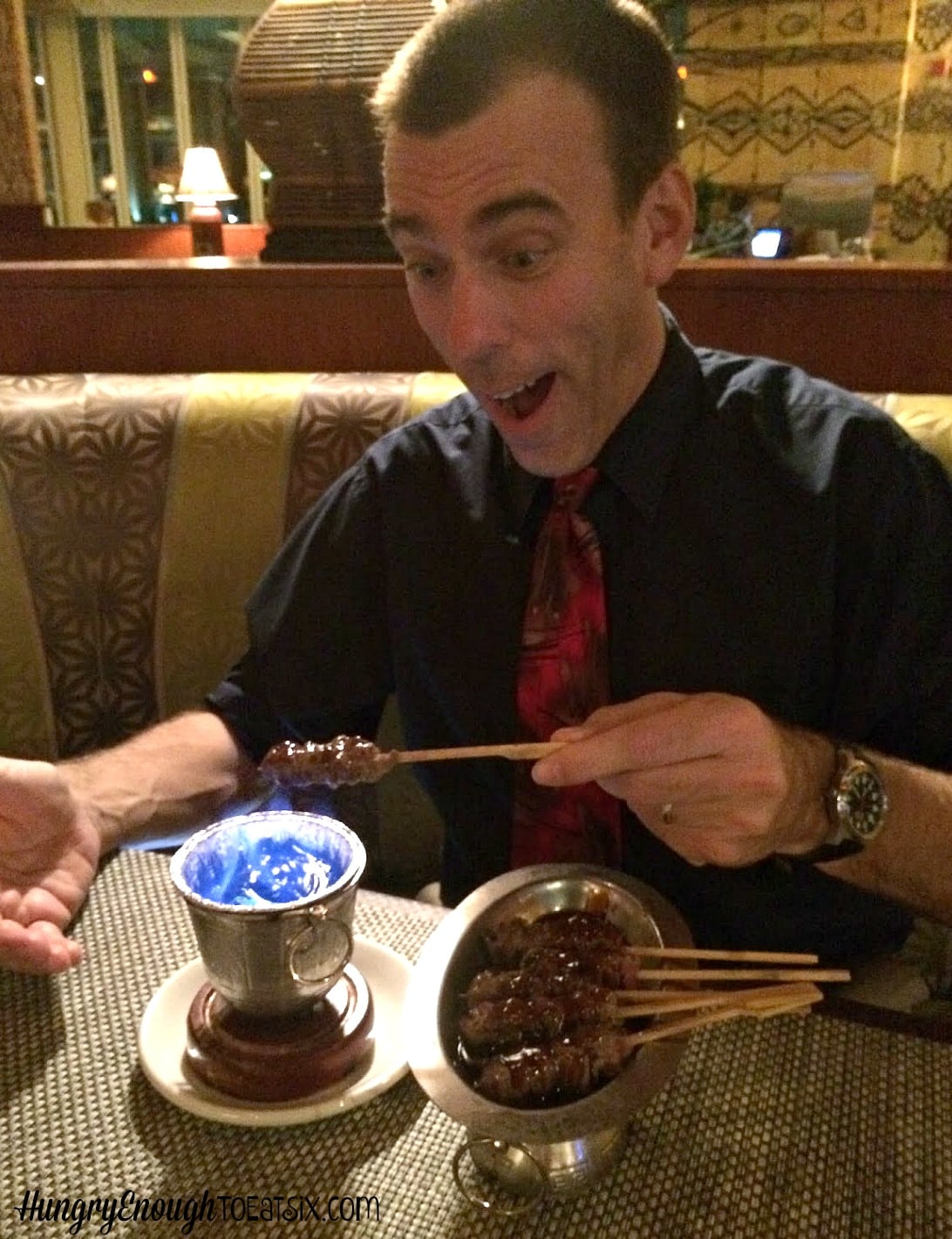 Kabobs cooked at the table over a personal hibachi.

Photos of all the amazing dishes they were able to sample, the spreads put out for breakfasts at the hotel, the kabobs served alongside mini hibachis to cook them at the table. 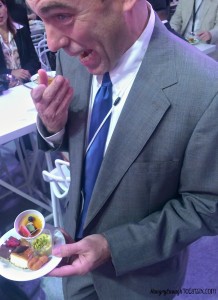 Well someone is excited! 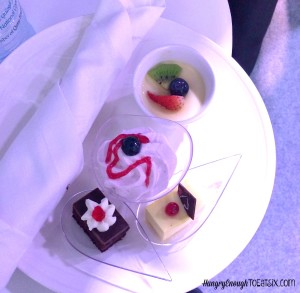 And this is why: Petit Fours, flavored custards such as pistachio, and fruits were among the desserts. 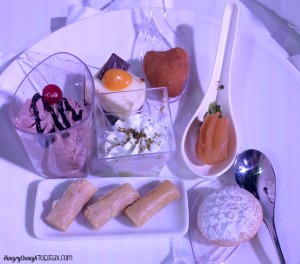 One day Christian tried a fast food dish called "Magic Chicken." It looked intriguing but when I asked him what was in it he didn't know! Only that it was "magic" and delicious. 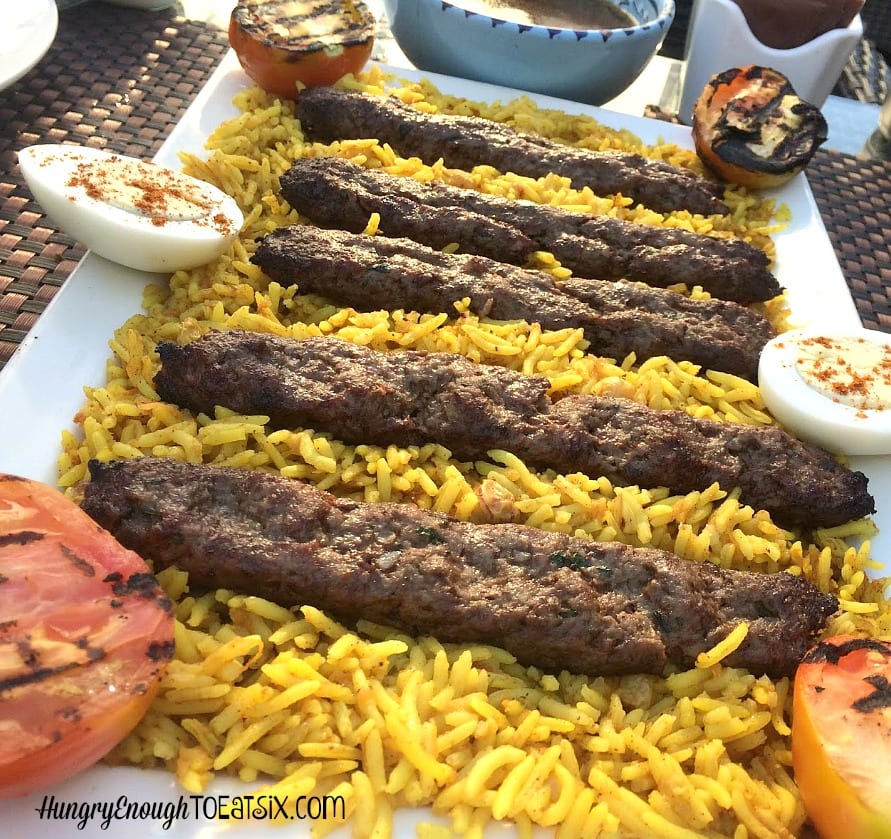 I had once thought my husband to be fussy about new food, but on this trip he proved quite brave and adventurous! 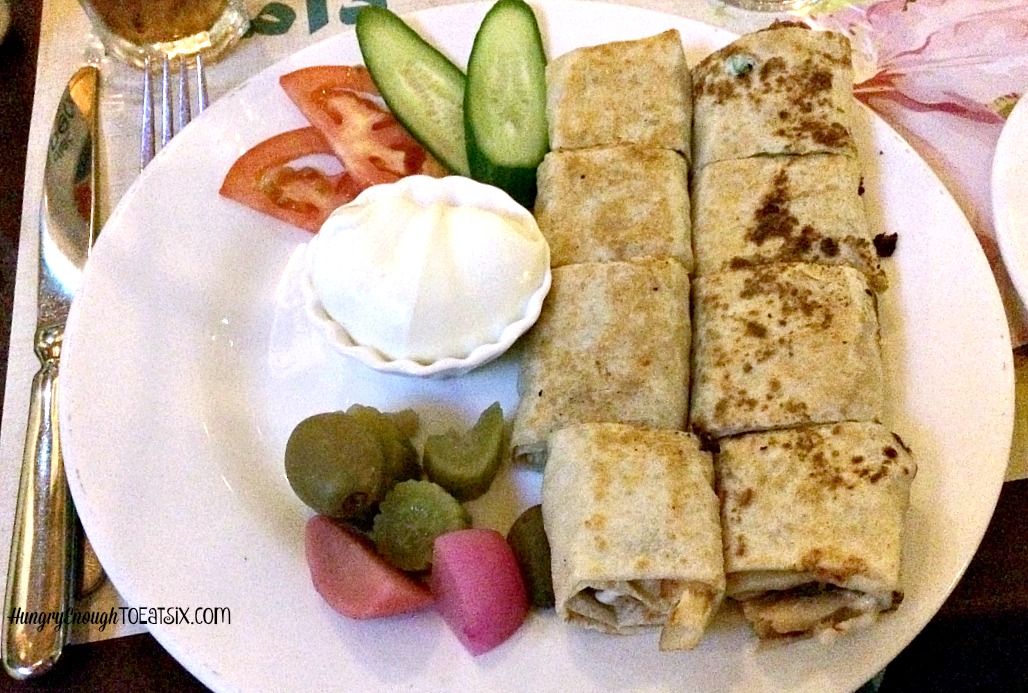 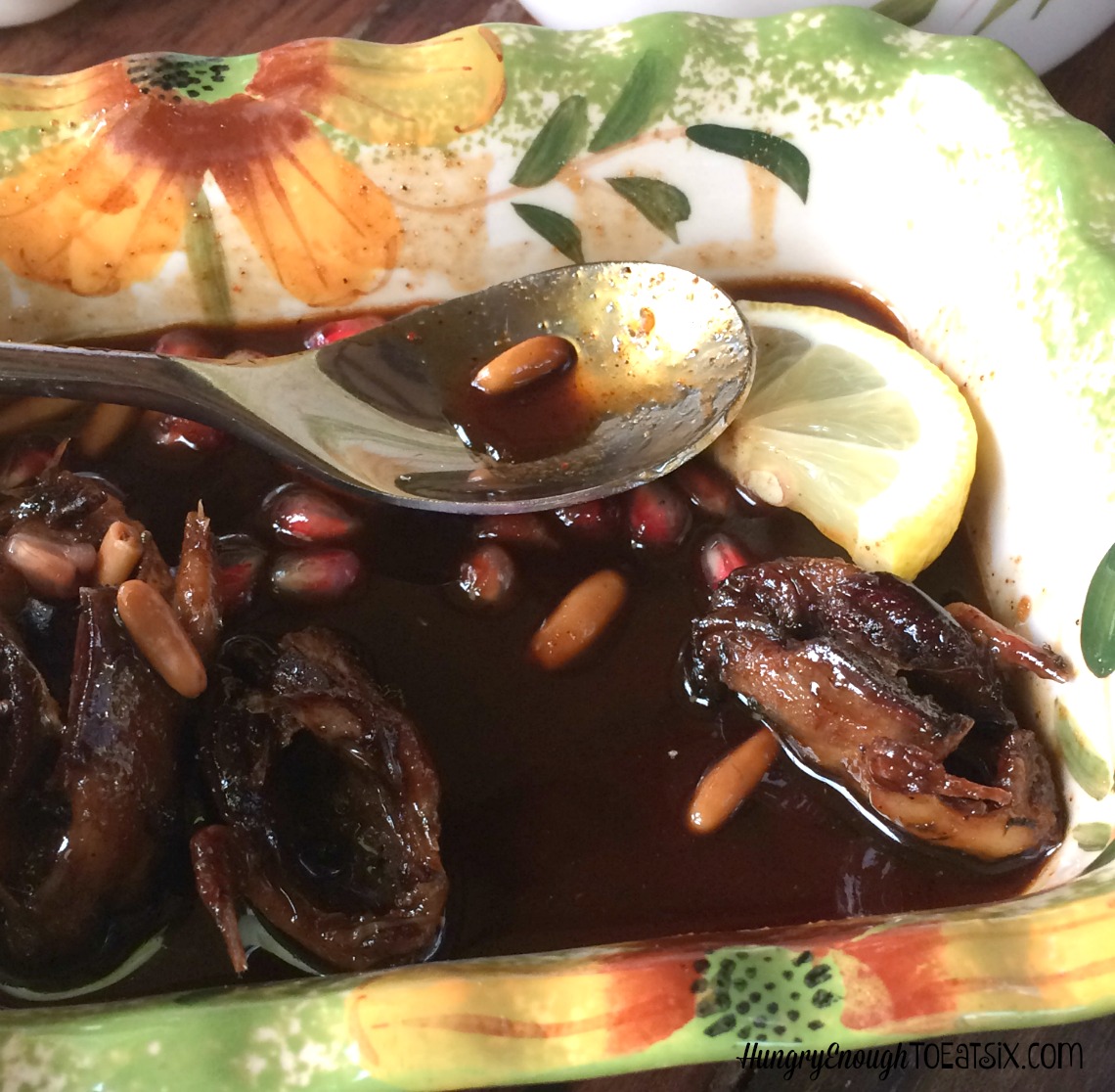 At a Lebanese restaurant, a dish of Dilijan Birds with pine nuts and pomegranate.

Christian did draw the line at Dilijan birds (tiny birds, meant to be eaten bones and all.) I would have, too. Chris ate a couple, but said he should have stopped after the first one.

One of the spice markets at Souq Waqif.

Quite exciting for me were the photos of the spice markets! I wish I could have been there to take in the aroma of all the spices laid out side by side in deep piles, booth after booth, the scents intoxicating and overwhelming all at once. And not overwhelming in a Yankee Candle store sort of way. Christian said it just smelled really, really good. I'm a lucky girl because he grabbed several of these spices for me! 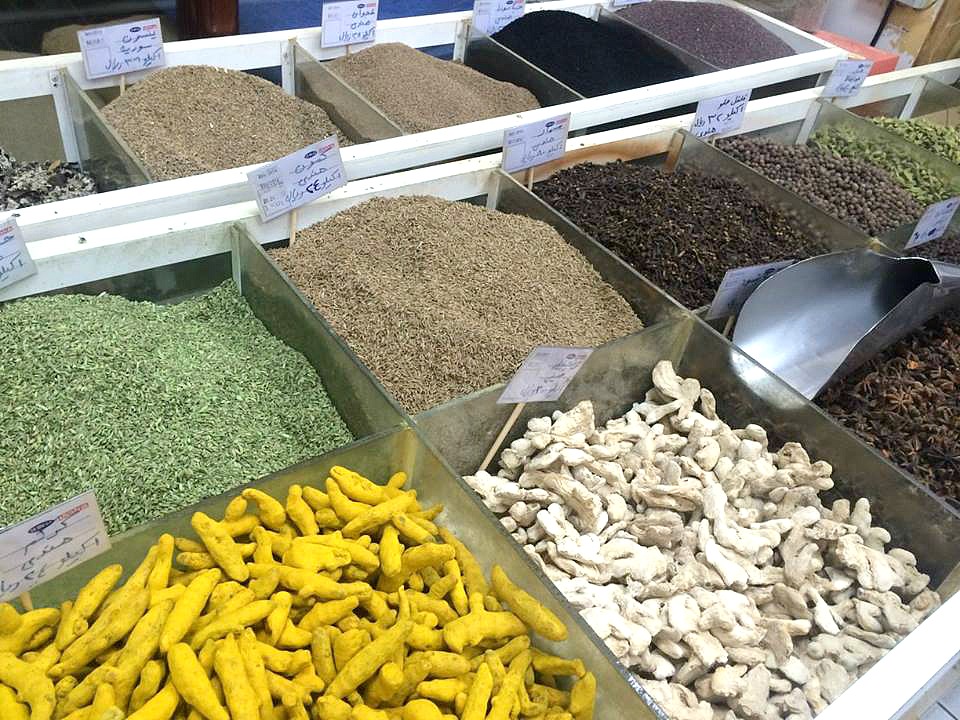 The language barrier was a bit of a problem when he tried to choose the spices. Upon inquiring about one bin of brownish seeds he was told they were "brown seeds". Another inquiry about a bin of deep black seeds was answered with "black seeds". So in the end he just chose a few that looked interesting and left it to me to sleuth. 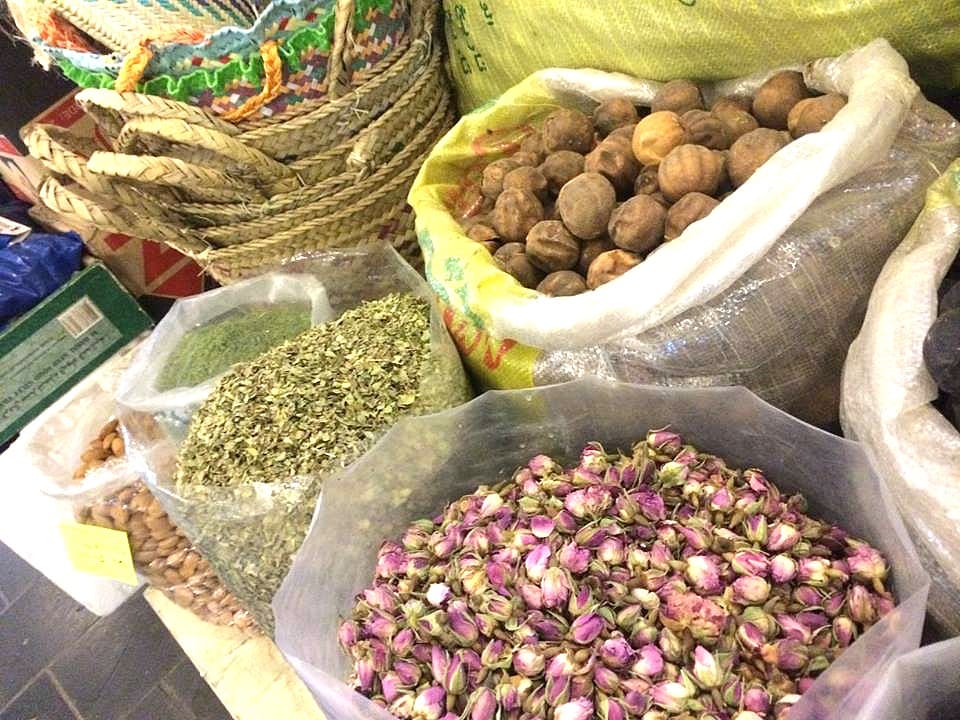 When we finally had Christian back home after a week away (insert HUGE sigh of happiness and relief), I was presented with five bags and one little jar of beautiful, vibrant-colored spices. 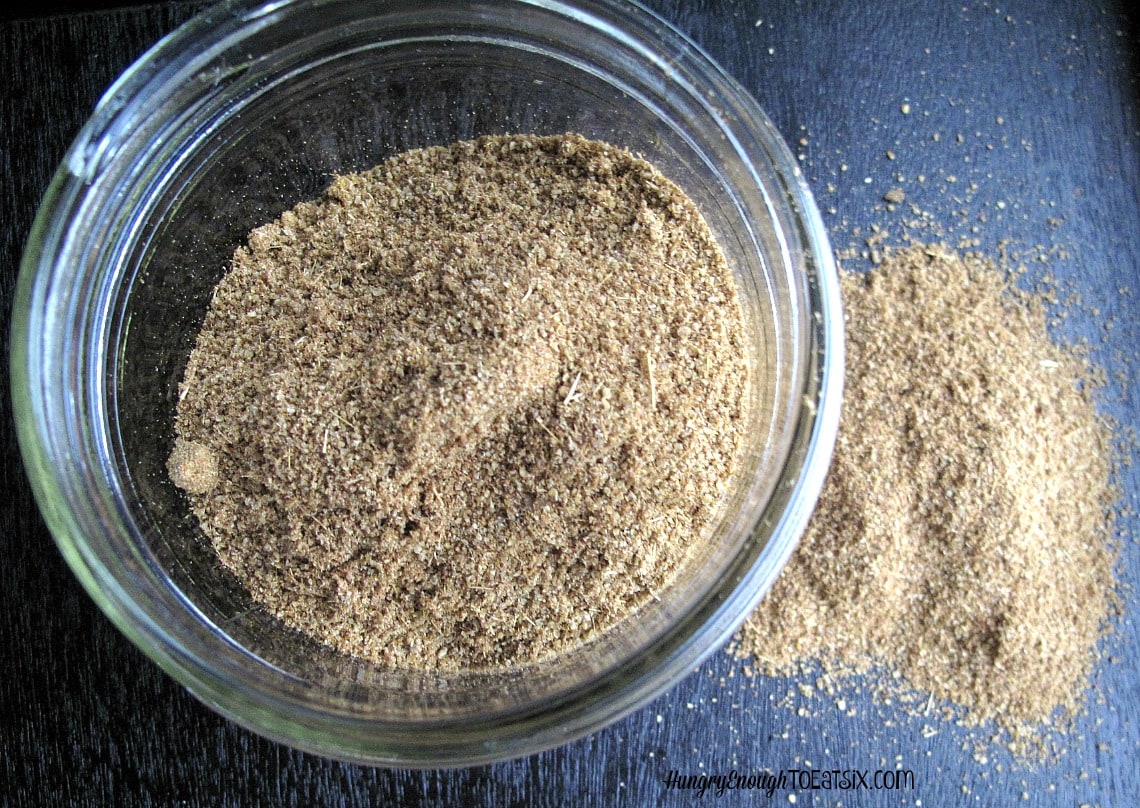 There was no mistaking the identity of two of the spices: the pronounced scents of cumin and curry could not be contained by the thick, plastic pouches. 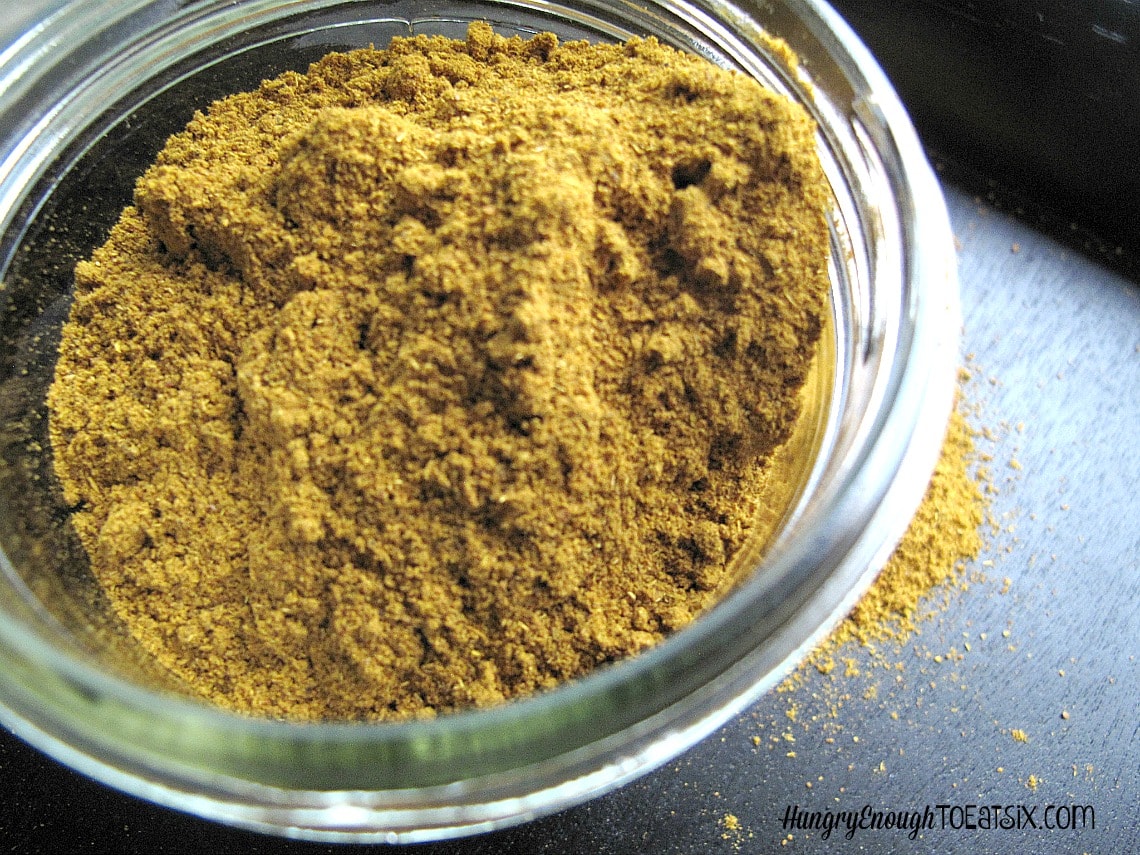 They both seem to me to be more intense and aromatic than what I've purchased in the store. The curry has pronounced notes of cinnamon and I'm guessing a good dose of chiles based on the heat I got when I took a taste! The cumin is also intense, and peppery. 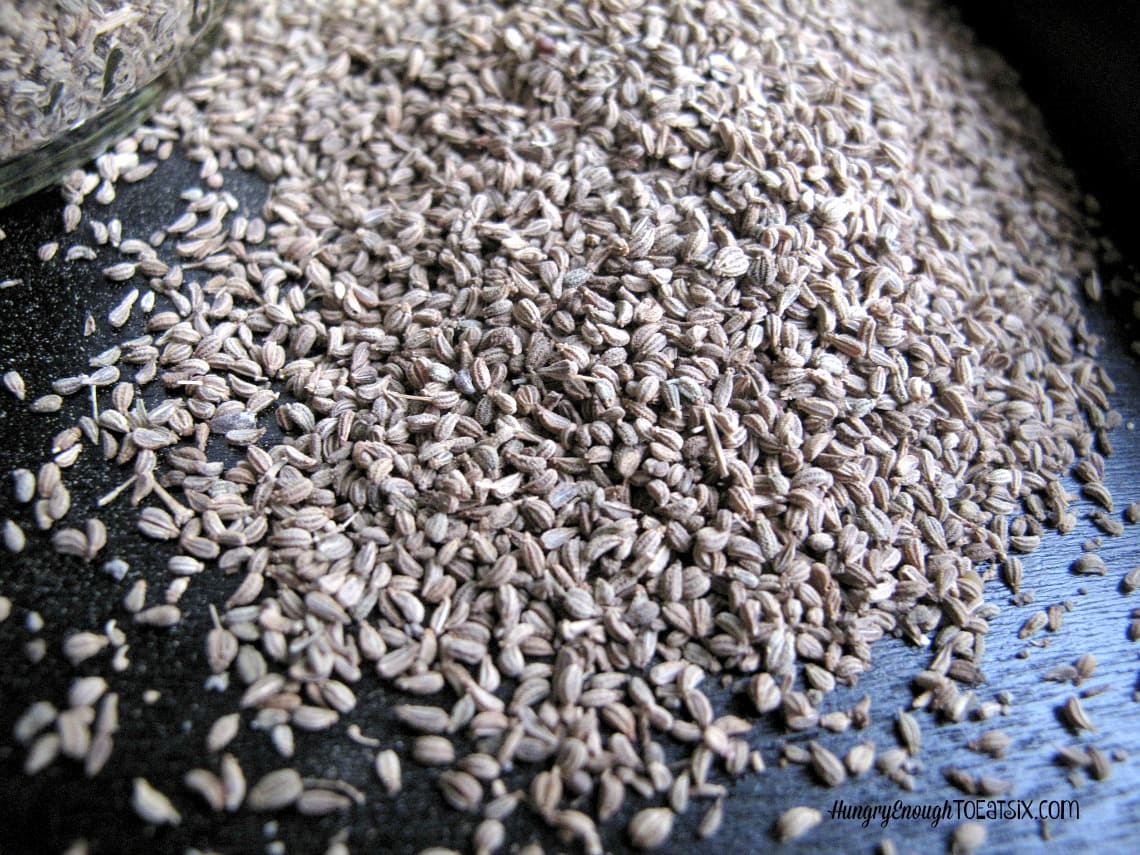 Another held a mound of a spice trickier to identify: tiny light brown seeds with a few bits of stems visible, and the scent grassy and light. They look a little like celery seeds, also like parsley seeds but the flavor is neither. It has a scent similar to thyme, but the taste was sharper. After a little digging on the net and through my Food Lover's Companion, I have concluded that it is carom, or ajowan. Food Lover's Companion says ajowan is good in chutneys, curries and in breads. Hey, I like all those things! 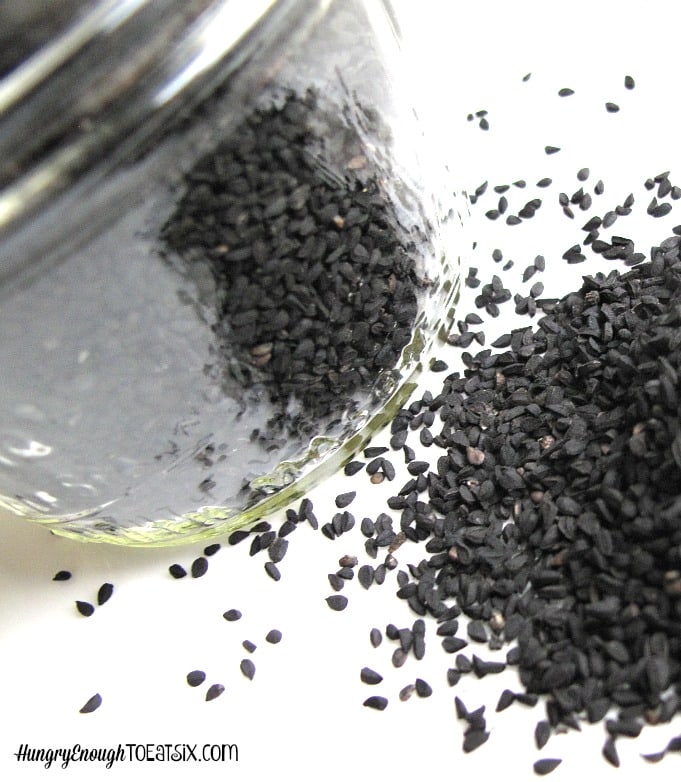 Another bag held jet-black seeds. They almost look like sesame seeds but tinier with sharper, more angular edges. The taste is intense and peppery! I was able to locate these quickly online: commonly called onion seeds but the true name is nigella seed. These can be used to season breads, chutneys and vegetables. 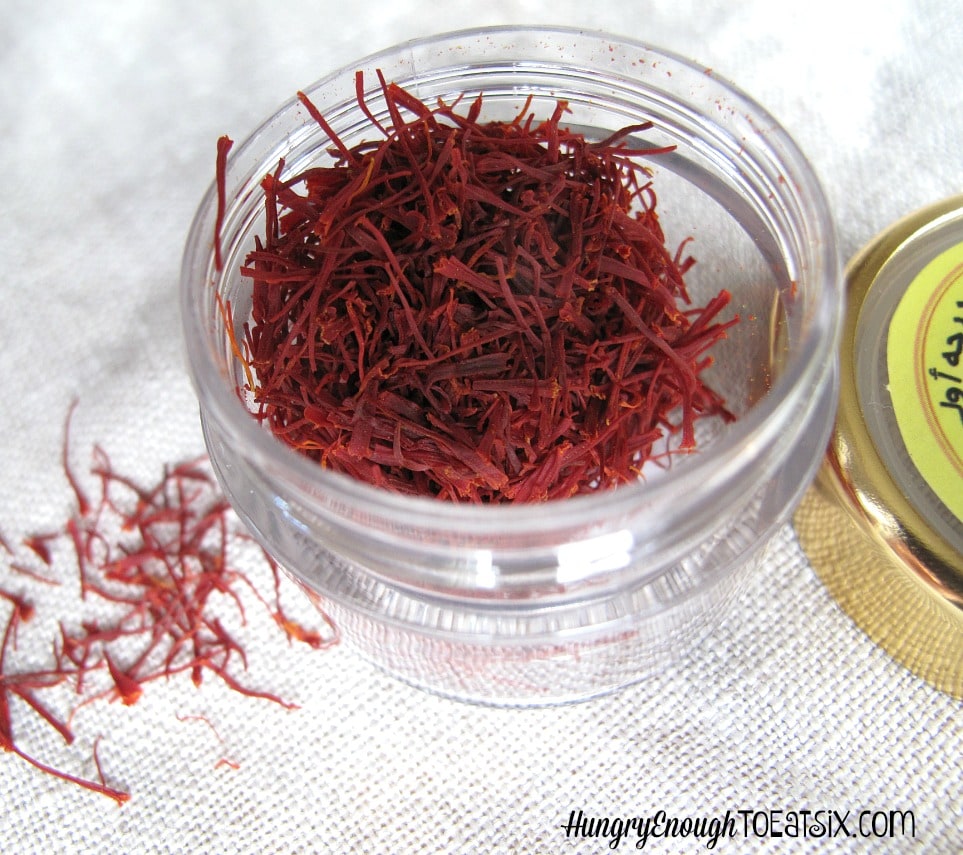 My husband was most excited about the last two spices. The first came in the tiny jar: saffron! 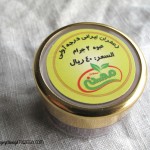 He thinks he was able to purchase it for about $2.00 per gram, which is incredibly inexpensive for the one of world's most expensive spices. (A quick check at Penzeys.com shows saffron prices to be between $18.00 and $29.00 per gram.) 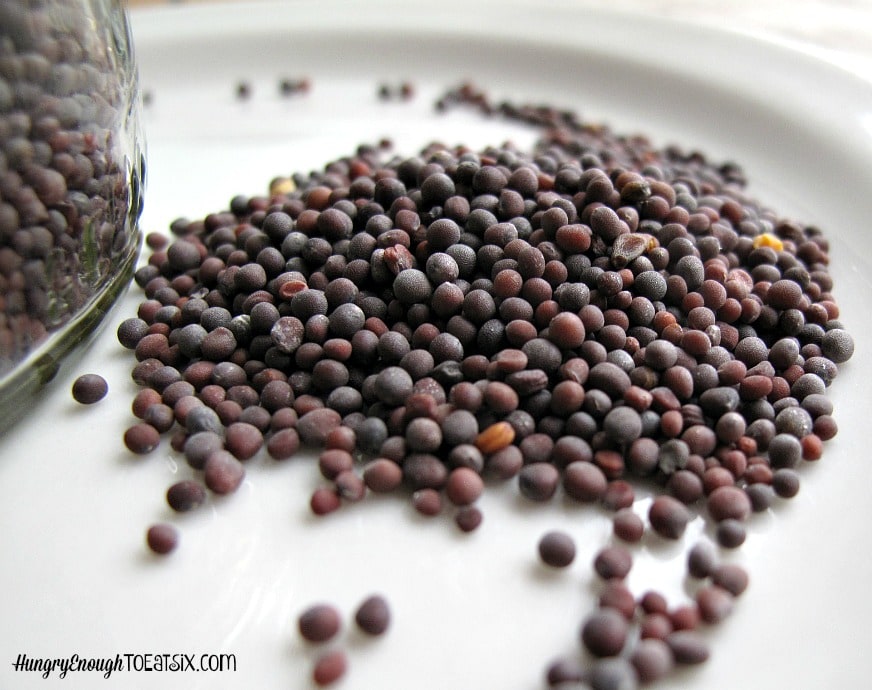 The last bag held round, tiny seeds in shades ranging from magenta to bluish-purple. When i tried a few I knew right away, and online searches confirmed, they are mustard seeds. The flavor is deep, and reminds me of Chinese hot mustard. The flavor is also like a hearty pub mustard. A friend of ours said that making mustard from scratch is fairly easy, and I'm eager to give it a try with these seeds.

Ooh, the possibilities with new spices on hand! I've already experimented a little. I added the cumin and nigella to a homemade beef stew. And the curry was quite tasty tossed with peanuts. What else could I try? 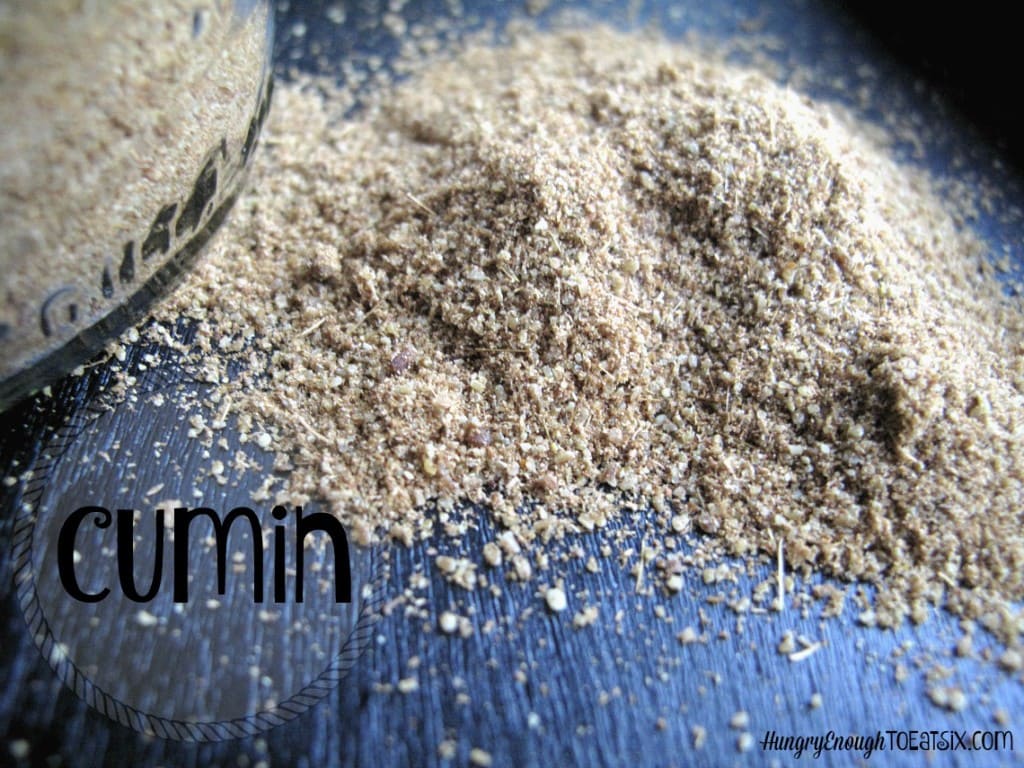 Cumin: I use it often in Mexican dishes like Jalapeno, Chicken & Cheese Pie or Taco Pizzas. I might give it try in this recipe for Slow-cooker Copycat Chipotle Barbacoa, and in Mexican Chicken Corn Chowder. 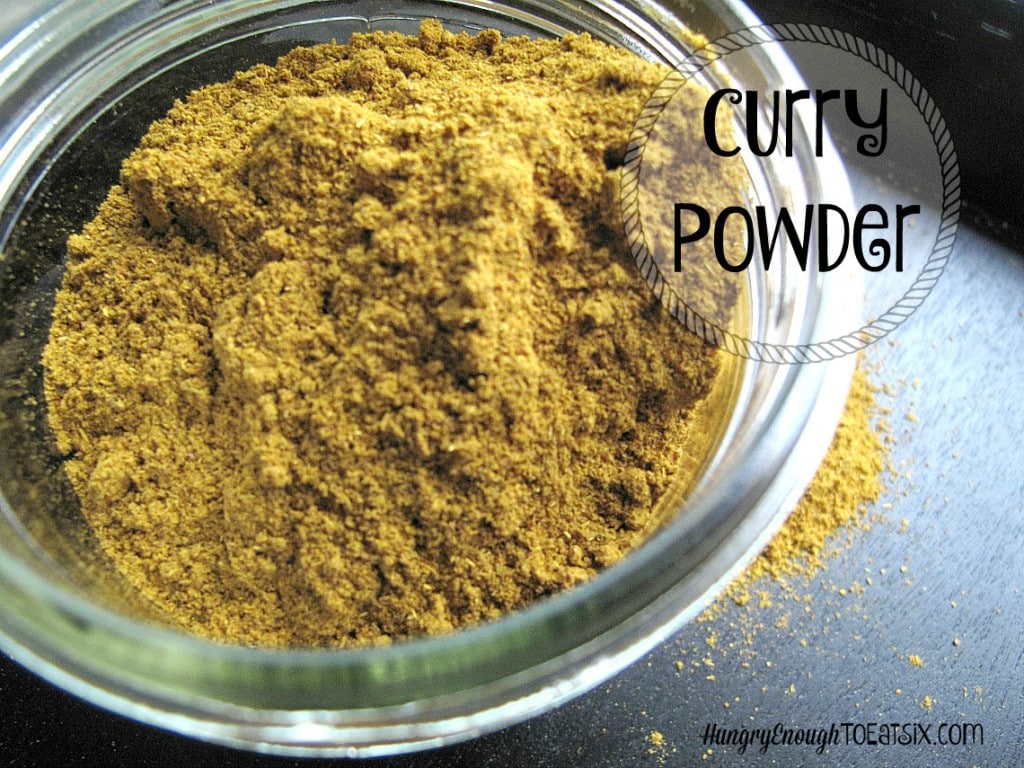 Curry: This was phenomenal in Curried Garlic Peanuts. With chicken of course it will be outstanding, such as this recipe for Cheap, Creamy Chicken Curry or in Maple-Curry Chicken with Kale. 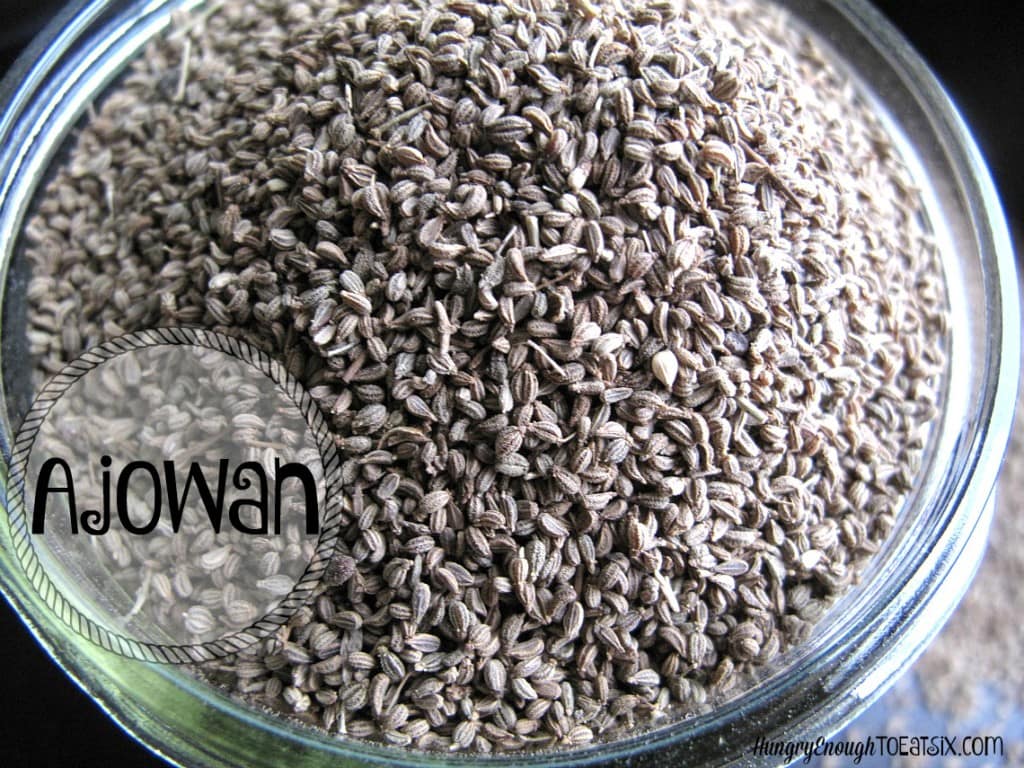 Ajowan: This will be a new one for me. Given how similar the scent is to thyme, I'm thinking of using it in place of poultry seasoning in my Chicken Pot Pie. I think this recipe for Kadhi Pakora sounds amazing, a kind of fritter in a sauce seasoned with Ajowan. This flatbread recipe, Gobi Paratha also sounds like a great way to try this spice. 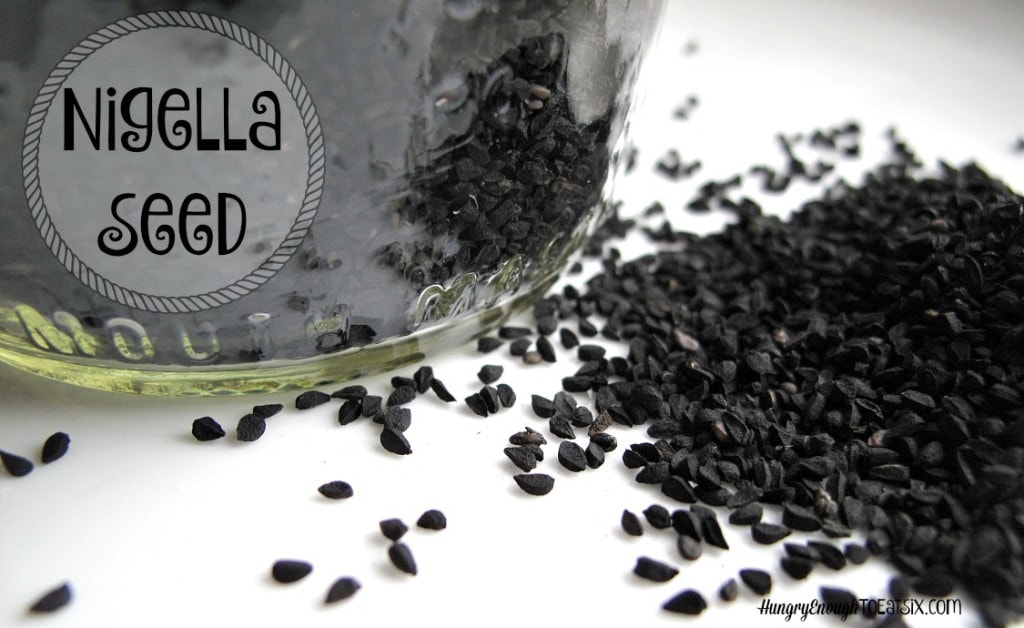 Nigella: As I mentioned above this seed added a tantalizing depth to some homemade beef and potato stew. Two recipes I've come across to try with Nigella are this Fusilli with Tahini-Yogurt Sauce and Nigella Seeds and this flatbread recipe, Indian Na'an With Nigella Seeds. 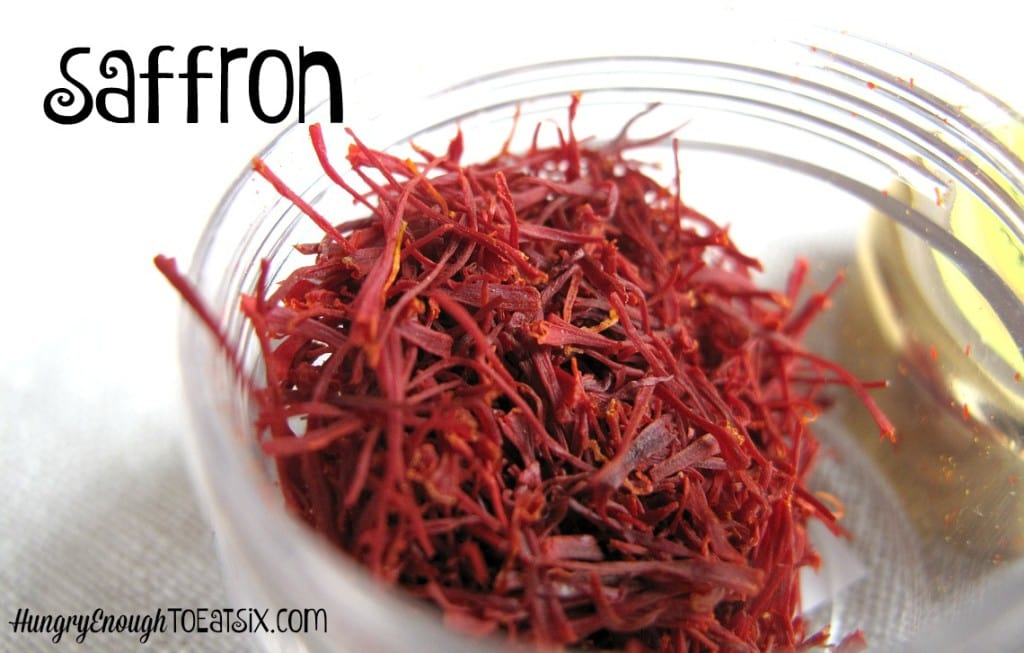 Saffron: The simplest way to try saffron from what I've read and seen online is in a simple rice dish, such as Basmati Rice with Infused Saffron. I am also looking forward to trying Roasted Garlic Saffron Aioli with Skinny Greek Feta Fries. The marinade for this Spicy Yogurt Chicken sounds incredible, and boasts a generous pinch of saffron. 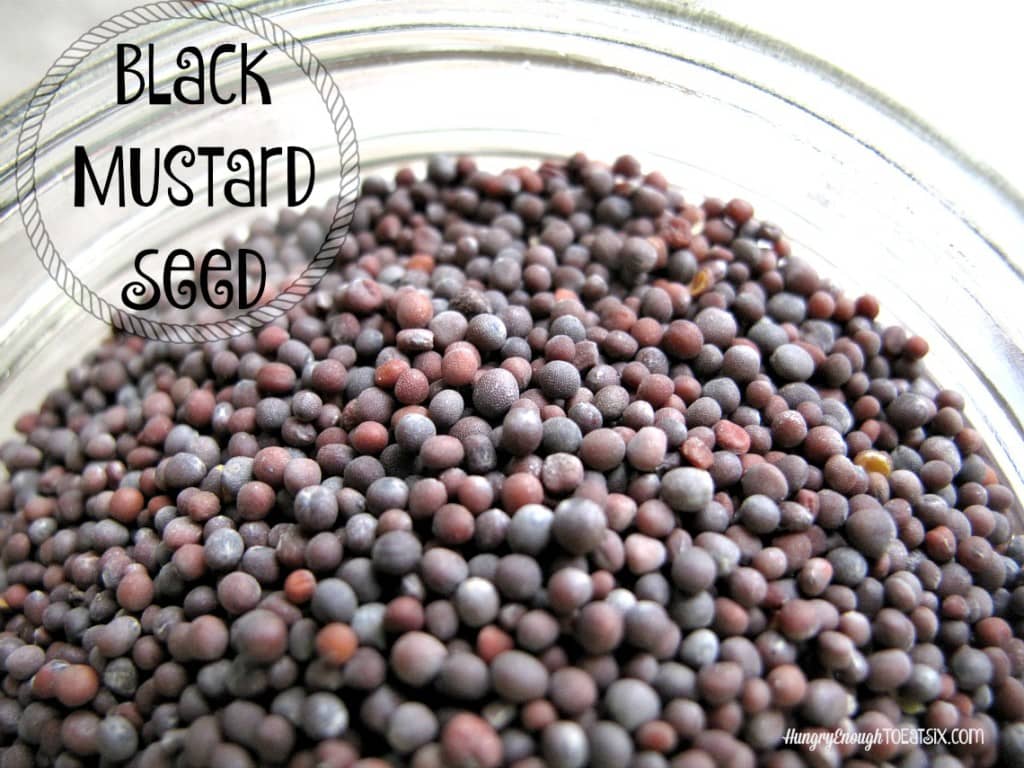 Black Mustard Seed: I think this recipe Stir-Fried Garlic Spinach with Mustard Seeds sounds like a dish with flavors simple enough to let the mustard seed flavor come through. Of course, some homemade mustard will be a fantastic endeavor: this recipe for Mustard From Scratch and this one for Whole-Grain Beer Mustard will be excellent place to start.

What are your recommendations or favorite dishes for any or all of these spices? 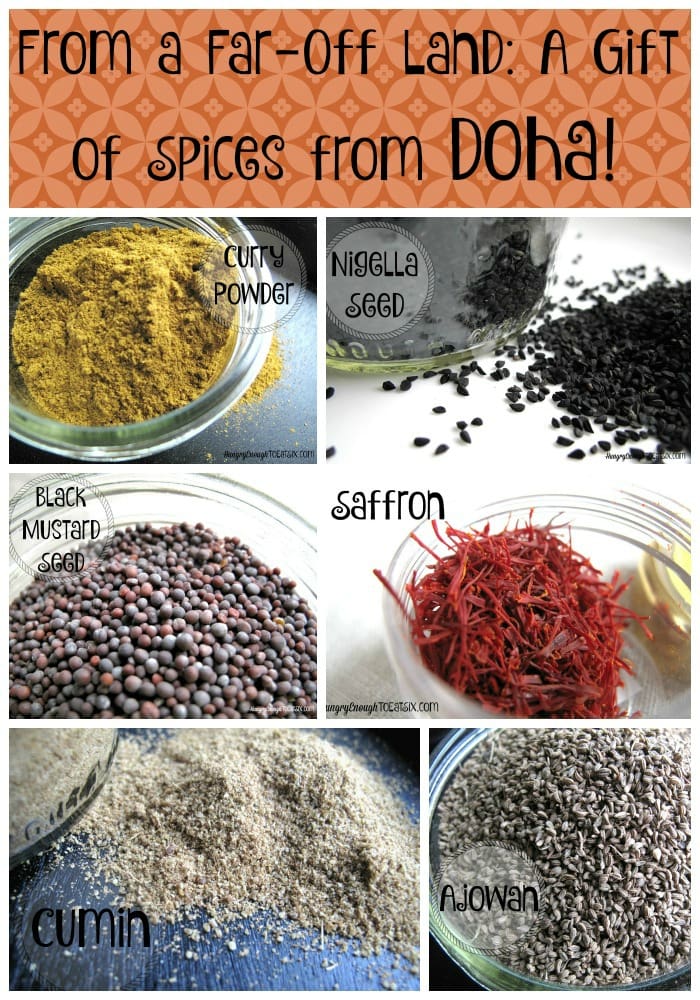