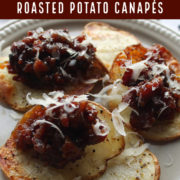 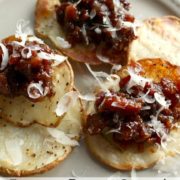 For a recent gathering of friends, I brought a little appetizer made with a freshly cooked batch of bacon jam. About a week earlier I had declared to my friend Chris that I would be making an amazing appetizer with bacon. (We had an unspoken but mutually understood competition of who would bring the better appetizer.)

That same afternoon I saw a bacon jam recipe on the King Arthur Flour site. I love savory jams on sandwiches, on toast, or with crackers and cheese. Stonewall Kitchen sells a delicious, jarred Maple Bacon & Onion Jam. Their Roasted Garlic Onion Jam has been a favorite of mine for years.

With the bacon jam recipe in my arsenal, I then worked up a little appetizer consisting of oven-roasted potato slices topped with the jam and grated Parmesan.

Why you'll love this appetizer

Yum! They are a nice combination of salty (roasted potatoes), sweet (the bacon jam is very sweet), and sharp (Parmesan cheese bite.)

And they're so easy to put together. Make the bacon jam in advance or pick up one of the jarred jams above to make it even easier.

Thinly slice potatoes and roast them in the oven until they're crisp.

Sprinkle the crisp potato slices with salt, and then top each one with a dollop of bacon jam. Shave some Parmesan cheese over each canapé. They're ready to serve!

As for our unspoken competition, Chris' wife Hillary brought a luscious, hot buffalo chicken dip to the gathering which was sinfully rich and yummy. I had quite a bit of it... so I'll concede to her that win!

Find the recipe for these canapés below. And if you want other tasty app ideas in your pocket, here are a few: 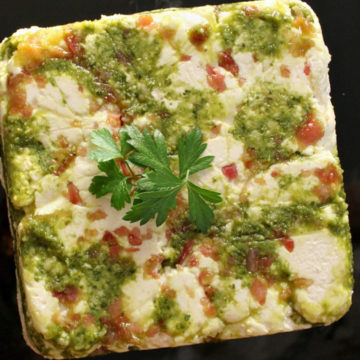 Grilled Corn and Jalapeño Queso Dip
A creamy sweet corn queso made from Jack and Cheddar cheeses with smoky grilled corn and jalapeño pepper. This dip is so good with tortilla chips!
Take me there 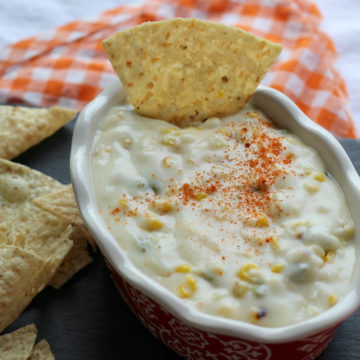 Easy Goat Cheese Spread with Pistachios & Cranberries
This cheese spread comes together so quickly, with a savory-sweet flavor and delicious bits of cranberry and pistachio throughout!
Take me there 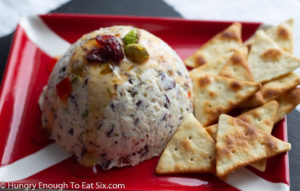 💬 Tell me how you like these canapés in the comments below! 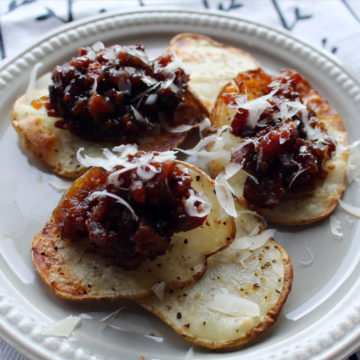