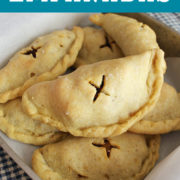 Spicy and savory, Beef Chorizo Empanadas have a hearty meat and potato filling. They're great for dinner or to warm up for a late-night snack.

Hand pies, pasties, turnovers. Hot Pockets! Little hand-held meat pies have many names but they are all so delicious. (Except the Hot Pockets.) A circle of pastry holds cooked meats plus if desired potatoes, vegetables, and seasonings.

Once baked or fried up they are a perfectly portable meal. Plus, there is always something special about ingredients tucked away in a pie crust, waiting to be discovered, devoured.

These meat-filled pies are empanadas filled with a mixture of beef, spicy chorizo, and potato. The pastry crust holding it all together is a blend of flour and cornmeal. We had these beef-filled pies with salsa and sour cream, and they were delectable.

If you can somehow keep from eating them all the night you make them, they are great to take to work or school the next day for lunch!

The dough is made with butter. If you have lard or bacon drippings on hand, you can try adding just two tablespoons in place of the same amount of butter.

At a supper pies class a few years ago at King Arthur Baking Company, we learned about using lard in pie crust. While doing this does add a savory, meaty flavor to the crust it can also make it rather rich and heavy, especially considering the meat awaiting you inside the crust.

Substituting just two tablespoons gives the savory flavor without making it so rich as to be overwhelming.

🔪 How to make Beef Chorizo Empanadas

Combine flour and cornmeal, then work cold butter into the mixture to create a dough. Wrap the dough and chill it in the fridge.

Cook and dice the potato, then cook the ground beef with the chorizo. Add in the potatoes and seasonings and finish cooking. Let the filling cool slightly.

Roll out the dough and slice out circles. Place meat filling in the center of each circle, then fold the dough over. Crimp the edges to seal them shut. Chill the empanadas while you preheat the oven.

Then serve them while they're warm!

The recipe for Beef Chorizo Empanadas is below, and I have a few other spicy treats, too! 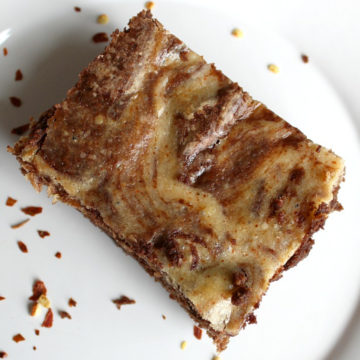 Spicy Pineapple Coconut Salsa
A vibrant and spicy pineapple coconut salsa with both sweet and heat. It's such a refreshing and delicious snack, or topping for burgers and grilled meats.
Take me there 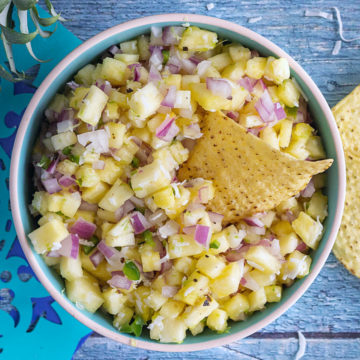 Chopped Taco Salad with Peppers, Beef & Corn
A spicy, flavorful blend of fresh corn and peppers with seasoned beef and tangy dressing. It works as both an app and a meal!
Take me there 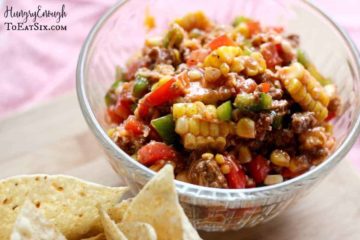 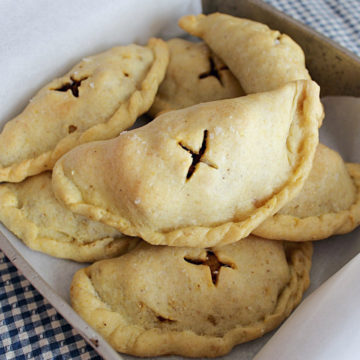