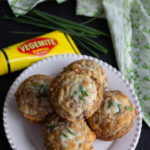 A curious, Australian spread known as Vegemite gives a mouthwatering, savory-salty flavor to these cheesy muffins.

Consider a donation to organizations that continue to help the people and animals of Australia recover from the aftermath of extensive wildfires, like WWF-Australia.

When I first created these savory, cheesy muffins it was right after I had seen a YouTube clip of American news anchors trying Vegemite on toast. Their reaction was mixed, to say the least. Opinions on this thick, savory spread are as strong as Vegemite itself, and you either love it or you hate it!

I have grown to love it, not only on toast but in these cheesy muffins.

Vegemite was invented in 1922 by Australian chemist Cyril Callister. He was hired to create a yeast extract spread similar to Marmite, an English product which was popular in Australia but difficult to import after World War I. Callister created his spread using discarded brewer's yeast from local beer breweries, and it was trademarked with the name Vegemite.

It's a very thick, dark brown paste, very salty and with a pungent smell that's challenging to describe: kind of like dark, bitter beer; a bit like a very strong cheese. And it has a bit of a burned, salty smell.

When I went shopping locally for some Vegemite I had zero luck. At one grocery store I did find a jar of Marmite, but, in the end I had to go to Amazon to get some Vegemite. And it came in a little, squeezy tube!

Armed with both Vegemite and Marmite, I found myself with a wonderful opportunity: to subject my loved ones to a taste test. (I'm sure my daughter is relieved that this taste test took place after she went back to college.)

Hugh Jackman shared his tips for enjoying Vegemite with Jimmy Fallon on The Tonight Show:

To summarize, here's what Mr. Jackman says to do:

I toasted slices of wheat bread and spread one slice with a thin coating of Vegemite, the other with Marmite. (I forgot the butter.)

The Marmite was up first, my husband and son taking the tentative first bites. Their reactions were... well, pretty much what I expected. Perhaps remembering the butter would have helped, but they both said the flavor was pretty strong and a little hard to take.

They moved on to the Vegemite toast, with understandable reluctance... and found that the flavor here was even more intense. Vegemite is thicker, more bitter, hits the back of the tongue with a slap, and is a salty, yeasty, umami overload.

My family does a lot of taste testing for me and I couldn't create my recipes without them. I feel bad because I know I burned through some trust on this one! Next time some nice and easy chocolate chip cookies guys, okay?

So maybe enjoying Vegemite or Marmite spreads straight up on toast is a challenge, but as a backdrop for flavorful Cheddar cheese and diced chives the Vegemite is very tasty!

That sharp, intense flavor is softened in the muffin batter and is a great pairing with the sharp cheese and light, oniony taste of fresh chives.

By some miracle the boys agreed to try these muffins despite the experience of yeast extracts on toast, and to my relief they agreed that Vegemite finds its redemption here.

Taste them for yourself! The recipe for the muffins is below. And here are a few other treats you'll like:

Sausage Roll Bites
An easy appetizer of pastry-wrapped sausages sliced into bite-sized portions that are perfect for your next party or gathering!
Take me there 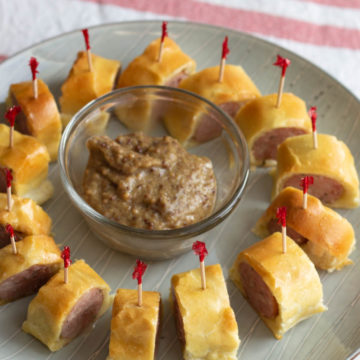 Quiche Lorraine
This is a classic quiche with bacon and Gruyère cheese, a sophisticated and more importantly, delicious choice for breakfast or lunch!
Take me there 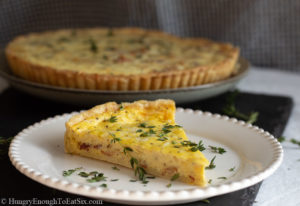 >> Have you tried these Vegemite & Cheddar Muffins? Scroll down to leave a comment and give the recipe a star rating! 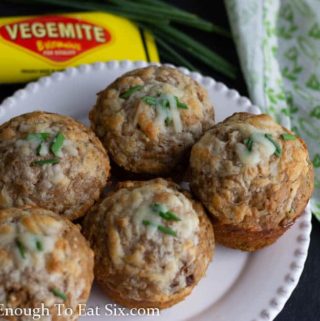