It is not hard to find rhubarb recipes right now, on blogs, recipe sites and on Pinterest. Many pair the tart, sour rhubarb with sweet succulent strawberries, and for good reason. It is a classic taste of late spring/early summer, and also suggests a relaxed, sunny country-setting in which to enjoy a big slice of pie.

On a recent trip to the grocery finding the rhubarb itself was hard, and getting out of the store with it even more so. After striking out a one local grocery, I checked a second. (Why didn’t I just go to the farmer’s market?) An enormous display of gleaming boxes of strawberries greeted me as I walked in, but there was no rhubarb in sight. After ten minutes of scouring the produce section, I finally found a few a few pieces of rhubarb tucked way in the back. Near the kale.

When I took the rhubarb to the checkout two stunned cashiers stared at the blushing stalks. I should have offered my help immediately but I guess I was feeling a little cruel that day. I waited with a smile to see if they would figure it out. The two women studied it in vain, and spun the little produce cheat-sheet cylinder bolted above the register in hopes that something logical would jump out at them.

Finally with an eyeroll they turned to me to ask what it was. I told them. And then I had to spell it. Twice. More eyerolls. I tried to explain how wonderful it tastes when combined with fresh strawberries in a pie, but they were not impressed. Eyeroll.

Though rhubarb was clearly not a favorite at this local grocery store it had a decent showing in my informal pie poll.

Strawberry Rhubarb Pie is a favorite of: 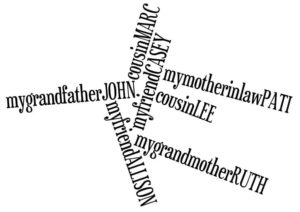