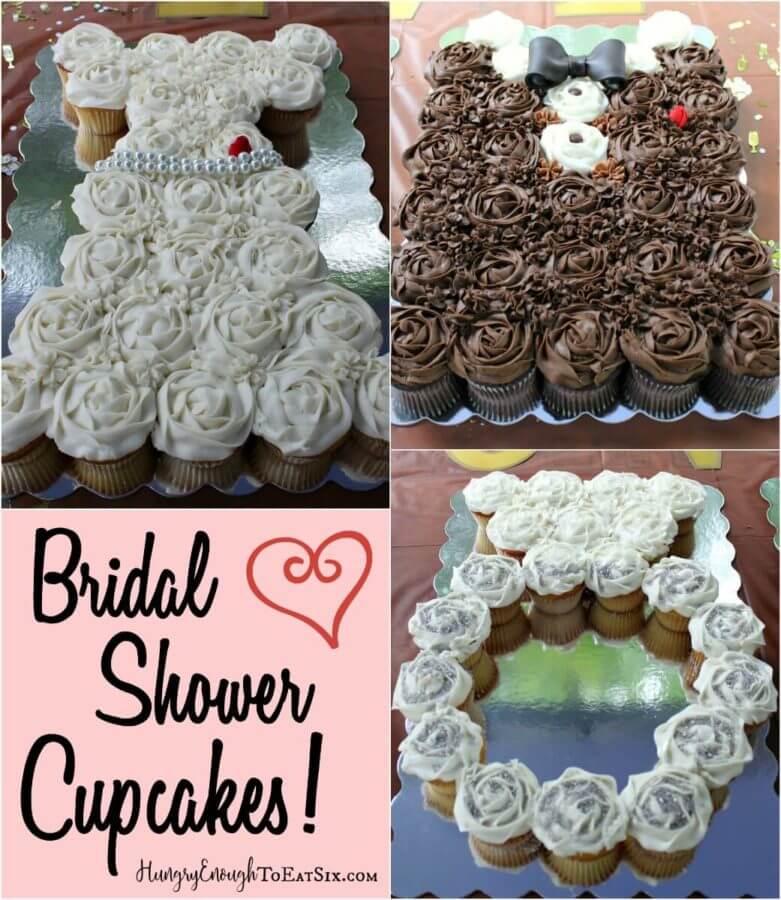 I had the honor of baking for my friend and co-worker's bridal shower!

The request was for cupcakes arranged in three designs: a wedding dress, an engagement ring and a tuxedo. A photo of the design was forwarded to me and once I started exploring on Pinterest I quickly saw that this arrangement is very popular for bridal showers. 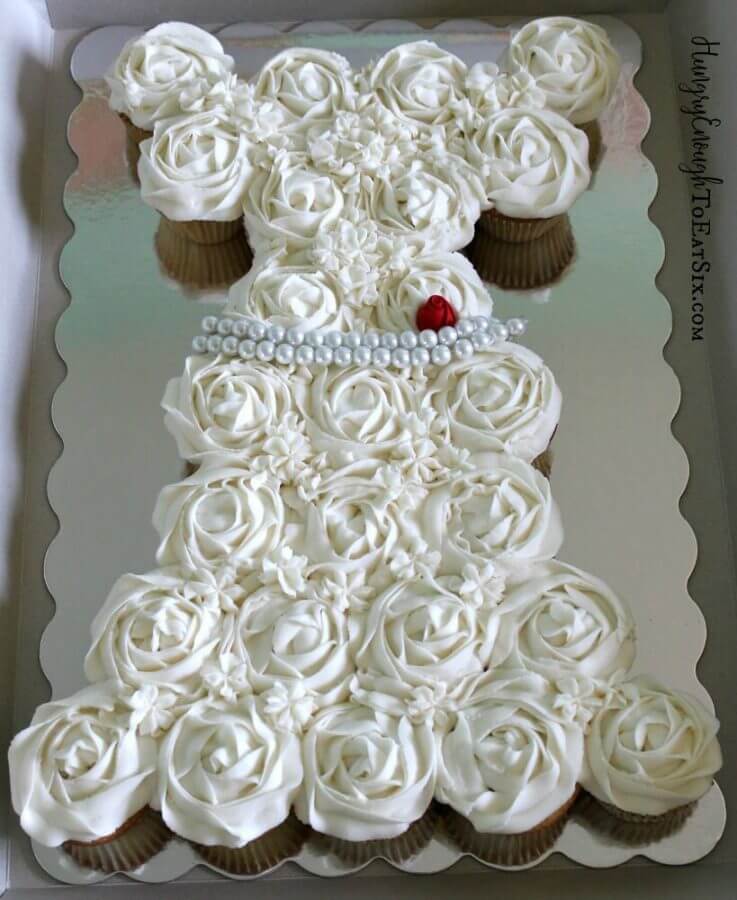 Some folks used only one or two of the designs, but I think having all three not only makes for a very eye-pleasing display, but also supplies plenty of cakes! The three designs together include 77 cupcakes, and I baked about 30 extra to cover extra guests (and to have back-ups in case of cupcake mishaps!) 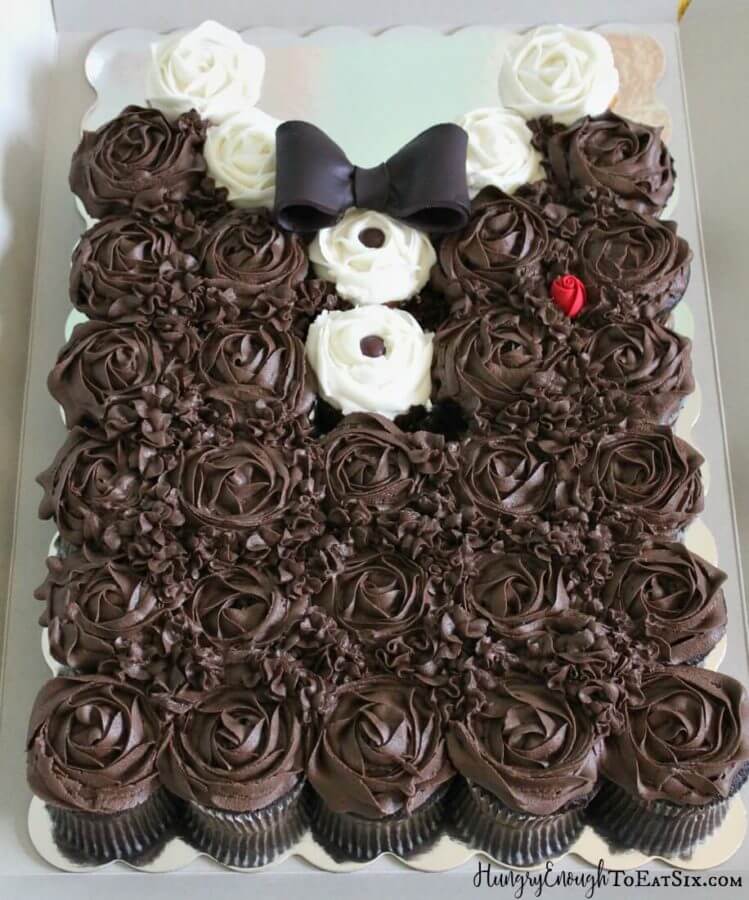 The weeks leading up to the shower included several rounds of cupcake and buttercream recipe testing. My hungry fans at home were up to their ears in tester cupcakes! A bunch also went to the kids next door and the kids in my husband's classroom. I wanted to be sure I was familiar with the recipes and that they would yield consistent results in such large quantities. The buttercream also needed testing, to be sure it would hold together in the hot, humid weather we had had.

As it turned out I needn't have worried. The day of the shower was a beautiful fall afternoon, warm but not too warm, sunny and pleasant. Perfect for a lovely, outdoor bridal shower filled with family, friends, kids, cold beverages and a tantalizing taco bar! 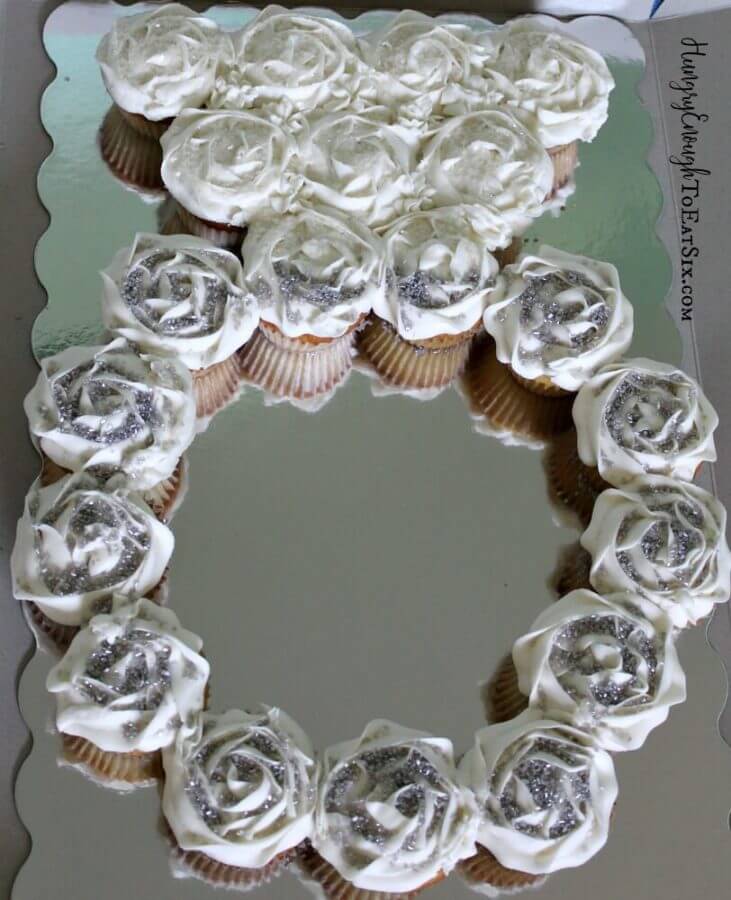 In the days just before the shower I scampered over to Michael's Arts & Crafts to get supplies. What fun it is to buy cake decorating accessories! The supplies I picked up for this arrangement were: 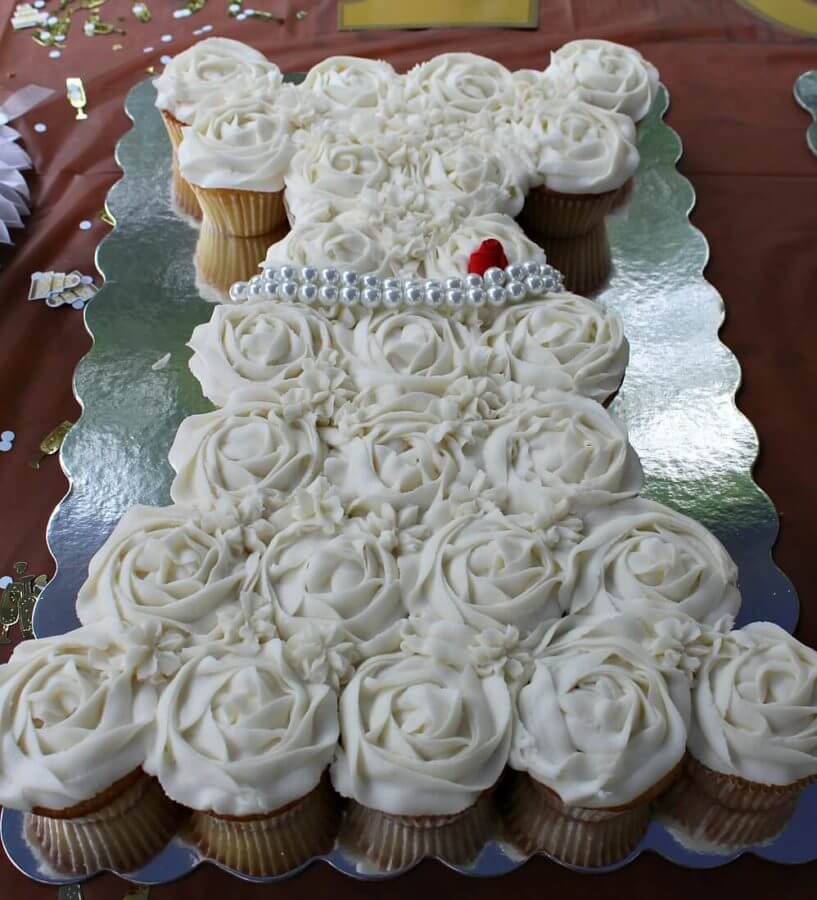 I admit to losing track of how many cupcake batches I made for the final project, but it was something like 5 batches of vanilla and 2 or 3 batches of chocolate. The total frosting (both vanilla and chocolate) was somewhere around 10 pounds! It was a sweet, sweet week. I did all the baking in one afternoon/evening, and then spent another whole afternoon/evening frosting them. 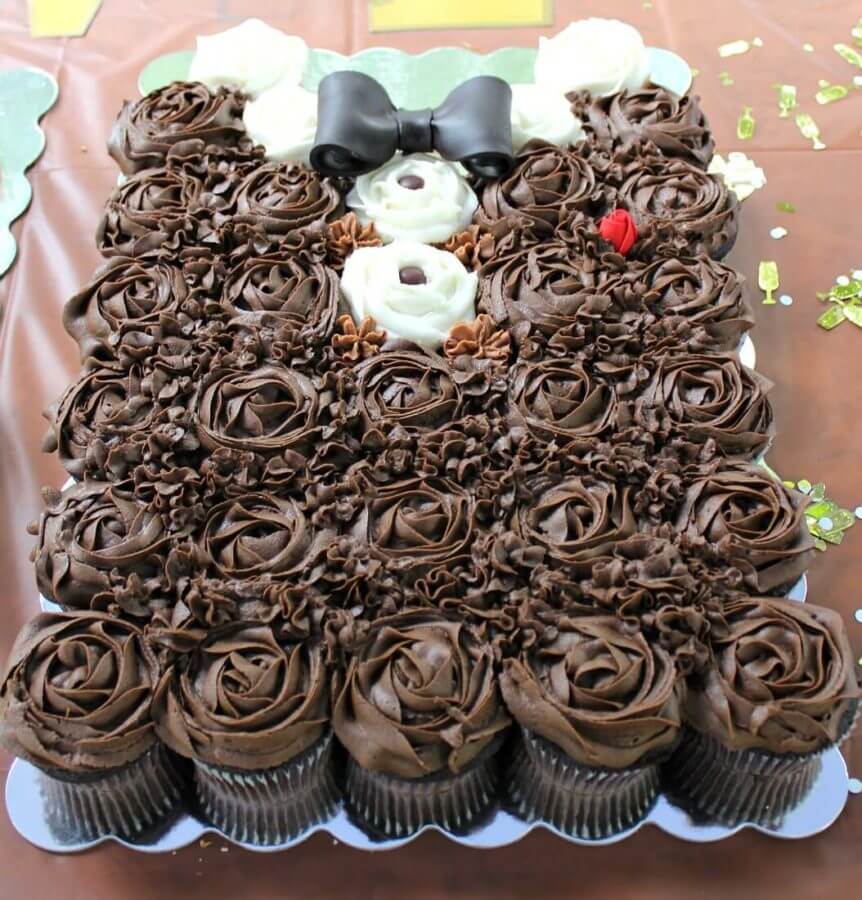 The cupcakes for the dress and for the tuxedo had small gaps between them once they were arranged on the boards. To cover these, once the cupcakes had their rose-swirled tops, I piped little bits (using the same 2D tip as I did for the rose piping) over the gaps. On the dress they look like little flowers, and on the tuxedo they gave a bit of a frill look. The gaps on the tuxedo arrangement were larger and so a little more challenging to cover. The larger ones I just put the frosting tip right into the space and completely filled them with frosting. For smaller gaps I piped around the edges of the gaps toward the centers to cover them. The next morning I found that some of these had fallen in, so I piped over them again once they were arranged at the party. (The frosting I whipped up for this quick fix ended up a lighter shade of brown than the rest - curses! But they still looked ok.)

The bow tie was shaped from a strip of the black fondant ("edible decorating dough".) I found an easy video tutorial for this, and at the very last minute too! Click here for the link. 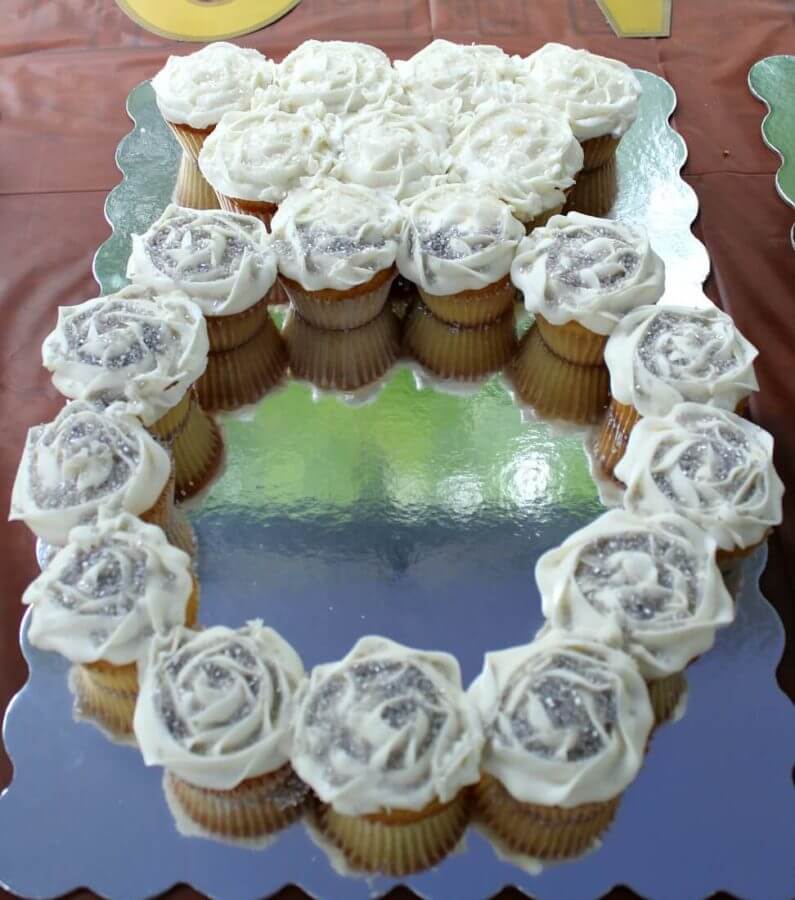 In the end I was happy with how they all came out, and folks at the party seemed to be too! They looked great on the boards and they tasted great too: moist cake and sweet buttercream.

This project is one where my family and friends really were amazing for me, helping me from start to finish. My good friend and cheerleader Donna who recommended me to the bride's sister planning the shower. My brilliant husband who thought to order a sleeve of 500 white cupcake liners for me... way, way before it occurred to me that I would need a ton of them! My husband and kids for eating all those cupcakes and giving me recipe feedback. Major credit and thanks to my sister who loaned all her decorating tips and bags to me, found a video tutorial on piping a rose design onto cupcakes (see it here,) and recommended the frosting recipe! Many thanks to my friend Heidi for helping me set up the cakes at the party, and for always being my ride. And finally, a big, big thanks to Cindel: my friend who is getting married very soon, and whose happy event made this whole project possible! 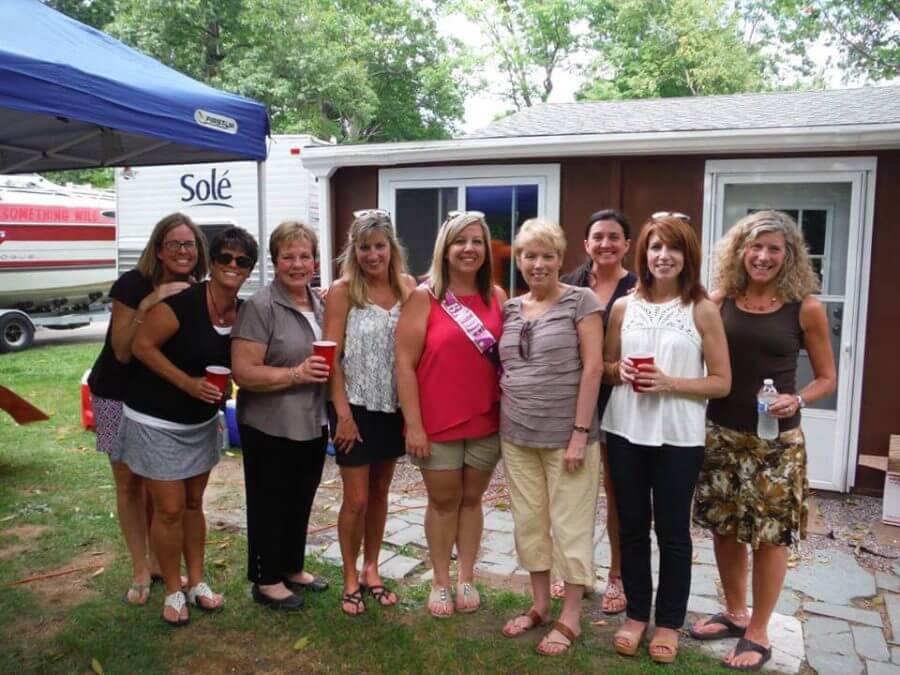